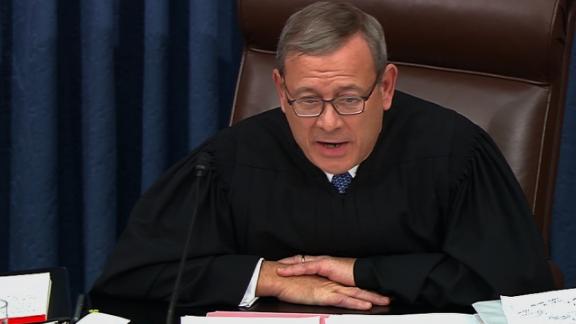 WASHINGTON (AP) — Chief Justice John Roberts drew little attention to himself in the beginning 12 hours of his first impeachment trial. But it was just before 1 a.m., as tempers on the floor had started to wear thin, that he reminded senators, House impeachment managers and President Donald Trump’s defense team who was in charge.

“I think it is appropriate at this point for me to admonish both the House managers and the president’s counsel in equal terms to remember that they are addressing the world’s greatest deliberative body,” Roberts said, after a particularly tense exchange between House Judiciary Committee Chairman Jerrold Nadler and the president’s lawyers.

Roberts asked them to “avoid speaking in a manner and using language that is not conducive to civil discourse.”

He did not say what prompted his comments, but they came after Nadler told senators that voting to deny certain witnesses in the trial, as many GOP senators had, was a “treacherous vote” and a vote against the United States. Trump’s defense team then said Nadler should be embarrassed and should apologize to the president and the American people.

Roberts’ new role presiding over the trial is one of two jobs he is juggling as the impeachment session gets underway. On Tuesday morning, he donned his black robe and oversaw two arguments at the Supreme Court before heading across the street to the U.S. Capitol where he is presiding over the trial in the Senate chamber. His busy schedule meant he didn’t have time to join his fellow justices for a group lunch, a high court custom following arguments.

And he was scheduled to be back again in the Court on Wednesday morning — just hours after the first day of the trial adjourned at 2 a.m.

“I want to say on behalf of all of us, thank you for your patience,” McConnell told him, as senators clapped.

Over the past 14 years, Roberts has gotten comfortable in the role of chief justice of the United States, but presiding over Trump’s trial is a new, public role for Roberts, who is used to proceedings that aren’t televised as they are in the Senate.

It is only the third presidential impeachment trial in U.S. history, coming just weeks before the first primaries of the 2020 election season and as voters are assessing Trump’s first term and weighing the candidates who want to challenge him in the fall.

House Democrats impeached the president last month on two charges: abuse of power by withholding U.S. military aid to Ukraine as he pressed the country to investigate Democratic rival Joe Biden, and obstruction of Congress by refusing to comply with their investigation.

Trump’s legal team has argued that the Republican president did “absolutely nothing wrong” and urged the Senate to swiftly reject the “flawed” case against him.

Roberts’ added responsibilities shouldn’t affect the work of the court. That’s because the justices generally finish their joint business in the mornings, giving Roberts time to preside over oral arguments and lead the justices’ regularly scheduled private conferences before beginning his Senate duties in the afternoon.

Supreme Court spokeswoman Kathy Arberg said in written responses to questions from reporters that it’s expected to be “business as usual” at the court during the trial.

And if there’s a good time in Roberts’ schedule to take on added responsibility, this is it, since it’s a relatively quiet time at the court. After one more oral argument scheduled for Wednesday, the court is taking its standard break from oral arguments until late February.

It’s not until later in the spring that it gets to be crunch time for opinion writing for the justices, who finish their work in June before adjourning for the summer. The court did acknowledge it scheduled only one argument Wednesday instead of the more standard two in anticipation of a possible impeachment trial. That made Roberts’ day at the court shorter.

Trump’s trial could be over by the time oral arguments resume at the Supreme Court on Feb. 24 — but maybe not. Senate Majority Leader Mitch McConnell is pushing for a quick conclusion, though there could be delays. If the trial stretches into five weeks, Roberts would be expected to be with his fellow justices in the morning and lawmakers in the afternoon.

In the unlikely scenario Roberts had to leave an oral argument, the most senior associate justice, Justice Clarence Thomas, would handle duties like calling the cases and telling lawyers to begin their arguments. But the chief justice would still participate in voting on those cases.

At the Capitol, the chief justice is using the ceremonial President’s Room as an office. It’s the same space used by Chief Justice William Rehnquist in 1999 during former President Bill Clinton’s impeachment trial. One of Roberts’ four law clerks, Megan Braun, will join him every day when he travels to the Senate, Arberg said.

Roberts’ colleagues will have to plan one celebration around his new schedule. The chief justice’s 65th birthday is Monday, and the justices generally make time to celebrate birthdays at the court. They get together to sing “Happy Birthday” and have a toast.

No word if the senators will do the same.

One city in the Wabash Valley is receiving $2.6 million in federal funding

One city in the Wabash Valley is receiving $2.6 million in federal funding