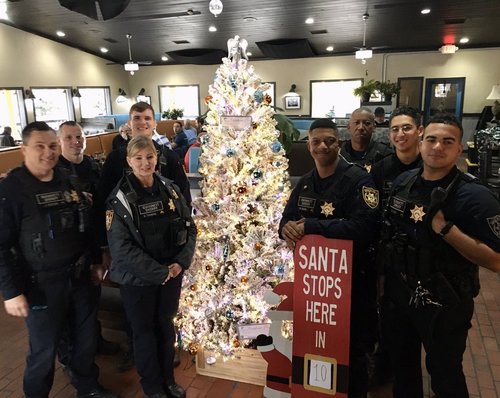 Gwinnett County (WGCL) -- Decorations, Christmas carols, and comfort food are all reasons the 5 Stop Café in Lawrenceville is a popular place this time of year... even Santa visits!

It’s where 11 Gwinnett County sheriff’s deputies chose to have lunch on Friday.

“Every so often we get together as a group, as a unit, to go out and have a meal, and this Friday happened to be the day and we just picked a place like we normally do,” said Master Deputy Michael Baker.

“We had all completed eating and the waitress came over and collected our plates and we were getting ready for the bill and she politely said, ‘you guys are all set, someone has taken care of your bill and they want to remain anonymous."

Because there were 11 of them, the deputies say, they were shocked. They knew the bill had to have been very high.

“We were kinda like are you sure? Are you serious? We were looking around trying to figure out who it was” said Deputy Stephan Santa Maria.

Waitress, Rachel Razetto was happy to see the act of kindness play out. She says the Secret Santa, was actually more than one person. It was a table of 12 men, who are regulars at the Café. She sat them at a table right next to the deputies.

“The deputies were seated first, and the gentlemen walked past them, and as they came to their table, they pulled me over and said ‘hey we’re going to take care of their bill," Razetto said.

After the deputies learned of the act of kindness, they asked Razetto if the Secret Santa(s) were still there at the restaurant. She told them they were.

“At that point they went and got thank you cards, and sheriff memorabilia, and wrote a thank you card,” said Razetto. “They all signed it, they said ‘please make sure whoever took care of us gets this’. So they were very thankful.”

But the deputies didn’t stop there. They were so touched by the gesture, they wanted to pay it forward. They pooled together all the cash they had and left the waitress a $65 tip.

“Someone passed something good on to us, so we decided we were going to pass it on to someone else” said Deputy Santa Maria. But what they didn’t know, was just how badly she needed it.

“And that… they did [leave that tip money] and the other [Secret Santa] party left a tip on that bill as well and that meant a lot to me… obviously anyone would appreciate that but um, especially now, I have young kids and right during the holidays, it was needed - and it was… I was very appreciative,” said Razetto.

Razetto tells CBS46 the deputies’ bill totaled more than $200, and since the Secret Santa table had a party of 12, their own bill was high too. All that tip money, Razetto, says was a blessing. The single mother of three, works three jobs to make ends meet.

“It came at just the right time, and I hope to pay it forward someway too.”

And with that, a single act of kindness, will be felt far beyond those it was originally intended for.

“It was just like Christmas spirit, everything about it,” Razetto said. “I’m blessed to be a part of it."

Please note: This content carries a strict local market embargo. If you share the same market as the contributor of this article, you may not use it on any platform.

One killed in Clark County crash

Some ISU students are demanding change to the school's racial culture

12-Points Car Show set for this weekend in Terre Haute

7th Annual Surviving the Color Run set for this Saturday