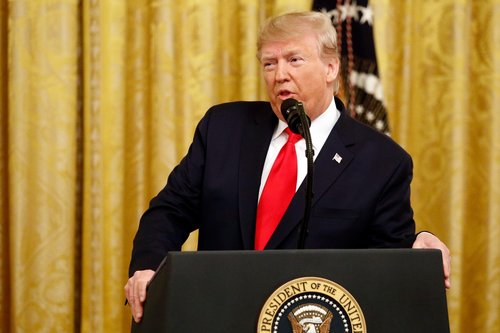 A congressional watchdog group is conducting a review to determine whether the Trump administration violated appropriations law when it froze nearly $400 mil...

A congressional watchdog group is conducting a review to determine whether the Trump administration violated appropriations law when it froze nearly $400 million in aid to Ukraine earlier this year, a decision that is currently at the center of an impeachment inquiry into the President, CNN confirmed Thursday.

Lawmakers on both sides of the aisle were caught off guard when reports of the hold first surfaced in August and the issue remains one of the key areas of focus in the ongoing Democrat-led impeachment probe.

The Government Accountability Office initiated the review after Sen. Chris Van Hollen, a Maryland Democrat, asked the US comptroller last week whether the administration violated the law by holding the funds until "the very last moment" and failing to notify Congress of the decision, according to the office's spokesman Charles Young.

The Wall Street Journal was first to report the review.

"GAO wrote an opinion back in December of last year ... where, as I understand your opinion, it would be illegal for the executive branch to hold money for the very last minute," Van Hollen said during a budget meeting on Capitol Hill, asking the comptroller if that was consistent with his understanding of the law.

"Under the law, which was passed in 1974 ... the President can propose to Congress to rescind the money. The only way that would hold is if Congress says, yes, we agree. And Congress has 45 days to respond," Comptroller General Gene Dodaro said.

"What this opinion says is if you try to withhold the money, and don't give Congress the 45 days, and the money expires toward the end of the year, that's not a proper rescission," he added.

Van Hollen followed up by asking whether the administration's failure to notify lawmakers constitutes as a violation of appropriations law. He also wanted to know what recourse Congress has at its disposal in such cases.

Those questions have prompted the GAO to conduct a review of the freeze on Ukraine aid.

The White House has offered shifting and vague accounts related to why the hold was implemented and what triggered Trump to ultimately change course and release the money.

Administration officials have tried to pin the delay on government bureaucracy. They have pointed to reviews by national security agencies and another by the Office of Management and Budget to ensure the funds were well-spent. But detailed assessments had already been conducted before Trump froze the funds in June. And there's little indication that any such process took place after Trump placed a hold on the money.

House Democrats conducting the ongoing impeachment probe have argued the President attempted to use the aid as leverage as he pressed Ukraine to investigate domestic political rivals, evidence, they say, of a quid pro quo.

Still, there are still many unanswered questions related to the events leading up to the hold and the decision to release the money.

What is clear however is that in the days leading up to Trump's decision, there was a confluence of significant events. National security adviser John Bolton was fired the day before Trump changed his mind, and White House officials had recently been made aware of a whistleblower complaint that had been filed concerning Trump's behavior toward Ukraine.

Trump was also under mounting pressure from several corners to release the money.

In a phone call on September 11, Sen. Rob Portman, R-Ohio, made one last pitch to the President, telling him that with the end of the fiscal year fast approaching, if he didn't act soon there wouldn't be time to get the money out the door, according to six sources familiar with the call.

Trump put up his usual defenses with Portman, claiming the US was getting a poor deal in Ukraine and that European allies weren't doing their fair share to help the embattled former Soviet republic, the sources said.

But in a move that surprised officials from Washington to Kiev, after months of holding up the money the President finally relented. That evening after his call with Portman, Trump released the funds.

Portman's call was part of a broader congressional campaign to push Trump to lift the hold on the aid. Vice President Mike Pence -- who was in the room with Trump when he spoke to Portman -- had just returned from a meeting in Poland with Ukraine's new president and was urging Trump to release the money.

The President and his top officials were also becoming aware of concerns inside the administration that freezing the funds was improper and could possibly lead to much bigger problems.