More than 20 million Americans under a tornado watch 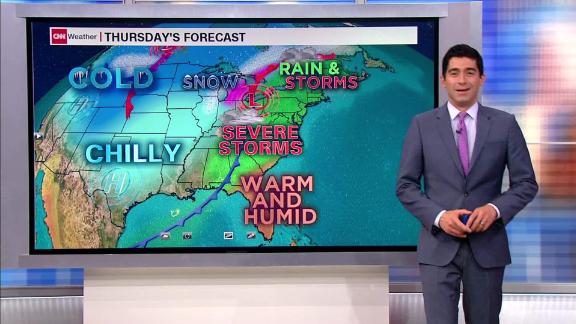 Batten down the Jack-o'-lanterns because strong winds will be impacting both coasts today. The East Coast has a risk of severe weather from Alabama to New York with the main threat being dangerous winds and isolated tornadoes. Southern California is still dealing with the strong Santa Ana winds. Pedram Javaheri has the timing and latest for both regions.

More than 20 million US residents were living in areas under a tornado watch Thursday, forecasters with the National Weather Service said.

'An extensive squall line of strong to severe thunderstorms is expected to develop during the late afternoon into this evening, near and east of the Appalachians from parts of New York to the Carolinas,' the National Weather Service's Storm Prediction Center said. 'At least a few tornadoes and scattered to widespread damaging winds are possible.'

The watch for Washington also included Northern Virginia, Maryland, central Pennsylvania and the eastern West Virginia Panhandle. The watch is in effect until midnight EDT. According to the Storm Prediction Center, 'a few tornadoes are likely with a couple intense tornadoes possible' along with 'widespread damaging winds likely with isolated significant gusts to 75 mph.'

The weather service's Twitter account for tornado information said there were warnings for about 3,000 people in West Virginia.

A tornado warning means one has been seen in person or on radar. A watch means conditions are favorable for a tornado to form.

Hi: 58° Lo: 41°
Feels Like: 41°
More Weather
Tracking showers for the morning and afternoon

COVID-19 is bringing back memories of the Spanish Flu