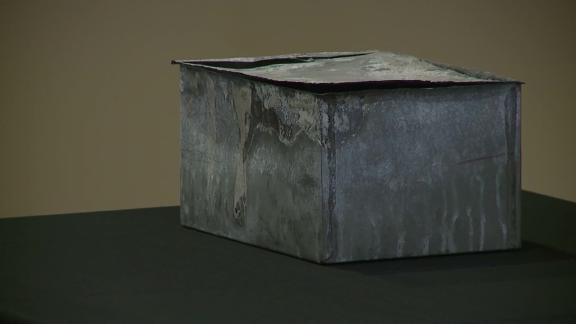 This time capsule has been through a lot.

It was first buried in Salt Lake City, Utah in 1887, after being put together by a school run by Protestants who were dedicated to converting Mormons through education.

When that school was demolished in 1959, the time capsule was uncovered. Someone opened it, but then left it at the school district office, where it sat in a closet for years.

It was finally unveiled publicly Wednesday, during an event at Utah's Division of Archives and Records.

Inside there was kind of a little bit of everything: newspapers, a list of the church's members, photographs, a student autograph book. There were even small items like a button, ribbons and a pebble.

And -- a single pristine stick of gum in its original wrapping.

"It appears that ... people were able to just drop things in at the very end," said Alan Barnett, the local government archivist who led the public unveiling. That provided people a chance to "contribute a piece of themselves," he told CNN.

The capsule tells the story of early education in Utah, and some of the conflict between Mormons and non-Mormons, he said.

But it also goes deeper, in showing the ways people want themselves and their work to be remembered, Barnett said.

"I think that's what time capsules are about," he said. "It's a way of perpetuating the memory of what they felt was really important work, of educating and converting Mormons."