Target is hiring 130,000 temp workers for the holidays 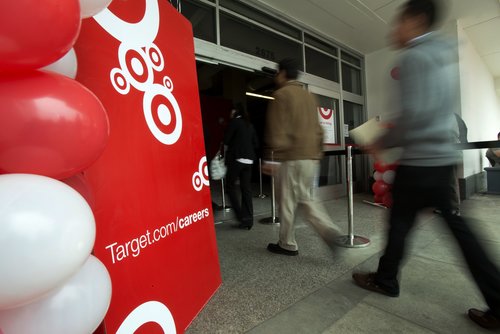 Black Friday is more than two months away. But in a...

Black Friday is more than two months away. But in a tight labor market, America's retailers and delivery giants are starting to look for seasonal help to handle the holiday shopping rush.

Target said Tuesday that it would hire more than 130,000 temporary workers for its stores and distribution centers. Last year, Target hired about 120,000 workers for the holidays. More than 40% of those employees stayed on with Target past the holiday season, according to the company.

UPS also announced plans Monday to hire around 100,000 holiday workers, roughly the same number as last year. And Amazon said it would announce its holiday hiring plans in the coming weeks. Amazon hired around 100,000 seasonal workers a year ago.

As companies have done in past years, they are relying on higher hourly wages and perks to attract workers. Target will pay $13 an hour to seasonal workers for the first time and offer them discounts at stores. UPS will offer students the opportunity to earn $1,300 for college expenses.

Finding workers to staff stores and delivery hubs could be difficult. America's unemployment rate remains below 4%.

Stores are having trouble filling job vacancies, despite a series of mass closures that have resulted in employment in retail falling by 74,000 so far this year. More than 880,000 retail jobs were open in July.

Despite the tight labor market on a national level, retailers in rural and suburban areas will be able to find workers who have lost their jobs because of mall and store closures, said Andrew Challenger, vice president of outplacement firm Challenger, Gray & Christmas.

The escalating trade war and the growing possibility of a recession have not changed retailers' hiring plans.

Although the trade war with China and tariffs on some imports have damaged parts of the economy, consumer spending remains strong. Retail sales grew 0.9% from June to July and were up 5.6% over the previous year, according to the Census Department.

"Companies tend to hire right up to a recession, so these large-scale hiring announcements are likely to occur until consumer spending begins to fall," Challenger said.

But workers' advocates are concerned that companies only hire seasonal workers on a temporary basis and that those positions hurt current part-time workers who "desperately need and want more hours," said Stuart Appelbaum, President of the Retail, Wholesale and Department Store Union.

Retailers create seasonal jobs "without needed benefits and with no intent to ever hire people on for the long term positions that they really desire," he said. "Retailers should be offering their current workers more hours before hiring thousands of temporary disposable positions."

With a US workforce of 1.5 million, Walmart, the country's largest private employer, focuses on giving additional hours to some workers during the holidays instead of bringing on new hires.