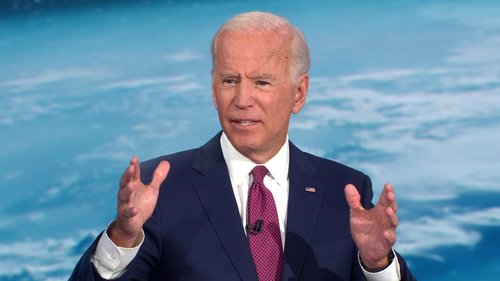 First things first: The theme song of the week is the NFL on CBS 1998 outro.

Poll of the week: A new Marquette University Law School poll from Wisconsin finds that former Vice President Joe Biden leads President Donald Trump 51% to 42% in a hypothetical matchup. Vermont Sen. Bernie Sanders is ahead of Trump 48% to 44%, while California Sen. Kamala Harris and Massachusetts Sen. Elizabeth Warren are tied with Trump at 44% and 45% respectively.

What's the point: Two things are apparent when looking at the Wisconsin and national numbers. Wisconsin leans a little bit more to the right than the nation, and Biden does better there than any of the other Democrats against Trump.

The fact that Wisconsin leans a little bit right of the nation is important for understanding Trump's re-election chances. We were reminded of an important lesson in 2016: It's the electoral college, not the popular vote that matters. Wisconsin is a perfect illustration of that. It flipped from blue in 2012 to red in 2016, when it was the tipping point state for Trump's victory. This poll suggests that it's quite plausible Trump could lose nationally and win in Wisconsin, especially if the overall political environment improves for him.

Right now, the polling says Biden -- even with his gaffes on the campaign trail -- is currently the safest bet in for Democrats to ensure Trump doesn't pull off a 2016 repeat in Wisconsin. This, of course, plays into Biden's argument about being the most electable Democrat overall, something that seems to be powering his advantage in the primary given Democratic voters are prizing electability more than usual.

Now, these numbers can obviously change, but it would be a mistake to dismiss Biden's superior numbers against Trump compared to his fellow Democrats as mere name recognition.

Looking more broadly, the other candidates don't seem to be reaching Biden's levels against Trump even as they become better known as the year carries on. Sanders has held an average 5-point lead this year in the national polls, which is near his 6-point August edge. Warren's lead against Trump in the average national poll this year has been 2 points, similar to her 3-point August lead. Harris' edge has been 1 point in the average poll this year, which is nearly identical to her 2-point August advantage.

And despite leaving the sidelines and reentering the political fray (often a bad thing for one's popularity), Biden's numbers are as good against Trump as they have been all year. Biden's current 10-point advantage over Trump is better than his average 8-point advantage this year and 8-point advantage in the polls taken this year before he declared his candidacy.

Biden's numbers are holding up significantly better than Hillary Clinton's did four years ago. Like Biden, Clinton was a former member of Barack Obama's administration who decided to come out of civilian life to run for president. And like Biden, Clinton declared her candidacy in the April before the primary season.

Clinton initially held a double-digit lead over Trump. By this point in the 2016 campaign (i.e. September 2015), Clinton's lead over Trump was down to less than 3 points in the average poll. Clinton's edge would rise and fall over the course of the next year. Eventually, she'd win the popular vote by 2 points.

In this way, Biden is following the playbook of the midterms and not Clinton. Democrats running for the House in 2018 won 90% among those who disapproved of Trump's job performance. In doing so, they took back the House. Clinton, on the other hand, won just 77% of those who held an unfavorable view of Trump.

Given Trump's approval rating has been quite consistent and hasn't been anywhere near 50%, the most likely path for a Democrat to win is take the lion's share of Trump disapprovers. Biden, for all his gaffes and flaws, continues to be the one who is doing that most effectively.