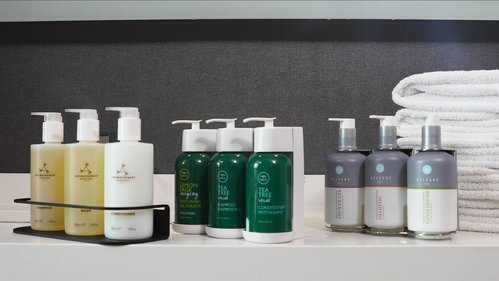 Another leading hotel company is eliminating tiny toiletries from its rooms.Marriott announced it's replacing travel-sized tubes of shampoo, condition...

Another leading hotel company is eliminating tiny toiletries from its rooms.

Marriott announced it's replacing travel-sized tubes of shampoo, conditioner and bath gel with larger bottles in an attempt to reduce plastic waste. The world's largest hotel chain said the switch is part of a larger test that it implemented in some of its North American hotels last year.

The change will affect roughly 500,000 guest rooms and will be made at most of its 7,000 hotels around the world by December 2020. Marriott owns several popular brands, including Courtyard, Ritz-Carlton, W Hotels and Sheraton.

Marriott said the small bottles currently used aren't usually recycled. Once the change is fully implemented, the hotel chain said it expects to reduce its plastic disposal by 30%, or nearly 2 million pounds of plastic it sends to landfills annually.

'Our guests are looking to us to make changes that will create a meaningful difference for the environment while not sacrificing the quality service and experience they expect from our hotels,' Marriott CEO Arne Sorenson said in a statement.

Marriott said that one pump-topped bottle contains as much liquid as a dozen single-use bottles. The new bottles will be made from recyclable materials.

Marriott's rivals have also been making changes to benefit the environment. Businesses are facing disruption from climate change and customers are increasingly demanding that products and services are environmentally friendly.

Last month, IHG, which owns Holiday Inn, said it would replace travel-sized tubes with bulk-sized toiletries beginning in 2021. Hilton Hotels previously announced that it's recycling used soap, transforming it into new bars of soap after they've been crushed and sanitized.

'We are really struggling,' Local shelter seeks help from the community during COVID-19

Bernie Sanders drops out of the 2020 race, clearing Joe Biden's path to the Democratic nomination