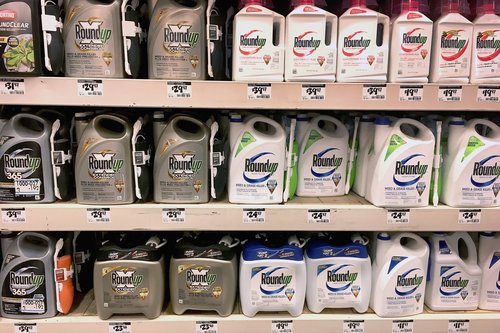 Former NFL running back and ESPN analyst Merril Hoge has filed a lawsuit against Monsanto, claiming its popular weedkiller Roundup caused his cancer...

The suit was filed this month in the US District Court for the District of Idaho. Hoge accuses Monsanto of negligence and says the company promoted "false, misleading, and untrue" statements about the safety of Roundup.

"By reason of the foregoing, plaintiff is severely and permanently injured," the suit says.

But Bayer, the parent company of Monsanto, said hundreds of studies over 40 years support the safety of Roundup.

"We have great sympathy for any individual with cancer, but the extensive body of science on glyphosate-based herbicides over four decades supports the conclusion that Roundup does not cause NHL," Bayer said in a written statement Wednesday.

The company cited an EPA decision from April, which Bayer said "reaffirmed that 'glyphosate is not a carcinogen' and that there are 'no risks to public health when glyphosate is used in accordance with its current label.'"

According to the lawsuit, Hoge, 54, was exposed to Roundup as a boy in 1977 when he began working on a farm in Idaho. For years, he mixed and sprayed Roundup on crops and other plants as part of his job duties, according to the suit.

Hoge "followed all safety and precautionary warnings during the course of use," the suit says. He was diagnosed with non-Hodgkin's lymphoma in 2003.

"Plaintiff suffered severe and personal injuries which are permanent and lasting in nature, physical pain and mental anguish," the suit says.

Hoge was the 10th round pick of the Pittsburgh Steelers in the 1987 NFL draft. He played seven seasons for the Steelers and finished his career playing a single season with the Chicago Bears. His career was cut short because of multiple concussions, and he later served as a football analyst for ESPN for two decades.

Hoge sparked controversy last year when he co-authored a book called "Brainwashed," questioning the science behind CTE, the brain disease associated with frequent head injuries and has led to lawsuits by NFL players who suffered repeated head trauma over the course of their careers.

Although Monsanto faces thousands of lawsuits over the weedkiller, only three cases have gone to trial. The jury sided with patients in each case, saying Roundup was a substantial contributing factor in causing the plaintiff's cancer.

In each of those three trials, jurors awarded the cancer patient tens of millions of dollars in damages. Judges later slashed the jurors' punishments against Monsanto, saying they were too severe.

Most recently, a California jury awarded an elderly couple with cancer -- Alva and Alberta Pilliod -- $55 million in compensatory damages (for their pain, suffering and economic losses), and a record-setting $2 billion in punitive damages (to punish Monsanto).

But last week, Judge Winifred Smith slashed the total award for the Pilliods to $87 million.

"The ratio between the compensatory award and the punitive awards were excessive," the judge said in the ruling.

Carl Tobias, a University of Richmond law professor not involved in the litigation, predicted the award would be decimated because the Supreme Court has issued guidance that "punitive damages usually should not exceed 10 times the compensatory damages."

The other two plaintiffs who have won multimillion-dollar verdicts against Monsanto have also had their awards slashed:

A judge later reduced Johnson's award to $78 million. But Johnson still hasn't seen that money because Monsanto has appealed.

-- Another California man, Edwin Hardeman, was awarded $80.27 million in March -- about $5.27 million in compensatory damages for his pain and suffering, and $75 million in punitive damages to punish Monsanto.

It's that $75 million punitive award that Judge Vince Chhabria said was too high.

"The jury's decision to award punitive damages is reasonable ... but the size of the award -- $75 million -- is constitutionally impermissible," Chhabria wrote in a court order this month. "This will be reduced to $20 million, for a total award of $25,267,634.10."

Why are so many cancer patients suing Monsanto?

Non-Hodgkin's lymphoma patients started suing Monsanto by the hundreds after a 2015 World Health Organization report suggested glyphosate might cause cancer.

The report, by WHO's International Agency for Research on Cancer, said glyphosate is "probably carcinogenic to humans."

But Monsanto has long maintained that Roundup does not cause cancer and said the IARC report is greatly outnumbered by studies saying glyphosate is safe.

"Leading health regulators around the world have repeatedly concluded that Bayer's glyphosate-based herbicides can be used safely as directed and that glyphosate is not carcinogenic ... including more than 100 studies (the) EPA considered relevant to its cancer risk analysis, and more than 800 safety studies overall submitted to regulators," Bayer said in Wednesday's statement.

The American Cancer Society said in most cases of lymphoma, the cause is unknown.

But critics question whether Monsanto has had a cozy relationship with regulators like the Environmental Protection Agency.

In a 2015 email, a Monsanto executive wrote that an EPA official at the time offered to help stop another agency's review of glyphosate, saying "If I can kill this, I should get a medal."

But a Monsanto spokeswoman responded at that time that the company has never paid, given gifts to or done anything else to curry favor with the EPA.

Bayer said it believes the recent surge in plaintiffs -- to 18,400 -- is largely spurred by plaintiffs' attorneys.

"The increase in the number of plaintiffs over the past quarter is likely driven by the substantial spike in anti-Roundup advertising sponsored by plaintiffs' lawyers and lead generators over this same period," Bayer said in a statement to CNN.

"The plaintiffs' advertising spend more than quadrupled in the second quarter compared with the first quarter of 2019, from $4.356M to $19.020M according to X-Ante, a company that monitors litigation advertising."