What Trump's China trade war means for you 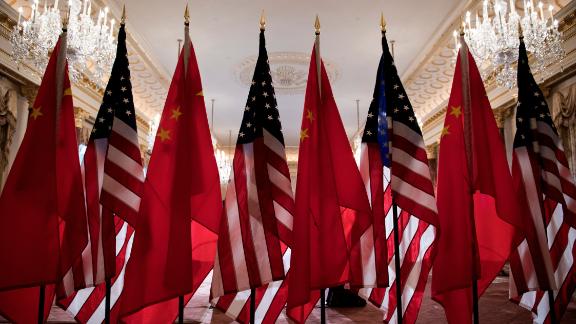 CNN's Christine Romans and Grant Thornton Chief Economist Diane Swonk discuss what the impact of President Trump's new tariffs on China will have on US consumers.

Now might be a good time to buy a new laptop, iPhone, or TV.

Prices for those and other Chinese-made products might go up after September 1, when President Donald Trump says he will put new tariffs on another $300 billion of imports from China.

The new round of duties could hit American consumers harder than a first round of tariffs imposed by Trump last year, which mostly hit industrial materials rather than everyday goods.

What could get more expensive?

Shoppers could see the price of consumer electronics, clothing, shoes, and toys go up because American businesses import a significant portion of those goods sold in the United States from China.

Smartphones, laptops and tablets, desktop computers, video game consoles, TVs and digital cameras are all on the tariff list.

About 42% of apparel sold in the United States would be hit with the tariff, as well as nearly 70% of all footwear, according to the American Apparel & Footwear Association.

New Balance, for example, has warned that the tariffs could even make the sneakers it manufactures in the United States more expensive because it needs to import component parts from China that are no longer made domestically.

The tariff could also raise the price of some of the upcoming holiday season's most popular toys, which are typically shipped into the country in August and September, said Toy Association President Stephen Pasierb.

About 85% of the toys sold in the United States are made in China, including the top-selling L.O.L. Surprise doll. Toy giant Hasbro has already warned that it would have to raise prices if the tariffs go into effect.

The price could go up on thousands of other goods if the new tariffs go into effect in September. Fireworks, fish, and Bibles would also get hit.

Who pays the tariff?

As he has many times before, Trump on Thursday claimed — falsely — that the tariffs have cost China rather than American consumers.

"We're taking in many billions of dollars. There's been absolutely no inflation and frankly it hasn't cost our consumer anything. It cost China," Trump said in remarks to reporters at the White House, adding that companies are now moving out of China to avoid the tariffs.

But economic studies show that US consumers, not China, are bearing the weight of the duties. The White House's most recent Economic Report of the President, released in March, acknowledged that any benefit from the tariffs is offset by "costs paid by consumers in the form of higher prices and reduced consumption."

Some US companies are moving production out of China to avoid paying the tariff. But instead of moving back to the United States, they usually move elsewhere in Asia. Imports have significantly increased this year from Vietnam, Taiwan, Bangladesh and South Korea.

For those American businesses that don't move out of China — a process that could take months, if not years — they must decide how much of the added tariff cost to absorb and how much to pass on to consumers.

Trade negotiations are ongoing and Trump could opt to hold off on putting new tariffs in place in September. He first threatened to impose the additional taxes in May, and then said the threat was off the table after meeting with Chinese President Xi Jinping in June.

But this week he reversed course again, after his trade team returned from talks in Shanghai. The president wasn't pleased that China had not offered concrete promises to purchase American agricultural products during the talks.

Trump said Thursday that the new tariff would start at 10%, but could eventually go up.

"It can be lifted in stages so we're starting at 10% and it can be lifted up to well beyond 25%," the President said. "But we're not looking to do that, necessarily."

Walmart, Costco, Target, and hundreds of other companies have asked the White House to remove existing tariffs and said that new taxes would have a "significant, negative, and long-term," impact on American families and businesses.

One report estimates that the tariffs are already costing the typical US household more than $1,200 a year — even before new tariffs might be levied in September. When Trump increased tariffs in May, it hit some consumer goods including luggage, bikes, handbags, hats and baseball gloves.