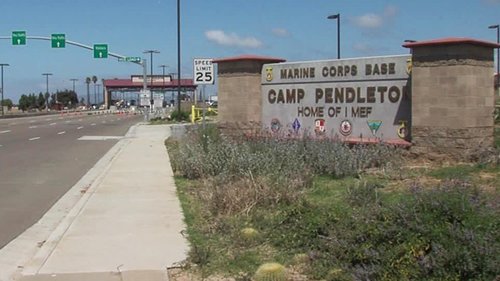 An additional eight Marines were taken aside to be questioned on their involvement in alleged drug offenses unrelated to Thursday’s arrests, Motz said.

Those arrested were taken into custody during a Battalion formation at Camp Pendleton by 1st Marine Division worked alongside the Naval Criminal Investigative Service, officials said.

10News learned the Marines that were arrested have not been charged at this point in the investigation.

Both men are charged with smuggling “for the purpose of commercial advantage or private financial gain,” the complaint said.

In the complaint, agents reported seeing three undocumented immigrants getting into the pair’s vehicle on Interstate 8 on the morning of July 3. The vehicle was pulled over a short time later and all five occupants were arrested.

The immigrants, according to the complaint, told agents that they paid $8,000 to have Law and Salazar-Quintero take them north.

Sullivan man sentenced for voyeurism at a local tanning salon

Online classes and playing sports: you can't do both

Keeping your house cooler without running the A.C. all day

Shortage of court reporters: Officials offer classes for people to explore the job

Keeping your house cooler without running the A.C. all day

Duke Energy says scammers have a new tactic to steal your information, and it involves refund checks

Sullivan man sentenced for voyeurism at a local tanning salon