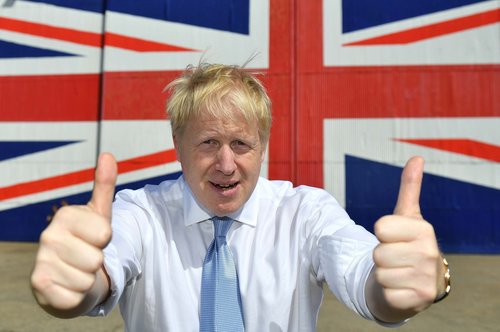 Hardline Brexiteer Boris Johnson has won the UK's Conservative Party leadership contest and will take over from outgoing Prime Minister Theresa May when she steps down on Wednesday.

Johnson, a former Mayor of London and British Foreign Secretary, took 92,153 votes, while rival Jeremy Hunt scored 46,656 votes in a ballot of party members. Turnout was 87.4% with Johnson taking 66% of votes.

'Today the campaign is over and the work begins,' Johnson said in a speech immediately after the results were announced Tuesday.

Turning his attention to Brexit, Johnson said that he read in the Financial Times newspaper that no new leader has ever faced such a daunting set of circumstances.

'Do you feel daunted?' he asks the crowd. 'You don't look daunted to me.'

US President Donald Trump was quick to congratulate Johnson in a tweet, saying: 'He will be great!'

Indeed, Johnson's father Stanley told CNN that he thinks his son will get along with Trump -- but warned that the relationship cannot be subservient.

'They have the same hairstyle,' he said of the leaders.

'We're going to have to be careful not to be too slavishly geared to America,' Stanley added, insisting that 'building bridges' with Europe after Brexit will also be crucial.

Outgoing British Prime Minister Theresa May -- who Johnson has long been a critic of -- tweeted her congratulations to the new party leader, promising him her 'full support.'

Likewise, Johnson said in his acceptance speech that it had been a 'privilege' to serve in May's cabinet.

Top of Johnson's agenda as new prime minister will be resolving the Brexit deadlock, where his predecessor failed. The European Union's chief Brexit negotiator, Michel Barnier, tweeted that he was looking forward to 'working constructively' with the new leader.

The leadership vote was triggered after an embattled May was forced into resigning after losing the support of her cabinet, many of whom were fed up with her inability to secure the UK's departure from the European Union (EU).

As prime minister, Johnson, 55, will inherit the same problems of a deeply divided Parliament -- and nation -- when he assumes the role.

Throughout his leadership campaign, Johnson was vocal about his willingness to exit the EU without a deal, pledging to leave 'do or die' on October 31, the latest deadline for the UK to depart the bloc.

He said that he'd be willing to force Brexit through on that date by suspending Parliament, if he's unable to negotiate a new exit deal with EU officials.

The EU has said there is no chance of reopening the Withdrawal Agreement, the deal that May made with the bloc in 2018 but which has failed to satisfy both the Europhile and Euroskeptic wings of both the Tory party and Parliament.

While Johnson's stance on Brexit have defined his leadership bid, his incendiary remarks on religion and race have sparked criticism about his character.

Writing in his weekly column in the British newspaper the Daily Telegraph last August, he likened Muslim women wearing veils to 'letter boxes' and 'bank robbers.'

Earlier this month, he faced new accusations of Islamophobia after claiming in a newly-unearthed 2007 text that Islam left Muslim countries 'centuries behind' the Western world.

Previously, Johnson called people from the British Commonwealth 'flag-waving piccaninnies,' referred to the 'watermelon smiles' of people from the Congo, and suggested that former US President Barack Obama held an 'ancestral dislike of the British Empire' because he was 'part-Kenyan.'

And, as foreign secretary, erroneous comments he made about Nazanin Zaghari-Ratcliffe -- a British-Iranian charity worker who was arrested on spying charges in Iran more than three years ago and remains detained -- could have damaged her case.

During the 2016 campaign for Britain to leave the EU, Johnson was accused of lying to the public by stating that the country's membership of the bloc cost £350 million ($442 million) a week.

That controversial claim was plastered on the side of a bus that toured the UK prior to the vote that resulted in a 52-48% result in favor of Brexit.

Johnson's hardline stance led to Foreign Office minister Alan Duncan resigning on Monday -- and it is expected to trigger several more resignations in the coming days.

'It is tragic that just when we could have been the dominant intellectual and political force throughout Europe, and beyond, we have had to spend every day working beneath the dark cloud of Brexit,' Duncan said in his resignation letter.

Rory Stewart, the UK International Development Secretary who made a high-profile but unsuccessful bid to lead the Conservative Party, also reiterated on Monday that he would resign rather than serve under Johnson's leadership.

And last week, both the Chancellor of the Exchequer Philip Hammond and Justice Secretary David Gauke confirmed they will step down before Johnson becomes prime minister.

Was the Vigo County School Corporation referendum necessary? We asked the superintendent