Who won the Democratic debate 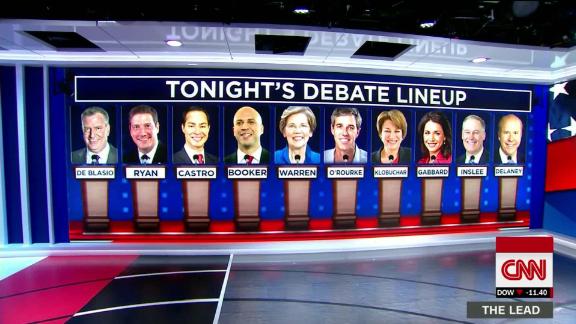 (CNN) -- The first debate of the 2020 Democratic nomination fight is in the books!

With 10 candidates onstage, their answers limited to 60 seconds and most of the candidates unwilling to engage one another, the debate was less a debate than a series of one-minute speeches.

I watched the whole thing and picked out some of the best -- and the worst -- from the night that was. (And I'll be doing the same in Thursday's debate!) They're below.

* Julián Castro: The former San Antonio mayor had been running below the radar -- WAY below the radar -- until Wednesday night. That is likely to change after his performance, in which he was able to carve out a remarkable amount of speaking time for a candidate polling somewhere between 0% and 1%. (An hour into the debate, Castro had spoken as much as Sen. Elizabeth Warren of Massachusetts, who is in the midteens in national polling, according to a count kept by The Washington Post. Hugely helpful!) Castro's battering of Beto O'Rourke on immigration was hard to watch (especially if you were related to O'Rourke), but a clear win for Castro.

* Elizabeth Warren: Yes, she got more questions than anyone else. And, yes, she didn't directly answer all of them. But Warren -- especially in the early parts of the debate, when the most people were watching -- was the straw that stirs the drink in the debate. (She did disappear somewhat in the second hour.) The debate began on home turf for her -- talking about economic inequality. And Warren's hand-raising when all of the candidates were asked whether they supported abolishing private insurance (only Bill de Blasio joined her) was a strong message to liberals watching that she was proud of who she was and what she believed. Warren came into the debate with the momentum in the race. Nothing she did on Wednesday night will stop that momentum.

* Cory Booker: The senator from New Jersey won't be the big star coming out of Wednesday's debate -- my guess is that Castro will be that person -- but he found a way to inject himself into most of the conversations during the night -- even those where he wasn't directly asked. Booker had the most talking time of any of the 10 candidates; talking the most isn't always a sign of victory, but when you are someone like Booker who is just trying to get his name out there, it's a pretty good measure. One caveat: For all of that talking, is there a memorable line from Booker coming out of this debate? I don't think so.

* Beto O'Rourke: Hard to watch. Badly out of his depth from a policy perspective. Too rehearsed in his answers. The idea of him starting his first answer of the debate by speaking Spanish might have seemed like a good idea in his debate prep room but it played as pandering and overly planned in the moment. If one of O'Rourke's goals coming into this debate was to show he was more than a good-looking but sort of empty vessel, it, um, didn't work.

* NBC's sound people: It's never a good thing when there are hot mics when there shouldn't be. It's even worse when the tech people can't fix that problem quickly and you have to go to an unplanned break. And it's disastrously bad when the President of the United States takes to Twitter to say this: ".@NBCNews and @MSNBC should be ashamed of themselves for having such a horrible technical breakdown in the middle of the debate. Truly unprofessional and only worthy of a FAKE NEWS Organization, which they are!"

* 10-person debates: Within the first 10 minutes of the debate, it was clear that 10 candidates onstage is too many. It's just not possible to get any clear sense of a) who the candidates are or b) what they believe with so many of them onstage. I understand that the Democratic National Committee wanted to welcome as many candidates as possible, but I am already looking forward to the fall debates where the DNC's more stringent qualifying criteria mean there may be fewer candidates onstage.

* O'Rourke: I know I already named him as a "loser." But he was so bad that he needs to be on the list twice.

* Amy Klobuchar: I had high expectations for the senator from Minnesota because she has shown the capacity to rise to the occasion: Witness her star turn in the Brett Kavanaugh confirmation hearings. But she just never really got started. She tried a few canned lines ("Uncle Dick in the deer blind," "All foam, no beer") but none of them really hit. I'm interested to see whether Klobuchar is able to qualify for the next debate after this so-so performance.

* Bill de Blasio: If interrupting as rudely as possible was an Olympic sport, the New York mayor would be the gold medal winner.

CORRECTION: This story has been updated to reflect that the number of candidates who qualify for a spot onstage at the Democratic debates may not narrow until this fall when the DNC has made the qualifying criteria more stringent.

Golden Corral in Terre Haute to reopen - with some changes

Business welcomes families back inside