What Trump is good at 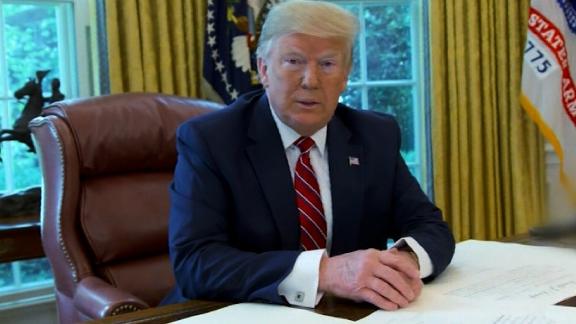 In the middle of his interview with ABC, President Donald Trump asked his acting White House chief of staff Mick Mulvaney to leave the room after he coughed.

The soothsayers brought the king bad news. Rival Joe Biden was leading President Donald Trump in key battleground states. After the press began to report the facts, Trump first tried to say the polls just didn't exist. When this claim was refuted, his campaign abruptly fired the pollsters. Welcome to the launch of the Trump re-election campaign, which promises more of the chaos we've come to expect from the man in the Oval Office.

If the past four years have taught the world anything, it's that it's never safe to assume that anything with Trump is simple and straightforward. His main talent involves ignoring facts, shaping a marketing message, and making sure he and his team stick to it.

Trump is a propagandist and he's really good at it. Hence his humiliation of his acting chief of staff Mick Mulvaney whom he scolded for coughing during an interview. True to his showman's style, after Mulvaney departed Trump did a new take for the camera, making the same point that had been interrupted by the hacking.

As part of his method, Trump demands that those who serve as his chorus loyally repeat his claims and refuse to contradict him. In his world, people seem to always scramble to make him happy and the President's moods and his fantasies are the most important things. So it is that aides repeat the fiction that Trump was fully exonerated by special counsel Robert Mueller's report on the 2016 election even though the opposite is true.

The pollster purge followed a familiar pattern. The people who serve him deliver unsettling facts, which reporters also learn. Devoted to his image as a winner, Trump publicly refutes the truth. When this position become untenable, heads roll. These dismissals were couched in terms of campaign security. Someone had leaked news of the President's lagging performance and leakers won't be tolerated. Then, lo and behold, two of the fired pollsters are immediately hired by a pro-Trump campaign organization.

The soft landings offered to the two pollsters will keep them in the pro-Trump camp, where they can be expected to please him by keeping their mouths shut about the President's possible weaknesses and stay on-message with the boss, parroting his version of reality no matter what the facts indicate. This is how a citizen of Trumpworld survives.

No one hews to his own version of reality with more devotion than Donald Trump. He made this clear four years ago as he announced his candidacy with a disjointed and rambling talk seasoned with distortions and outright lies. He said the Mexican government was 'sending' immigrants who are rapists and murders and drug dealers to terrorize America. Unemployment was not 5.6% as reported by the government but '18 to 20%' and prisoners taken by the US in Afghanistan had been released and become fighters.

Trump's claims about immigrants, unemployment, and the freed prisoners were all false and these distortions combined with his kitschy stagecraft -- riding down to the crowd on a golden escalator, hiring extras to cheer -- to make him seem like a cartoon figure. What Trump seemed to know, which others did not, was that his words would feel true to many Americans who disliked immigrants, were unsure about their jobs, and feared terrorists. He also understood that a big, bold, even cartoonish presentation might be required if he was to touch the emotions that would energize voters. He would delegitimize the fact-checking press as 'fake news,' attack his opponents with childish nicknames, and degrade the campaign with lie upon lie.

No presidential candidate in memory practiced incitement and demagoguery in the dangerous way that Trump used them in 2016. As he called for his crowd to meet protesters with violence and suggested his opponent be imprisoned, Trump alienated the majority of voters, who gave Hillary Clinton a substantial popular vote win. However, he cultivated just enough support in key states to win the Electoral College.

Trump's success affirmed for him that his methods, borrowed from his life's work as a promoter and pitchman -- were right. With re-election in mind, he made life so difficult for sober, fact-based realists like Defense Secretary James Mattis and Secretary of State Rex Tillerson that they fled his administration. Left behind is a cadre of yes-men and yes-women whose preoccupation must be to stay aligned with the boss.

What the boss must want now is to be re-elected. This desire doesn't seem to be based on his drive to accomplish a big goal -- can you name one? -- or serve the country in some special way. If these were foremost in his mind he would have made it clear. He is far more likely to be driven by the existential dread of defeat and joining the tiny list of presidents who have been denied a second term. These men are losers in his eyes, and there's nothing Trump hates more than losing.

Trump's formal re-election campaign launch, set for Tuesday night in Orlando, Florida, will be yet another theatrical occasion. No one should doubt that it will be accomplished with impressive lighting and stage sets. If there's no golden escalator available Trump will find some other way to make the moment visually compelling, and his rhetoric will likely be more fiery than factual, more petulant than presidential.

How do we know that Trump will give us the same kind of performance he offered in 2016? Consider that he has continued to hold the same kind of rallies and deliver the same kind of talk he offered back then and you know what's coming next. Heedless of the negative side effects including the division and fear he sows, Trump knows no other way. He will be hyper-partisan and hyperbolic and he will expect the mesmerizing magic to work again.