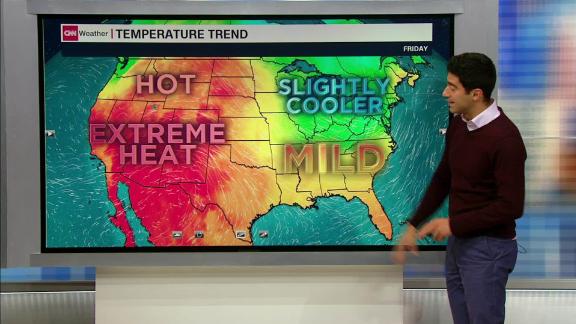 The temperatures will be cooling off for people in the eastern US with a front that is going to bring a storm threat to the Plains today. The opposite can be said for the folks on the West Coast as near record heat can be felt all the way into Washington State. Pedram Javaheri has the latest forecast.

The next time you fly into Louisville, Kentucky, you'll be greeted by a familiar face: Muhammad Ali.

The House Judiciary Committee is having itself quite the week. The committee held a hearing yesterday on the Mueller report (without former special counsel Robert Mueller). Watergate figure (and CNN contributor) John Dean testified at the hearing, and he compared President Trump's behavior to President Nixon's. He also said the report gave Congress "a road map" to impeachment.  Meanwhile, Judiciary Committee Chairman Jerry Nadler said he's struck a deal with the Justice Department that will allow Congress to get its hands on some documents from the Mueller report related to obstruction of justice. That will head off, for now, a court showdown between House Dems and the Justice Department.

Meantime, a Judiciary subcommittee holds a hearing today on Big Tech and how it's affecting and influencing the news media. The hearing is part of an effort by newspapers and online publishers to get an antitrust exemption, which would allow them to band together and negotiate with the Googles and Facebooks of the world.

There are renewed calls to ban helicopter flights over Manhattan after a copter crash-landed on the roof of a building. The crash sparked a fire and killed the pilot. Visibility was poor in the area at the time, with moderate to heavy rain falling. New York banned helicopters from landing on rooftop helipads after a disaster in 1977. Today, helicopters come and go from three heliports on the island's periphery. Many New Yorkers said they immediately thought about 9/11 when they heard that an aircraft had crashed into a building.

The nation's two largest religious groups are holding meetings this week, and both will be talking about the same thing: sexual abuse by clergy. The US Conference of Catholic Bishops starts a four-day spring meeting today in Baltimore, while the Southern Baptist Convention convenes in Birmingham, Alabama. Both denominations are reeling after internal investigations and journalistic exposés revealed scandals that harmed their members and stained their reputations. The Catholics are expected to focus on accountability for bishops, while the Baptists want to fight an attitude of "casual indifference" that's allowed sexual abuse to continue.

Add Canada to the growing number of countries that are banning plastic. Prime Minister Justin Trudeau said the country will ban single-use plastic items by 2021. So, that means no more plastic bags, straws, cutlery or stirring sticks. The United Kingdom plans to ban such plastics next year, and the European Parliament passed its own single-use plastic ban back in March. There is growing concern about the amount of plastic that's ending up in the world's oceans, with an estimated 1 million birds and more than 100,000 sea mammals worldwide injured or killed when they mistake plastic for food.

Big Papi is back in Boston. The Red Sox sent a plane to the Dominican Republic to get the legendary slugger after he was shot in the back Sunday night at a nightclub. Ortiz had emergency surgery in the Dominican Republic. The bullet went through his stomach, a police spokesman said, and he had to have parts of his intestines and gall bladder removed. Ortiz's condition is serious, but he was stable enough to be flown. He was taken to Massachusetts General Hospital. A doctor who assisted in Ortiz's surgery hopes his recovery will be "the shortest possible." Ortiz, who was honored at Fenway Park before the Red Sox's game last night, is beloved in Boston for more than baseball.

Battle of the bands

Forget Raptors vs. Warriors. The real action at the NBA Finals is the battle of the National Anthems between the US and Canada.

Free SAT prep. Help with college tuition. Walmart is pulling out all the stops to recruit high school students to work for them.

Justin Bieber challenged Tom Cruise to a fight, and, well, we just don't know what to think about it.

The match was a draw, but Argentina doesn't care because the country's soccer team scored its first point -- ever -- at the Women's World Cup.

YouTuber Peter Sark to Keanu Reeves, after the actor popped up at the Electronic Entertainment Expo, known as E3, in Los Angeles

The number of travelers hit in a data breach of US Customs and Border Protection. Images of people and license plates collected by CBP were stolen in a cyberattack

Vodka made from sheep's whey? Apparently, it's a thing in Tasmania. (Click to view.)

Brazil police on the look-out for theft suspect

Sheriff: Man stirs the pot by lighting joint in court

'You put him on a task to do something...he's like a bulldog and he gets it done' Norm Loudermilk named new director of Vigo County Juvenile Center

As the Coronavirus impacts millions in China, local doctors say we should be worried about influenza here