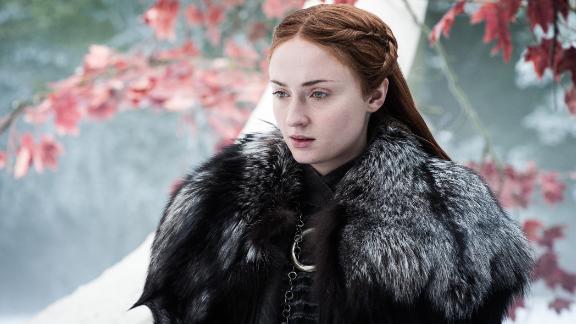 On "Game of Thrones," Sansa Stark has gone from naive girl to clear-eyed leader. See what she overcame to get there.

Two major hits, 'Game of Thrones' and 'The Big Bang Theory,' are signing off within days of each other. Whether those shared viewing experiences represent a celebration or a wake is once again the subject of debate in TV industry circles.

When it comes to bringing millions of people together, TV executives are fond of saying that the pipes still work. That's certainly been true during the build-up to the 'Thrones' finale -- which has broken records for the pay-TV network -- and the CBS comedy, which concluded its 12-year run on Thursday with an estimated 18 same-day viewers, per Nielsen data, a figure expected to grow to 25 million with delayed viewing.

HBO's mythical drama soared to an all-time high with its penultimate episode -- with 18.4 million viewers in the US -- and despite ample criticism and venting on Twitter, seems likely to eclipse that mark with Sunday's finale.

The lingering question is whether in an age of watch-it-your-way viewing these sorts of shows can be replicated, or if each successive generation of 'hits' will inevitably be narrower and more siloed off than the one that preceded it.

This discussion is hardly a new one. Each time a major hit goes off the air -- 'The Cosby Show' in 1992, 'Seinfeld' in 1998, 'Friends' in 2004, 'The Sopranos' in 2007 -- there seems to be a new round of speculation regarding whether TV has crossed a bridge into what amounts to a smaller, more dispersed world.

When 'Seinfeld' ended, the late Larry Gelbart -- who developed 'M*A*S*H,' still the most-watched series finale ever -- cited the value in people being able to share something as relatively benign as a TV comedy, in language that seems even truer now than it did then.

'Anything that brings us together -- God knows there are enough things that keep us apart -- is good for the family that we are as a nation,' he told the Los Angeles Times.

Still, there's no denying that those sort of communal viewing experiences are increasingly rare, with the Super Bowl about the only annual event that has bucked serious erosion. Award shows, notably, are among the events that have witnessed precipitous declines.

Thursday's 'Big Bang,' moreover, isn't nearly as big as past sitcom giants. By way of comparison, the aforementioned 'Seinfeld' finale attracted an estimated 76 million viewers, while 'Friends,' 15 years ago, delivered more than 52 million.

As studios and networks ramp up to launch their own streaming services, the entertainment industry seems to be veering even more into a world of a la carte media consumption. What that means for linear television -- that is, viewing on networks like CBS and HBO -- is very much an open question.

In a recent interview, Chuck Lorre, 'The Big Bang Theory's' producer and co-creator, said it would be 'foolish' to pronounce the sitcom dead, having heard and witnessed such pronouncements and hand-wringing in the past.

The eagerness of studios to create streaming content suggests there's a business model for niche-oriented programming. Even so, the twin loss of these series, as different as they are, does augur fewer 'Big Bangs,' and when it comes to using the term 'hit,' a dwindling number of shows with a legitimate claim to that ratings throne.

'The Big Bang Theory' is produced by Warner Bros., which, like HBO and CNN, is a unit of WarnerMedia.