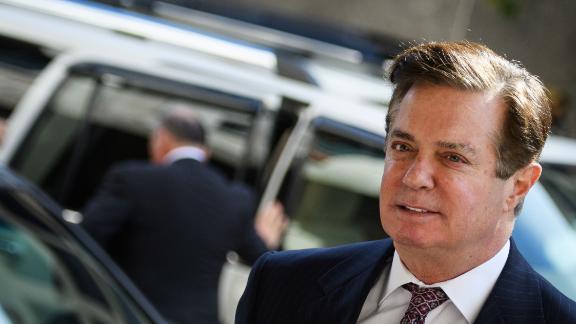 CNN legal analyst Jeffrey Toobin describes Paul Manafort's physical deterioration since prison, saying regardless of politics "there should be an element of humanity here."

Ready to feel protected? You're in luck. Today starts National Consumer Protection Week, which wants to help you understand your consumer rights and make better decisions about your money.

Here's what you need to know to Start Your Week Smart.

(You can also get "5 Things You Need to Know Today" delivered to your inbox daily. You give us five minutes, and we give you five things you must know for your weekday, plus a Sunday edition to get your week started smart. Sign up here.)

• Power play. Catch the premiere episode of the CNN Original Series, "The Bush Years: Family, Duty, Power." Relatives and friends share the inside story of how one family put two Presidents in the White House. Watch it at 9 p.m. ET/PT on CNN.

• Another partisan gerrymandering case goes to court. Ohio is the latest battleground in the fight over whether state lawmakers violated the US Constitution by drawing voting districts to benefit a political party. A federal trial is set to start in Cincinnati. Similar cases have unfolded in Texas, Pennsylvania, Wisconsin, North Carolina and Maryland.

• As trumpeter Kermit Ruffins will tell you, it's "Mardi Gras Day." My family and I will be at the big parade in New Orleans. (Click to join us in spirit.)

• Ash Wednesday marks the start of Lent. Many Christians place ashes on their foreheads to symbolize mortality and repentance as they begin the 6½-week season of fasting and charity that culminates with Easter.

• Chinese exec is back in court. Huawei's chief financial officer, seen by many as a pawn in the US-China trade battle, is back in court in Canada. US prosecutors allege Meng Wanzhou and her company worked to skirt US sanctions on Iran. Her case is playing out as President Donald Trump stalled a US tariff hike on Chinese goods, saying he wants to host Chinese President Xi Jinping and finalize a trade deal.

• Paul Manafort faces his first sentencing. Trump's ex-campaign chairman is due to learn his punishment for bank and tax fraud. Special counsel Robert Mueller wants a federal judge to send Manafort, 69, to prison for up to 24 years and fine him up to $24 million. Manafort's sentencing in a separate case is set for five days later.

• Harvey Weinstein heads back to court. The disgraced movie mogul is also expected in a courtroom for a hearing before his trial on five felony charges, including predatory sexual assault and rape. He has pleaded not guilty to all charges. The hearing for Weinstein, whose case sparked a movement to combat workplace sexual misconduct, falls on International Women's Day.

• South by Southwest begins in Austin, Texas. The 10-day festival celebrates "the convergence of the interactive, film, and music industries." Click here to browse all SXSW events, including music shows at clubs across the city.

• Wake up. Looking forward to sleeping in? A new study says that may not be such a good idea. It could be bad for your waistline -- and your health.