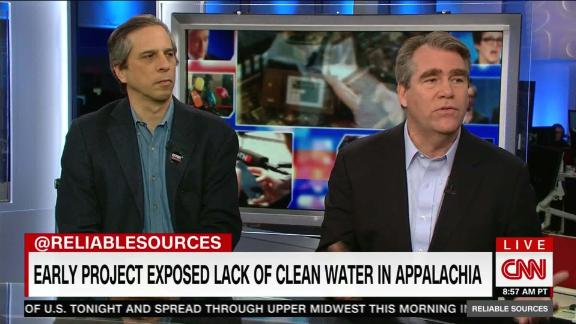 Local journalism is "a binding agent for our democracy," Charles Sennott says. So Sennott and Steven Waldman are leading "Report for America," an AmeriCorps-like effort to help revive local newsrooms. They discuss the role of philanthropy in journalism with Brian Stelter.

A version of this article first appeared in the "Reliable Sources" newsletter. You can sign up for free right here.

"Netflix has morphed into a full-blown Oscars force," THR's Pamela McClintock wrote. "The streamer scored 15 Academy Award nominations Tuesday," 10 of them for Alfonso Cuaron's "Roma," which is up for best picture. "The 15 noms Netflix amassed this year equal the 15 nods total it has collected in previous years," McClintock noted.

Fox Searchlight also scored 15 nominations... Disney and Universal(including Focus) landed 17 each... But Netflix was the standout.

"With its nominations," CNN's Sandra Gonzalez wrote, "'Roma' has tied the record held by 'Crouching Tiger, Hidden Dragon' for the most nominations received by a foreign language film." Keep reading for full Oscars coverage...

Netflix is the newest member of the Motion Picture Association of America, a development first reported by Politico on Tuesday. It is "the first tech company to join the Hollywood trade group" that includes all the big studios, Deadline noted. Will Amazon join next?

Claire Atkinson broke the news with a tweet on Tuesday: Viacom is acquiring Pluto TV. It's an ad-supported streaming service that comes preloaded on lots of smart TV sets.

Pluto is "the latest digital technology company that Viacom has acquired over the past year," after AwesomenessTV and VidCon and Whosay, Axios' Sara Fischer wrote Tuesday evening. She says more acquisitions "are expected..."

Another record-breaking year for the games biz

"American gamers helped fuel a record-breaking $43.4 billion in revenue for the U.S. video game industry in 2018," Variety's Emily Gera wrote Tuesday, citing data from a market research firm and the gaming world's trade association. This is an 18% uptick from 2017.

The Economist's version of "The Daily"

The Economist is preparing to launch its first daily podcast -- titled "The Intelligence." This trailer describes it as a "new current-affairs podcast, published every weekday by Economist Radio, that provides a unique perspective on the events shaping your world." As far as I can tell, it's the first daily podcast produced by the magazine...

FOR THE RECORD, PART ONE

-- Russell Baker, who wrote decades of prize-winning newspaper columns, authored 15 books, and hosted "Masterpiece Theater," has died. He was 93. (NYT)

-- Bret Baier returned to "Special Report" on Tuesday night after a terrifying car accident in Montana over the weekend. Watch his emotional description of what happened... (Twitter)

-- The Alfred I. duPont-Columbia Awards were handed out at Columbia U. on Tuesday night. Here are the winners. CNN and WNYC each took home two awards... It's especially notable to see a local news outfit like WNYC winning twice in one year... (Columbia)

-- For the first time in a decade, the duPont judges awarded a "gold baton," to the PBS newsmag "FRONTLINE..." (PBS)

Headline of the day

That was Politico's news-making headline on Tuesday night... The story said Trump has been enraged by Rudy Giuliani's "walk-backs" and reversals... Although many observers have posited that Rudy has been doing this intentionally...

NYT's Maggie Haberman tweeted out the story and said "Trump is definitely frustrated with Giuliani but Giuliani isn't going anywhere. Overall Trump likes what he does."

Here is CNN's latest reporting on the subject: "A member of the Trump legal team tells Evan Perez tonight 'Rudy's not getting fired.'" And according to Jeff Zeleny, a source who spoke with Trump on Tuesday "said Trump likes the obfuscation of it all, and doesn't detect any sense of firing..."

ABC News reported on Monday: "White House sets record for longest span with no press briefings during the Trump presidency." This record spurred some criticism on Tuesday...

Oliver Darcy emails: It has been more than a month since Sarah Sanders last held a press briefing -- and now, we have an explanation from the President. Trump turned to Twitter Tuesday morning to explain that "the reason" Sanders does not hold briefings anymore is because he feels "the press covers her so rudely & inaccurately." Trump said "certain members of the press" are worse than others and added that he told Sanders "not to bother" since "the word gets out anyway!"

>> Trump's tweet prompted a response from WHCA president Olivier Knox, who said in a statement that the Trump admin's move "sets a terrible precedent..."

Darcy emails: CNN's Kaitlan Collins and Kevin Liptak published a must-read on Tuesday about the White House comms team. Their story said a prolonged power struggle has led to a muddled messaging strategy during the shutdown, which has resulted in West Wing staffers deeming the dysfunctional press shop to be "irrelevant."

According to Collins and Liptak, there is no clear leader among Sanders, Bill Shine, Kellyanne Conway or Mercedes Schlapp -- though Collins and Liptak reported that Trump has developed a warm relationship with Sanders and offers her praise in private...

What is Bill Shine doing?

Darcy sends one more: Since Shine accepted a position in the Trump W.H., it has been unclear exactly what impact or role he has had. Collins and Liptak reported that some officials have been disappointed by his approach. "So far, Shine's contribution has largely consisted of phoning Fox News hosts and booking officials on the shows so they can defend the President on a network whose audience largely already favors him," Collins and Liptak wrote...

If you were POTUS...

I ask because Trump spent a lot of time doing that on Tuesday. It's not new at this point, but it's still odd. As WaPo's Philip Bump tweeted in the A.M., "Two years in, it's still remarkable that the president of the United States starts most days by hyping things he's watching on a morning cable news show."

Trump resumed his Fox-watching in the evening, leading former Obama aide Dan Pfeiffer to tweet: "The President can have dinner with anyone in the world, can go anywhere, can get anyone on the phone, has access to movies before they come out and instead sits alone in his bathrobe every night and live tweets Tucker Carlson while begging for praise."

FOR THE RECORD, PART TWO

-- About Cliff Sims' book: The author of "Team of Vipers" (I can't believe I called it "Team of Rivals" last night!) will be on "GMA" next Monday, followed by "Nightline" and "The View..." It's an ABC rollout...

-- CNN's Fareed Zakaria (the man I'm very lucky to count as my "lead-in" on Sunday mornings!) made Foreign Policy's annual list of the top 100 Global Thinkers, AND the mag's Top Ten of the Last 10 Years... (FP)

-- CBS "does not currently accept any cannabis-related advertising," so it apparently turned down this wannabe Super Bowl advertiser... (CNN)

-- "A bankruptcy court judge on Tuesday confirmed iHeartMedia Inc.'s restructuring plan that allows the company to slash its debt load and hand over control to a group of bondholders..." (WSJ)