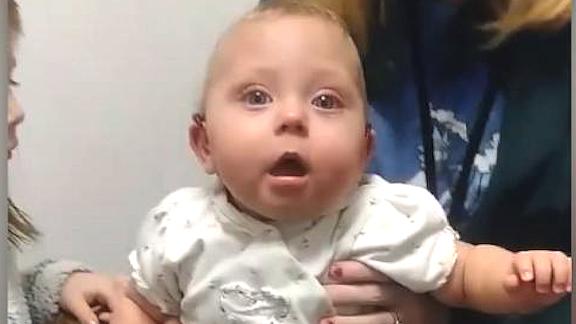 See the moment a baby hears for the first time after being fitted for a hearing aid.

Better savor every sip. Scientists say the world's most popular coffee species are going extinct. And it's all our fault. Here's what else you need to know to Get Up to Speed and Out the Door. (You can also get "5 Things You Need to Know Today" delivered to your inbox daily. Sign up here.)

Nancy Pelosi really ramped up the pressure in the government shutdown. The House speaker sent a letter to President Trump, saying he should either move the date of the State of Union address (scheduled for January 29) or deliver it in writing because of security concerns related to the shutdown, now 27 days old. (Remember it's the House speaker who invites the President to deliver the speech to Congress.) So, basically, Pelosi told Trump that if he wants to give his speech, he'll need to end the shutdown first. The GOP blasted Pelosi for this unexpected move, with House Minority Leader Kevin McCarthy calling it "unbecoming" of a House speaker. It's not clear yet just what the White House will do.

The debate over the Trump administration's decision to pull US troops out of Syria has reignited after the deaths of four Americans in a suicide attack. Two US service members, a defense contractor and a Defense Department civilian were killed in an explosion in the Syrian city of Manbij. ISIS claimed responsibility for the attack. Both GOP and Democratic lawmakers renewed their appeals to the President for troops to stay in Syria until ISIS is definitely defeated. But the White House said the attack won't reverse Trump's decision. There are about 2,000 US troops in Syria.

The death toll rose to 21 in that terror attack at a hotel complex in an upscale section of Nairobi, Kenya. At least 30 others were hospitalized in the coordinated attack, in which an unknown number of gunmen set off bombs, barged into a hotel and started firing. Fifty people were still unaccounted for yesterday after the siege that lasted for hours. Authorities said all the attackers, suspected to be from the terror group al-Shabaab, were "eliminated." Among the dead was American businessman Jason Spindler, who had survived the 9/11 terror attacks in New York.

Theresa May survived a no-confidence vote a day after her Brexit deal crashed and burned in Parliament. Now, the British Prime Minister has until Monday to come up with a new Brexit plan that can please UK lawmakers and EU leaders. It won't be easy. She'll have to bring together political parties with competing objectives to get behind whatever alternative she comes up with. And even if she does, there's no guarantee the EU would even be willing to reopen Brexit negotiations. All this political wrangling has to happen fast because the March 29 deadline for the UK to get out of the EU is quickly approaching.

Last year was the hottest year ever for Earth's oceans, a new report says. 2018 was the hottest year since scientists started keeping records about ocean temperatures 60 years ago. The grim news comes from a study in the journal Advances in Atmospheric Sciences. And it points out a disturbing trend: The hottest five years for ocean temps have all occurred since 2014. The report's authors say changing ocean temperatures are the best indicators of climate change. Warmer oceans lead to a variety of problems, such as sea level rise, more intense storms with heavier rainfall, coral bleaching and melting polar ice.

Romeo, the world's loneliest frog, may have finally found his Juliet and, in the process, saved his species.

Trump's "Space Force" is a go -- on Netflix. Steve Carell will star in the "office" comedy about the folks creating this new branch of the armed forces.

Real estate just a little too pricey where you live? Consider a move to Sambuca, Italy, where you can buy a home for just a dollar.

It's the best thing you'll see all day: a baby, hearing for the first time after being fitted for a hearing aid, giggling at the sound of her older sister's voice.

After landing a probe on the far side of the moon, China says it's achieved another lunar first: growing a plant.

Trump lawyer Rudy Giuliani, telling an incredulous Chris Cuomo that Trump didn't collude with Russia but that he couldn't say if other people in Trump's presidential campaign did. Trump and his supporters have repeatedly denied collusion between his campaign and the Russian government.

That's how much money Microsoft is investing to make housing more affordable in its home base of Seattle.

The robots are coming

Man's best friend doesn't need man to relax him. That's what the boxing robots are for. (Click to view.)

The doctor will see you now...in your living room

Look Ahead To April

Local health expert weighs in on elderly and COVID-19 risks