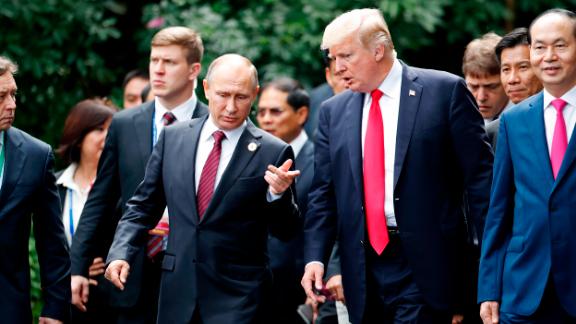 CNN's Brian Todd explores President Donald Trump's relationship with Russia after a New York Times report revealed the FBI previously opened an inquiry into whether or not the president was benefitting Russia in some way.

'This is conspiracy that has no relation to reality,' Kremlin spokesman Dmitry Peskov told the tabloid Argumenty i Fakty. 'America has found itself in a situation unique to itself: There is a division both in society and in the government, and the result is the difficult conditions in which Trump has to work.'

In the interview, published Tuesday, Peskov was asked about whether there was 'some kind of conspiracy' between the two leaders, following a series of bombshell reports highlighting Trump's dealings with Russia and its leader.

Peskov went on to note that US threats of sanctions against Moscow were serious, and no political game: 'Sanctions are not trifles, but a very serious thing. Here, for example, we are threatened with restrictions in connection with the implementation of the Nord Stream 2 project.'

Plans for Nord Stream 2, a new gas pipeline that would bypass Ukraine, have been in the works for years, but Europe is deeply divided over the project.

'This is an overt attempt to provide a competitive advantage for American liquefied (natural) gas, which is more expensive than Russian. And to force Europeans to buy it,' Peskov added.

Peskov's comments come as speculation about the US President's relationship with Russia continue to swirl.

On Friday, the New York Times reported that the FBI opened an investigation into whether Trump had acted for Russia against US interests. Then, on Sunday, the Washington Post reported that Trump sought to keep secret the details of his meetings with Putin.

Trump angrily dismissed ever working for Moscow on Monday, speaking from the White House South Lawn.

'I never worked for Russia, and you know that answer better than anybody,' Trump said, calling the entire investigation into possible collusion between his campaign and Moscow 'a whole big fat hoax.'