Scripted Trump does little to convince skeptics on border wall 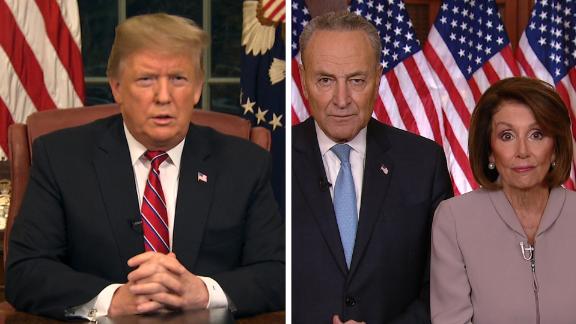 In his first formal address to the nation from the Oval Office, President Donald Trump painted a picture of a national threat and humanitarian crisis occurring along the US-Mexico border. Democrats immediately responded. Here's how their speeches differed.

President Donald Trump delivered his scripted response to the deepening Washington stalemate over his border wall on Tuesday night. But when he's free to tweet and with cameras rolling during a Wednesday morning appearance, America could find out what he really thinks.

Penned in by the formal stagecraft of his first Oval Office address, the President did little to pry open the partially shuttered government or bring the ultimate monument to his political movement -- a wall along the southern border -- any closer to construction.

But Trump's behavior in the wake of a big set piece moment is often dictated by his reaction to how everybody else scores his performance.

His impulsive political instincts can go into overdrive after appearances in which he put on a calm presidential demeanor, for instance, in his State of the Union address last year. A subsequent torrent of tweet storms or off-the-cuff remarks to reporters often give a more authentic glimpse into the President's mind.

So, Trump's Twitter feed and a photo op as he signs anti-human trafficking legislation at the White House Wednesday could make compelling viewing -- especially if the President is in a sour mood over morning television coverage of his big speech.

The President hinted that Tuesday night's Oval Office show, his most aggressive move yet in a government shutdown now into its third week, was out of his normal comfort zone of rallies and spontaneous appearances.

'Thank you for soooo many nice comments regarding my Oval Office speech. A very interesting experience!' he tweeted just before midnight.

Trump had four urgent goals heading into the prime-time address on Tuesday that summoned the symbolic might of the presidency and was beamed into millions of homes and onto mobile devices.

He had to convince those Americans who are prone not to trust him that there is a genuine crisis at the border. He had to prove the wall is the way to address it. And he had to bolster a weak personal position and change the political equation as the shutdown begins to bite.

Finally, with signs of cracks appearing in Republican ranks on Capitol Hill, the President had to produce a tour-de-force that would stiffen his own party's resolve and ease pressure on wavering lawmakers from angry constituents.

'This is a choice between right and wrong, justice and injustice. This is about whether we fulfill our sacred duty to the American citizens we serve,' Trump said, seeking to elevate the dispute above the narrow focus on a border wall -- a state of affairs that he has done more than anyone to foster.

But at the end of the night it seemed possible that the emotional, symbolic aspiration of building a wall that did so much to inflame Trump's political career will become an increasing drag on an administration beset by political challenges.

One thing Trump did not do was show any sign of caving to Democrats who are refusing his demands for more than $5 billion in wall funding -- though the formality of the setting drained much of the trademark fire and passion from his delivery.

There was also no game changing moment that could help Trump deliver a desperately needed win, at a time of extreme peril exacerbated by threatening new developments in Robert Mueller's probe on Tuesday.

Trump's speech lacked the emotional impact of many previous presidential orations from the Oval Office desk -- or new material that could unpick the Washington deadlock.

'The speech had a hurried quality to it. It was thrown together. It didn't move you, it didn't move the audience, I think, emotionally or rationally,' said David Gergen, an adviser to Republican and Democratic presidents, on 'CNN Tonight.'

Texas Republican Rep. Will Hurd, who represents a vast Texas border district told CNN's Don Lemon: 'Tonight we didn't see anything new that we haven't already seen. Unfortunately, I don't think any side put forward any initiatives that are going to move the ball forward.'

If the President wanted to coax the Democrats to the negotiating table, he offered them little new cover to engage or incentive to bargain. He also failed to land a killer blow that could erode what they feel is their strong position.

Part of the problem was the dynamic Trump faced going into the speech. The President accused Democrats of keeping the government shut because they will not finance border security.

But that is not true, since House Democrats have already passed a measure that provides $1.3 billion for border security through February 8 but no wall funding. The measure was modeled on a Republican bill that passed the Senate last year.

Before Christmas, Trump said he would be 'proud' to shut down the government over border security, a remark that undercuts the version of events he laid in his Oval Office address.

In their response Tuesday, House Speaker Nancy Pelosi and Chuck Schumer put on an exaggerated show of calm meant to show they -- and not Trump -- offer responsible government.

'President Trump must stop holding the American people hostage, must stop manufacturing a crisis and must reopen the government,' Pelosi said.

The President's warning that America was facing 'a crisis of the heart and a crisis of the soul' represented a change of tone, as he opened his remarks by bemoaning a 'humanitarian and security crisis at our southern border.'

That appeared to be an effort to take some heat out of the debate to appeal to more moderate voters. The President didn't mention the wall -- the issue at the center of the shutdown -- until late in his address.

Still, his dark portrait of out-of-control border crossings, a torrent of drug trafficking from Mexico and of assaults, sex crimes and killings perpetrated by 'aliens' will have won approval from his most loyal supporters.

Trump's base rallied to his warnings of a border crisis in his campaign, and still sincerely believes the situation is out of control.

But for anyone not already in his camp, Trump is an imperfect messenger since he has long demagogued immigration for political gain. His speech was sprinkled with falsehoods. For instance, he falsely implied that most heroin trafficking comes over the porous southern border and a wall would fix the problem. In fact, most of the drug is seized at legal points of entry -- a wall may do little to solve that situation.

The President also sought to wiggle out of his famous promise that Mexico would pay for the wall by arguing that the cost would be recouped in a new trade deal, willfully misinterpreting how such agreements work.

Trump's depiction of undocumented migrants as crazed criminals, when many are desperate asylum seekers fleeing persecution and economic deprivation, was meanwhile deeply offensive to Trump's opponents.

The President also ignored the plight of hundreds of thousands of government workers who have been without a paycheck since he reversed course on a short term funding deal before Christmas fearing a backlash from conservative pundits and his political base if he failed to secure wall funding.

And there were signs on Tuesday night that Republican anxiety about the political impact of the shutdown is growing -- a fact that the President's lack of empathy for locked out workers will have done little to alleviate.

Alaska Sen. Lisa Murkowski, a moderate Republican who has bucked the President before, said she was receptive to a process that would reopen the government even if the fight over the wall is not resolved.

'I think we can walk and chew gum,' she said.

A fight Trump needs to have

Trump's first public appearance Wednesday is a signing ceremony for anti-human trafficking legislation, which could result in some extemporaneous remarks if he chooses to respond to a morning of potentially critical news coverage. The President will then head to Capitol Hill to rally Republicans and then meet congressional leaders in the White House Situation Room -- a venue chosen to suggest a moment of crisis.

The President's next big set piece event is a journey to the border on Thursday.

If that fails to move the political needle, Trump may be tempted to follow through on his threat to declare a national emergency as a way to redirect Pentagon funding from other projects to wall construction.

CNN's Jim Acosta reported on Tuesday that some of Trump's friends have told him that such a move would likely not work out legally for the President.

But it could offer Trump a way out of his dead end over the wall in one way. A court battle over the order would position Trump as waging a fight that would be popular with his base, as his re-election bid gets under way.

An adverse judgment could offer an opening for a face saving flaying of the justice system and the perceived unfairness of the political establishment, who Trump has long blamed for seeking to thwart his presidency.