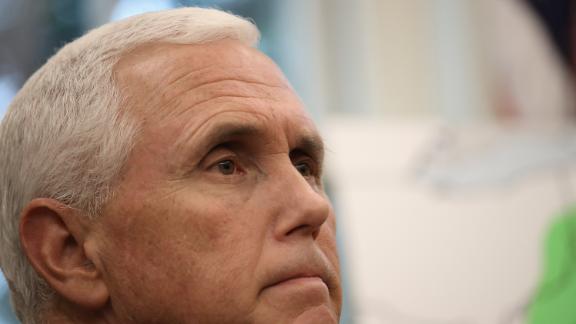 Vice President Mike Pence misleadingly claimed that nearly 4,000 "known or suspected terrorists" were caught trying to enter the US as he made the Trump administration's push for a southern border wall.

Vice President Mike Pence on Tuesday misleadingly claimed that nearly 4,000 'known or suspected terrorists' were caught trying to enter the US as he made the Trump administration's push for a southern border wall.

'Nearly 4,000 known or suspected terrorists were apprehended attempting to come into the United States through various means in the last year,' Pence said on ABC's 'Good Morning America.'

That number, however, is deeply misleading as justification for a wall on the southern border.

According to a senior administration official familiar with Customs and Border Protection data, just 12 of those were encountered on the southern border between October 2017 and October 2018.

That data concerns individuals attempting to travel to the US by air, sea or land, and includes those who made efforts to obtain visas from embassies and consulates around the world. In July 2017, the State Department said there was 'no credible information that any member of a terrorist group has traveled through Mexico to gain access to the United States.' The vast majority of those 4,000 individuals attempted to enter by air.

'Overwhelmingly at airports, not at the border,' ABC's Jon Karl told Pence Tuesday.

'Yeah, but 3,000 special interest individuals, people with suspicious backgrounds that may suggest terrorist connections were apprehended at our southern border,' Pence replied. A 2016 DHS Office of Inspector General report defined special interest countries as those 'that are of concern to the national security of the United States, based on several U.S. Government reports.'

The figure floated by Pence is separate from the 3,755 individuals the Department of Homeland Security has cited as 'known or suspected terrorists' and requires some context.

Juliette Kayyem, a DHS assistant secretary in the Obama administration and a CNN national security analyst, has said there are more special interest countries than the State Department's list of officially designated states that 'promote or have a tendency to promote terrorism.' The White House also said last year that Customs and Border Protection enforcement actions had been carried out against individuals from 22 ''Special Interest Aliens' countries.' There's no uniform definition of the term 'special interest alien,' but former Homeland Security Secretary John Kelly defined 'special interest' as being 'from parts of the world where terrorism is prevalent, or nations that are hostile to the United States.'

Customs and Border Protection data counts nearly 17,000 criminal aliens 'encountered' by the Office of Field Operations and the Border Patrol in fiscal year 2018. But it should be noted that large portions of the immigrants being arrested at the southern border committed nonviolent crimes, like illegal entry or re-entry -- the act of crossing into the US illegally -- and driving under the influence of alcohol. Customs and Border Protection statistics also measure immigrants convicted of crimes in the US or abroad.

Pence also told ABC's Karl that '90% of all the heroin that comes into this country that claims the lives of 300 Americans every week comes through our southern border.'

According to the latest Drug Enforcement Administration threat assessment report, the majority of heroin that enters the US does come through Mexico, but via legal ports of entry.

President Donald Trump is scheduled to address the nation Tuesday night to discuss what the administration has called a 'crisis' at the southern border. The government has partially shut down over a budget impasse between Democrats and Republicans over whether to fund Trump's demand for a border wall.

CORRECTION: This story has been updated to correct a reference to the Drug Enforcement Administration.