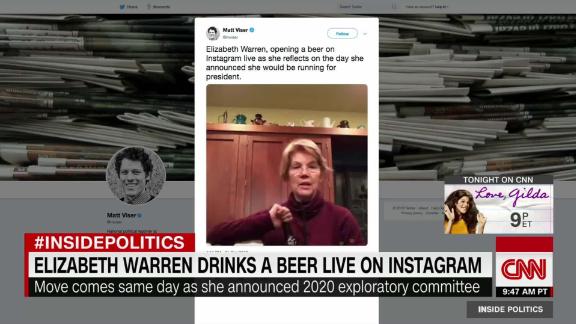 Sen. Elizabeth Warren drinks a beer, and incoming GOP Rep. Dan Crenshaw throws around axes and New Year's resolutions. Politicians are streaming from their kitchens and homes on Instagram, Twitter and Snapchat to reach voters directly.

Newly elected members have been sharing their experiences on social media in a way we've never seen before.

There was Alexandria Ocasio-Cortez using her Instagram stories to take people behind the scenes of the traditionally closed-door new-member orientation process, from office selection to learning the byzantine House tunnel complex, and using Instagram Lives to talk politics and take questions while making Instant Pot macaroni and cheese.

There were fellow progressive newcomers, like Ilhan Omar and Rashida Tlaib, never hesitating to use Twitter to fire back at critics (or traditional House floor rules) in a clear effort to announce the arrival of a new generation of politicos.

There was incoming GOP Rep. Dan Crenshaw tweeting his New Year's resolutions (including No. 5: get better at double ax throwing, with a video of said subpar double ax throw included, of course).

As new elected members get used to Washington -- hiring their staffs, figuring out their office budgets and figuring out which apartments to rent -- they'll also be faced with trying to navigate a new political landscape on both sides of the aisle.

For Republicans, most have aligned themselves with Trump.

Voices on the other side of the aisle are less united.

Progressive firebrands like Ocasio-Cortez, who promised to mobilize the resistance, have been elected to the same party as conservative and moderate Democrats who won in districts that went for Trump in 2016 -- and they want to keep those seats in 2020.

On one side, progressives ran on promises of impeaching Trump, abolishing Immigration and Customs Enforcement, raising the minimum wage and "Medicare-for-all."

Moderates, on the other hand, promised to prioritize small businesses, tweak the existing health care system, and work with Republicans and Trump when they can.

As the 2020 presidential election nears, and Democrats try to decide what kind of candidate they want to run, don't expect these new voices to stay quiet.