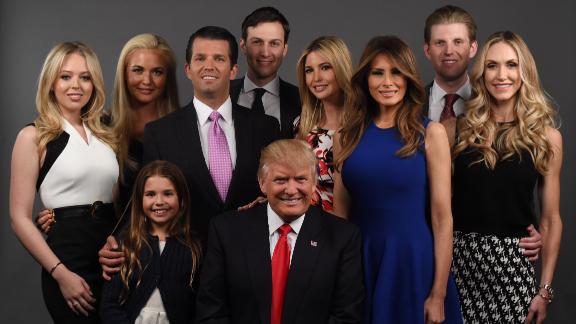 New Year's Eve is a little more than two weeks away. If you don't have plans yet, here are 10 great places to ring in the New Year. Or you could celebrate at home with Anderson Cooper and Andy Cohen. Here's what else you need to know to Get Up to Speed and Out the Door. (You can also get "5 Things You Need to Know Today" delivered to your inbox daily. Sign up here.)

Donald Trump was in the room during an August 2015 meeting at which federal prosecutors believe a criminal scheme to violate campaign finance laws to help Trump win the presidency was discussed, a source says. Trump, his ex-fixer, Michael Cohen, and David Pecker, chairman of the parent company of the National Enquirer, talked about a plan to shield Trump from potentially damaging stories and pay hush money to women who claimed they'd had affairs with him. Prosecutors say this amounted to illegal donations to his 2016 campaign. The Wall Street Journal first wrote about this last month, and it just popped up again, as the feds announced they weren't charging Pecker's company for campaign finance violations in exchange for its cooperation.

But that wasn't the day's only bad news for Trump. Federal prosecutors are also investigating his 2017 inaugural committee for possible financial abuses connected to more than $100 million in donations raised for the event, a source says. Prosecutors want to know whether the committee took donations from people looking to gain access or influence with the new administration. The committee said the event was in "full compliance" with the law.

Who sent all those email bomb threats yesterday? Authorities in the US, Canada, Australia and New Zealand are working to find out. The threats -- sent to schools, businesses, courthouses and media organizations -- caused evacuations, business disruptions and a whole lot of anxiety, but there was no reported violence. The (poorly worded) emails told recipients there was a hidden bomb in the building that would explode unless the sender got a ransom in Bitcoins. In the last three months, colleges, law enforcement agencies, gun stores and municipal offices in more than a dozen states have received emailed threats that were later deemed to be hoaxes.

In a rebuke to President Trump, the Senate passed a resolution condemning Saudi Arabia's Crown Prince for the murder of journalist Jamal Khashoggi. Trump has refused to condemn Crown Prince Mohammed bin Salman in Khashoggi's death. The Senate also passed a resolution to end US military support for the Saudi-led war in Yemen, which has pushed millions of civilians to the brink of starvation. But the resolutions may not go anywhere in the House, where Republicans leaders may ultimately side with the President.

The suspect in the Strasbourg Christmas market shooting is dead. Cherif Chekatt, 29, was shot by police on a street not far from the market. Police recognized him as he walked down the street, so they approached him. He opened fire, and they fired back. In the attack this week on the Christmas market, three people were killed and 13 others hurt. Five people are in custody in the investigation so far.

Gun deaths in the US reached a record high last year. Almost 40,000 people died in gun violence in 2017, according to data analyzed by the CDC. That's the most gun-related deaths in almost 40 years (dating back to 1979, the year firearm deaths started to be tracked). The director of the Educational Fund to Stop Gun Violence called it "a public health epidemic" and advocated for stiffer gun laws, but the NRA tweeted out its long-standing position that "gun control laws are not the answer."

Nancy Wilson, the three-time Grammy-winning singer known for her jazz ballads and torch songs, has died. She was 81.

Out of this world

South Africa will launch the continent's first private satellite -- designed by a group of teen girls -- into space in March.

Facebook tried to put its most scandalous year behind it by handing out free hot chocolate -- and security tips.

The real spirit of Christmas

This Santa Claus crawled on the floor of a sporting goods store, all to help a blind boy with autism feel more comfortable.

School kids in Lordstown, Ohio, wrote to GM, trying to save their town's auto plant. Read the heartbreaking letters here.

Gayle King flirted like crazy with Lenny Kravitz on a talk show, and social media was (mostly) all for it.

That's how much hitmakers Pharrell Williams and Robin Thicke must pay Marvin Gaye's family in the copyright lawsuit over the song, "Blurred Lines."

No, it's not how fast you can save on car insurance but how fast you'll be able to recharge the electric cars of the future.

"We just found a stream in the mine, just started drinking and hoping and praying to God that it was not contaminated."

Cody Beverly, one of three people rescued after being trapped for days in an abandoned mine in West Virginia. The trio is suspected of entering the mine to steal copper and could face charges.

The "Fearless Girl" statue has been moved to a new home in New York City. Where is she now?

Play "Total Recall: The CNN news quiz" to see if you're right. And don't forget, you can also find a version of the quiz on your Amazon devices! Just say, "Alexa, ask CNN for a quiz."

IT'S THE WEEKEND, BABY

Lots of big movies come out today. You can swing into the dazzling but goofy "Spider-Man: Into the Spider-Verse," dive into the sea with "Aquaman" or dance along with Emily Blunt in "Mary Poppins Returns."

Wield a sword or master the art of archery on horseback at one of the oldest samurai schools in the world. (Click to view.)