Theresa May to face no-confidence vote amid Brexit chaos 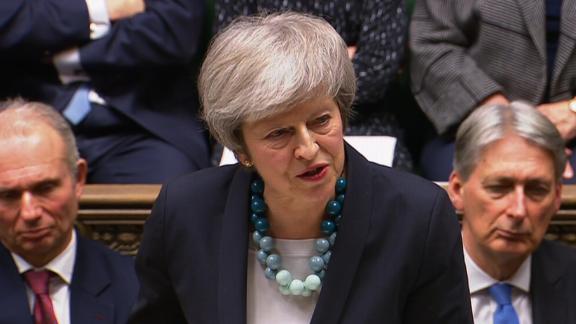 Members of UK Prime Minster Theresa May's own party triggered a vote of no-confidence in her leadership amid Brexit deal discussions, which could lead to her removal from office.

Theresa May's Brexit crisis deepened Wednesday as members of her own party triggered a vote of no-confidence in her leadership.

If she loses the vote, which will take place on Wednesday evening, she will be out as British Prime Minister.

The starting gun was fired after 48 Conservative Members of Parliament submitted letters demanding a vote to the 1922 Committee, which represents rank-and-file Conservative MPs in the House of Commons.

Appearing on the steps of Downing Street, May later vowed to fight the contest with "everything I've got."

Graham Brady, the MP who chairs the committee, confirmed that the threshold for a confidence vote -- equivalent to 15% of backbenchers -- had been passed.

In a statement, Brady confirmed that the result of the vote would be made as soon as possible with ballots being counted immediately.

Speaking on BBC Radio 4's Today Programme, Brady said that May was made aware of the leadership contest on Tuesday night.

He refused to say how she had reacted, other than to say that she was eager for the process to be completed as quickly as possible. Brady said he wanted the announcement of the challenge made before markets opened.

The vote could hardly have have come at a worse time for May, who has been criss-crossing Europe to beg EU leaders for help passing her Brexit deal through the UK Parliament.

May was forced to postpone a vote on the deal on Monday when it became clear she was likely to go down to a humiliating defeat.

If May loses the vote, the Conservative Party must hold a leadership election. If she wins, however, party rules mean that she cannot face another vote in a year.

May is facing considerable pressure from the Euroskeptic wing of the party. In a statement published on Wednesday, Jacob Rees Mogg, chairman of the European Research Group and Steve Baker, his deputy, called on her to go.

"Theresa May's plan would bring down the Government if carried forward. But our party will rightly not tolerate it," read the statement carried by the UK Press Association.

"Conservatives must now answer whether they wish to draw ever closer to an election under Mrs May's leadership. In the national interest, she must go."

A number of government ministers came out in support of May just minutes after the vote of no confidence was announced.

"The PM has my full support. At this critical time we need to support and work with the PM to deliver on leaving the EU, & our domestic agenda -- ambitious for improvements to people's lives & to build on growth of wages & jobs," tweeted Amber Rudd, the Work and Pensions Secretary.

Chancellor Philip Hammond also defended May, tweeting that she had "worked hard in the National interest since the day she took office and will have my full support in the vote tonight."

Environment Secretary Michael Gove also offered his support to May on Twitter: "I am backing the Prime Minister 100% - and I urge every Conservative MP to do the same. She is battling hard for our country and no one is better placed to ensure we deliver on the British people's decision to leave the EU."

COVID-19 is bringing back memories of the Spanish Flu

'We are really struggling,' Local shelter seeks help from the community during COVID-19

Playgrounds are shut down at all Terre Haute Parks