GM is reinventing itself. Its cutting 15% of its salaried workers and shutting 5 plants in North America 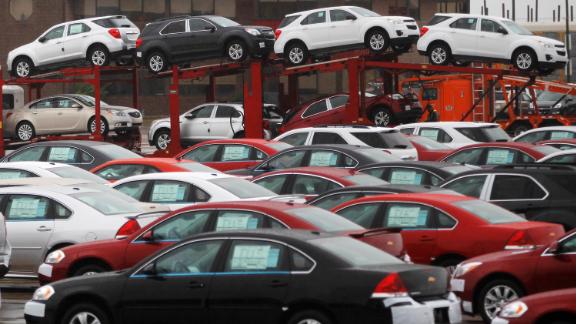 General Motors is shutting production at five facilities in North America and cutting 15% of its salaried workforce.

General Motors on Monday announced a major restructuring of its global business, saying it will shut production at five facilities in North America and slash its staff. GM will reduce its salaried workforce by 15%, including a quarter of the company's executives.

The moves are the first big steps in the century-old GM's transformation. The company is reinvesting money away from cars that once dominated America's roadways and putting it into technology it believes will power its future.

The company said the plan would make it more efficient, saving $6 billion a year by the end of 2020. GM said its slimmed down production plan would allow it to share technology across all of its vehicles and reduce the amount of time and workers it takes to build cars.

"The actions we are taking today continue our transformation to be highly agile, resilient and profitable, while giving us the flexibility to invest in the future," said CEO Mary Barra, in a statement.

GM said it would shut operations at plants in Detroit; Oshawa, Ontario; Warren, Ohio; White Marsh, Maryland; and Warren, Michigan. The plants made sedans that have waned in popularity, including the Chevrolet Volt, Impala and Cruze, the Buick LaCrosse, and the Cadillac CT6 and XTS. Two of the plants made engines and parts for those cars. The facilities made some trucks, but those trucks are also made at in Mexico.

General Motors of the future

The company, which was incorporated in 1908, is battling rival automakers to be first in line to mass-produce the cars of the future. Ford (F) announced in April it would just about end all production of sedans in North America.

But the next automaking leader may not be GM or one of its traditional rivals. Alphabet (GOOGL), Apple (AAPL), Uber and Tesla (TSLA) are leading Silicon Valley's push into the self-driving cars. That's why GM bought Cruise, a separate company with big backing from SoftBank and Honda. GM expects to spend $1 billion on Cruise this year to build the next generation of cars.

In the meantime, GM is trying to reinvent how it makes vehicles. It will share more components across cars and make better use of computer models and virtual tools. It will integrate its vehicle and engine engineering teams, and it will bring more employees together, trimming the number of campuses for car developers.

The Oshawa plant, located just outside of Toronto, was built in 1953. But Chevrolet has been making cars in Oshawa for more than a century. Over the years, Oshawa has been responsible for producing cars from GM's most important brands, including Chevrolet, Buick and Pontiac, and it is equipped to make just about every model GM sells.

Canadian Prime Minister Justin Trudeau said he was "deeply disappointed" by the decision to shut the Oshawa, Ontario plant. "GM workers have been part of the heart and soul of Oshawa for generations - and we'll do everything we can to help the families affected by this news get back on their feet."

GM's unions aren't happy. The union that represents its Canadian workers said in a statement that GM's expected decision does not "live up to the spirit" of certain commitments the company made to union members during 2016 contract negotiations. Some workers at the Oshawa plant walked off the job Monday.

The four American plants employ a combined 3,800 hourly and salaried staff. The Detroit-Hamtramck facility is GM's last in the city, and the Lordstown plant in Ohio was one of its biggest.

The United Autoworkers union said it would fight the decision.

"This callous decision by GM to reduce or cease operations in American plants, while opening or increasing production in Mexico and China plants for sales to American consumers, is, in its implementation, profoundly damaging to our American workforce," said Terry Dittes, UAW Vice President, Director GM Department."