Police find 75 lbs of pot during I-70 traffic stop

It happened near the 35 mile-marker in Putnam County. 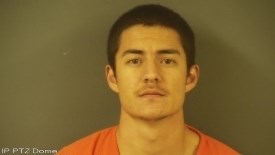 The reason for the traffic stop was speeding.

While speaking with King, police say they found information that led to the search of the car.

That is when they found a large duffle bag with what they believe to be marijuana.

In the trunk of the car, officers say they found three more large duffle bags with packaged marijuana and vials of suspected marijuana oil.

In total, police found about 75 lbs of pot, 300 vials of marijuana oil, and one OxyContin tablet.

Police say King was driving from Colorado to Ohio.

Cade Comes Home: A motorcycle ride to honor local 18-year-old who took his own life

Back in The Woods celebrates new business expansion

Perrysville man arrested for sexual misconduct with a minor