Marjorie Taylor Greene's 'apology' only shows how dangerous she really is 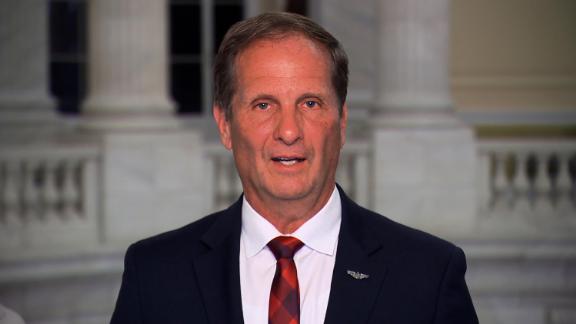 You know there's something deeply wrong with American conservatism when a Republican member of Congress has to go to the US Holocaust Memorial Museum and hold a news conference to admit it's "offensive" to compare Capitol Hill mask-wearing rules to the Holocaust.

But that's what Rep. Marjorie Taylor Greene did on Monday.

For an elected official to say "it happened" and "the Holocaust is -- there's nothing comparable to it" while offering the shallow apology of "I made a mistake" for making such a disgusting comparison tells you just how low the baseline is here. Rhetoric like that is an ugly and dangerous provocation, at once minimizing one of the most horrific crimes against humanity in modern history and maximally villainizing one's fellow citizens not as political opponents in an adversarial system but as wannabe genocidal murderers.

But that's what the GOP has embraced in Greene, a conspiracy theorist, liar and bigot who nonetheless continues to enjoy her party's support.

Given her stunned post-museum-visit posturing, one has to wonder what, exactly, Greene believed happened during the Holocaust before visiting the museum. She also felt a bizarre -- and perhaps telling -- need to emphasize that those murdered in the Holocaust were "not just Jewish people -- Black people, Christians, all kinds of groups." While it's true that "all kinds of groups" were indeed killed by the Nazis, Jews were the primary focus; members of some Christian sects such as Jehovah's Witnesses were targeted by the Nazis, and many Christians were members of other groups singled out or marked for extermination, but Nazis were not interested in exterminating Christians generally. They were unquestionably motivated to exterminate Jews.

Greene's initial comments about the Holocaust were what necessitated this public relations event in the first place. "You know, we can look back at a time in history where people were told to wear a gold star, and they were definitely treated like second-class citizens, so much so that they were put in trains and taken to gas chambers in Nazi Germany," Greene said in May on a right-wing podcast. "And this is exactly the type of abuse that Nancy Pelosi is talking about." She later tweeted, "Vaccinated employees get a vaccination logo just like the Nazis forced Jewish people to wear a gold star." (Jews, it should be said, were not forced to wear gold stars signifying recognition or reward, but yellow stars meant to mark them for ostracization and violence).

And she told rallygoers at an America First event on May 27, "You know, Nazis were the National Socialist Party. Just like the Democrats are now a national socialist party." Tellingly, when asked Monday about this Nazi comparison, Greene did not disavow or apologize for it. She even reinforced her criticism of Democrats: "I'll never stop saying we have to save America and stop socialism." (The Nazis were an authoritarian right-wing nationalist party, and the Democrats are not a socialist party, national or otherwise).

Greene has crossed the line so many times that even a few leaders of her own party finally criticized her comments. But they stopped short of withdrawing their support of her. And while Greene is likely to be the subject of a Democrat-written House resolution that would censure her for her Holocaust remarks, Republican members of the House (and, shamefully, many Democratic ones) are instead focusing their ire on Democratic representative Ilhan Omar for her, in my reading, patently correct (if ineloquently written) tweet about the need to "have the same level of accountability and justice for all victims of crimes against humanity," whether those alleged crimes are perpetrated by Hamas or the Taliban or Israel or the US. Omar's critics claim she's equating the US with terrorist groups, an accusation that falls apart as soon as one watches the video she included with the tweet, which offers her broader perspective. She also offered a clarifying statement that she had never made "a moral comparison between Hamas and the Taliban and the US and Israel."

Omar's tweet was also sent in the context of an ongoing debate about America exempting itself from the International Criminal Court, even as American troops abroad are alleged to have committed serious crimes that could otherwise come under the ICC's purview. The Trump administration went so far as to impose sanctions on the top prosecutor of the International Criminal Court after she launched an investigation into war crimes allegedly committed by American soldiers in Afghanistan and the ICC opened an investigation into alleged war crimes by Israel.

The Biden administration lifted those sanctions, but Omar was essentially asking where victims of war crimes are supposed to go to get justice if not the ICC -- and why the US refuses to subject itself to the inquiry of the same institution it trusts to adjudicate war crimes other countries are accused of. The Biden administration has an answer: the US and Israel have judicial systems sophisticated enough to adjudicate these claims themselves (left unexplained was why, if the capabilities are in place, so few of these cases have actually been brought, let alone resulted in justice being done). But that doesn't make it out of bounds for Omar to ask the same question often posed by international human rights organizations and members of the ICC itself.

These two things, in other words, are not comparable: One congresswoman is questioning policy decisions made by her government; the other is comparing Covid-19 restrictions to the mass murder of Jews and the opposition party to génocidaires. And yet it's Omar, not Greene, who Republicans have decided to target for censure.

This hypocrisy, deeply unsettling on its face, is even more troubling at a time when anti-Semitism is on the rise and American knowledge of the Holocaust seems to be waning, with young people radically underestimating the number of Jews murdered. And while Americans generally are fairly knowledgeable about the basics, fewer than half understand that Hitler came to power via democratic processes, according to Pew. American Jews have also been targeted by waves of anti-Semitic attacks in recent years, from Trump-supporting White supremacists in Charlottesville in 2017 chanting, "Jews will not replace us" before a young woman was murdered to more recent spates of violence from New York to Los Angeles. That makes Greene's comments downright dangerous.

Our elected representatives shouldn't be conspiracy-mongering yahoos; they should be people of solid moral character, intelligence and deep commitment to representing their constituents and making America a better place. Greene does not fit the bill. If only her own party had the self-respect to recognize that and demand better.

Gnats and rotten food - Here's a look at Vigo County food inspections for July 19 to July 24.

Mask mandates not here yet, but could be back in the near future

Redistricting in Indiana could impact your vote - here's how

The dangers of working in the heat

Women give back to their community

One local woman shares her story on World Hepatitis Day