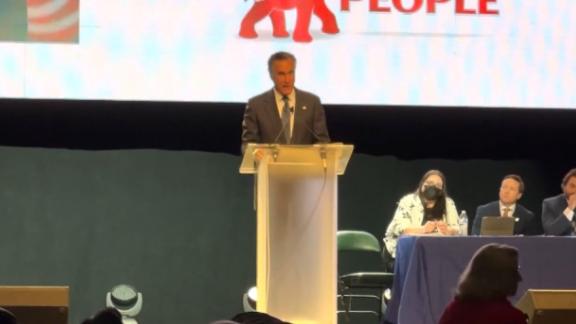 CNN's Pamela Brown and Sen. Roger Marshall (R-KS) discuss his colleague Sen. Mitt Romney (R-UT) being booed at a Republican convention in Utah, and other signs of infighting within the GOP.

Republican Senator Mitt Romney still doesn't get how low his party has sunk. That was painfully obvious when the Utah Senator was "lustily booed" -- as the Salt Lake Tribune put it -- on Saturday by a large swath of the over 2,100 GOP delegates who attended the party's state political convention.

Even Romney's words trying to win the crowd back shows how out of touch he is with the baseness of much of the GOP base: "You can boo all you like, but I've been a Republican all my life. My dad was a governor of Michigan, my dad worked for Republican candidates that he believed in...and if you don't recall, I was the Republican nominee for President in 2012." As if that matters to the those in today's GOP base who idolize Donald Trump.

Loyalty to conservative principles or a long-term commitment to the party is not what defines today's GOP. Instead, disturbingly and potentially dangerous for our republic, is that for much of the GOP base it's clearly still about loyalty to a twice-impeached former President who spewed the Big Lie about the 2020 election results and who called on his supporters to come to Washington, DC, on Jan. 6, leading to the Capitol riot that, as President Joe Biden called it in his speech Wednesday, was the "worst attack on our democracy since the Civil War."

That's why Romney was heckled during his speech, with people calling him a "traitor." It wasn't that Romney -- a man who has served the public in roles from governor of Massachusetts to now as a US Senator -- betrayed America or the GOP's core conservative values. Rather, his determination to stick to his principles made him a traitor to the idol they worship. In fact, the GOP delegates introduced a delegate to censure Romney because he "consistently publicly criticized President Trump."

Romney might take some solace in fact that video from the event does show some people applauding him. In addition, the resolution to censure Romney failed in a close vote of 711 for to 798 against. But that's a far cry from when Romney won the support of nearly 72% of Republicans who voted in Utah's 2018 GOP primary when he first ran for the Senate.

Even though the vote to censure Romney fell short, the language of that resolution serves as another warning about where so many in the GOP base are. The resolution contained unproven conspiracy theories about Biden's family, denied Trump had played a role in the Jan. 6 attack and claimed the "House impeachment managers doctored evidence." In contrast, Romney had stated in late January that, "There's no question but that the President incited the insurrection that occurred," and in February he was one of only seven Republican Senators who voted to convict Trump after the Senate's second impeachment trial for his role in that attack. Romney was also the only Republican senator to vote to convict Trump in his first impeachment trial last year.

Romney is also woefully out of touch with the GOP base when it comes the legitimacy of the 2020 election results. In January, Romney called out fellow Republicans who continued to further Trump's Big Lie, urging them to accept Biden as the legitimate winner of the White House. Back on "planet GOP," a CNN poll released last week found that 70% of Republicans say they do not think Biden legitimately won enough votes to be President.

What I found even more alarming was that this same CNN poll found that half of the Republicans polled still falsely believe there was "solid evidence" that Biden did not win. That was a drop from the 58% who held that view in January but still represents a sizable number telling themselves lies so they can refuse to accept a result they disagree with. That's not how democracies work. In fact, it's how democracies die when people can convince themselves that valid election results are invalid.

There was one final moment in Saturday's convention that hammers home how much Romney is out of step with today's GOP. It came right after he sought to appeal to the raucous crowd of Republicans who were booing him by explaining he stood on principle -- no matter how unpopular -- by declaring, "You know me as a person who says what he thinks, and I don't hide the fact that I wasn't a fan of our last President's character issues."

Instead of earning applause, the cascade of booing drowned out the former presidential nominee, causing him to stop speaking. After a momentary pause, Romney asked the crowd, "Aren't you embarrassed?"

Embarrassed?! No, I'm betting those people booing Romney don't feel any sense of shame for standing up for their beloved Trump despite his track record of bigotry, efforts to delegitimize our democracy and his role in inciting the attack on the Capitol. Rather, I submit they feel proud.

The GOP that Romney and his father once had leadership roles in is gone. In its place is a White nationalist movement filled with people who don't accept the results of an election unless they agree with it and who still worship a man who incited a terrorist attack upon our Capitol. The real question is why would Romney -- or any patriotic American -- even want to associate with those type of people?