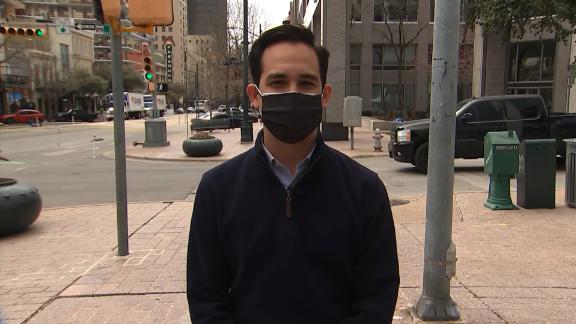 More than 8% of the US population is now fully vaccinated and many are wondering what kind of activities are safe once vaccinated. The CDC issued new guidance today. CNN's Polo Sandoval has the latest from Austin, TX.

Gov. Greg Abbott's decision to "open Texas 100%," lifting all Covid-19 restrictions and end his state's mask mandate on March 10, is a political ploy that places his poll ratings above the health and safety of 29 million Texans. It's a wrongheaded plan that risks prolonging the pandemic and endangering all Americans.

When Abbott issued his executive order on March 2, he said, "People and businesses don't need the state telling them how to operate." His remarks came not long after a brutal winter storm that crippled his state's power grid, leaving millions of Texans shivering in the dark, with Covid still very active in the state, and its vaccination program stumbling badly.

Over the past six weeks, the United States has seen a precipitous drop in Covid cases and a dramatic rise in the rate of vaccinations. In Texas, however, recovery has come slower. On March 2, Texas recorded a statewide test positivity rate over 12%, three times higher than the national average. February's winter storm hobbled vaccination in much of the state, and Texas currently ranks 46th in the US for percentage of residents receiving at least one dose of vaccine. Only 8% of Texans are fully vaccinated.

This is not the first time Abbott has prematurely rolled back restrictions. Last April, with cases rising, and barely two weeks after telling Texans to stay home, Abbott announced, among other things, that the state would allow stores to operate on a retail-to-go basis and that he was considering "the elimination of the stay-at-home policy." He said: "We're now beginning to see glimmers that the worst of Covid-19 may soon be behind us," and added, "We have demonstrated that we can corral the coronavirus." He was tragically wrong. By November, Texas had the highest number of coronavirus cases in the nation.

Since the beginning of the pandemic, Abbott's statewide responses have shuttled between restrictions instituted too late, and measures relaxed prematurely. While the US Centers for Disease Control and Prevention finally recommended on April 3 that Americans wear masks, it was another three months before Abbott issued a statewide mask mandate.

On May 22, Abbott allowed bars in Texas to reopen at 25% capacity, and on June 3 he increased capacity to 50%. But only three weeks later, as Covid-19 cases surged, he again ordered his state's bars to close. He said at the time, "If I could go back and redo anything, it probably would have been to slow down the opening of bars."

In October, Abbott again relaxed restrictions on Texas bars, saying "It is time to open them up." He added, "If we continue to contain Covid, then these openings, just like other businesses, should be able to expand in the near future." Once again Texas saw a massive surge in cases. On January 5, Texas posted a single day record of 31,007 new cases. By mid-January, half of the state's ICUs were full.

More than a year into this pandemic, we know which public health mitigations work. This week, the CDC published a report of the effect of mask mandates and indoor restaurant dining. The researchers found that mandating masks was associated with a decrease in daily Covid-19 case and death growth rates within 20 days of implementation. In-restaurant dining was associated with an increase in daily Covid-19 case and death rates.

The coronavirus is a relentless and opportunistic pathogen that flourishes when we let our guard down. It will not simply go away when we get tired of it. We ignore that fact at our great peril. When Abbott instituted a mask mandate in July, he said, "Wearing a face covering in public is proven to be one of the most effective ways we have to slow the spread of Covid-19."

He was right then, and he is wrong now.

Woman charged after police said she passed out on the lawn of Turkey Run Inn, with unattended children in her room

Two charged in Parke County when police say they were behind the wheel, drunk with kids in the vehicle

Chase and standoff that ended in Vermillion County started as a threat against Illinois gas station employees, according to police

Vigo County 9-1-1 needs dispatchers, here's how you can apply

'It's gotta stop at some point...' Illinois set to add new gas tax July 1, and many aren't happy about it

Washington Community Schools begin upgrades on buildings in it's district

Woman charged after police said she passed out on the lawn of Turkey Run Inn, with unattended children in her room