GOP chaos is a big gift to Democrats 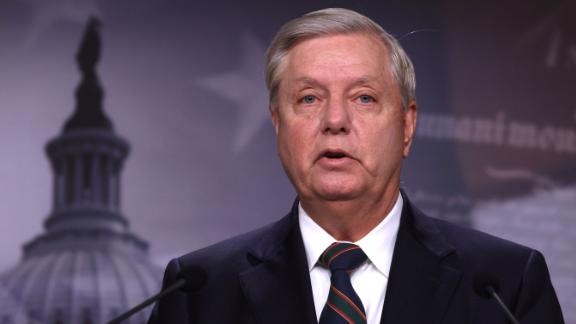 Sen. Lindsey Graham (R-SC) says the ongoing feud between Senate Minority Leader Mitch McConnell (R-KY) and former President Donald Trump has him worried about the GOP's chances in the 2022 midterms.

The acquittal of Donald Trump in his second impeachment trial speaks volumes about the moral fiber of the Republican senators who refused to abandon him. Even more, it shows how the former President, despite his political toxicity, still has a stranglehold on the Republican Party.

This should be an electoral bonanza for Democrats in the months and years to come.

And make no mistake, Trump is toxic.

He lost reelection decisively -- by more than seven million votes overall and by a big margin in the Electoral College. In early January, he was a pivotal factor in the two Georgia runoff election losses that cost Republicans the Senate. And don't forget Trump was also the reason Republicans lost control of the House in 2018.

You don't need to be a professional pollster to understand that Republicans are in trouble among the suburban swing voters who simply loathe Trump. Poll after poll shows this: While the GOP may continue to run up the score in crimson-red states, Democrats will be increasingly competitive in other states with educated, purplish areas, like Arizona, Michigan, Minnesota, Pennsylvania, Wisconsin, and now Georgia.

For its own preservation, the GOP has every reason to figuratively lock Trump in a suitcase and throw him overboard. They had many chances and never took them. In January, they were handed what might have been the widest and easiest off-ramp of the modern political era -- they could have parted ways with a former commander in chief for inciting a bloody invasion of the Capitol that sought to overthrow American democracy.

They balked, and instead set a terrible precedent for the country, effectively dealing all future lame-duck presidents a get-out-of-jail-card for any illegal or unconstitutional actions taken in the final weeks of their presidency.

But not every Republican is beholden to Trump. The 57-43 impeachment vote had seven Republicans supporting conviction -- a testament to the highly fractured nature of the GOP. The party is caught between a more traditional wing that had enough of the 45th President and others who fear the repercussions of breaking with the party's rabid pro-Trump rank-and-file.

If Trump stays in play -- and remains the bogeyman whom most Democrats see as an existential threat to our democracy and country -- he will help keep Democrats united, easing the potentially destructive tensions between the party's progressive and centrists wings.

And if things couldn't get any worse, the House Republican caucus's failure to remove Marjorie Taylor Greene, the rabid conspiracy theorist from Georgia, from key committee assignments has already provided a bounty of content for Democratic ad makers targeting vulnerable House Republicans in swing districts.

All of this paints a less than rosy political and electoral picture for the GOP as they head into the 2022 midterms and look ahead to 2024. Their failure to amputate Trumpism will bring about more painful bloodletting for Republicans at the federal and state level in the years to come; the warning signs are all flashing bright red. As Gallup has recently recorded, nationwide approval ratings for the GOP are down -- with the largest drops among Republicans themselves, which explains the parade of Republicans leaving the party.

Those same political ad makers will have ample fodder for targeting vulnerable Republican senators as well. Of the 34 senators up for re-election in 2022, 17 are Republicans. Another three Senate races, in Ohio, Pennsylvania, and North Carolina, will be open seats currently held by retiring Republicans. Three of the 17 Republicans facing reelection won their last race by less than 10% back in 2016, just as Trump was coming into office.

This puts at least six GOP-controlled Senate seats in play in 2022. Of course, there may be two or three Democratic seats at risk of being flipped, but it's the GOP with a target on its back. For Republicans trying to win over a heavily suburban, educated electorate, Trump, the twice impeached President with record-low approval ratings as he left office, will drag on their races like an anvil.

Typically, a minority party tries to regain power by telling Americans how it would govern better. But whatever criticisms GOP stalwarts will lob at the Biden administration over the coming years may be drowned out by the unremitting cacophony of news about the former President's legal woes and new revelations about mismanagement and incompetence during his tenure. Voters will be constantly reminded how bad things were when the GOP was in power.

This week, the political arm of the House Republicans released a list of 47 so-called vulnerable House seats held by Democrats that they are aiming to claw back in 2022.

But how does a party that demonstrably failed to vote for impeachment in the House and failed to convict Trump not once, but twice in the Senate, and one that must operate in the shadow of a leader saddled by a laundry list of legal woes expects that will play in the purple-tinged swingy suburbs that are the focus of many of these targeted House seats? Not well, we predict.

A middle schooler was insecure about his haircut. So his principal fixed it himself instead of disciplining the boy for wearing a hat