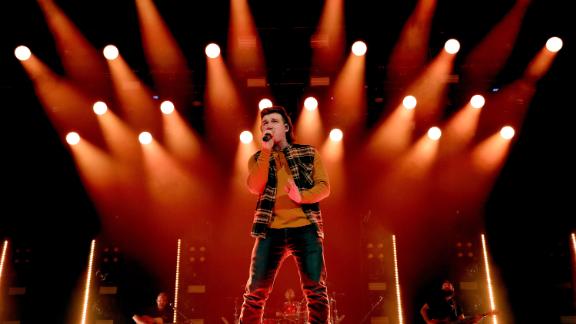 Following a mass shooting at a country music festival in Las Vegas in 2017, there was a great deal of discussion about the culture around the music genre and guns.

Now may be the time for the same regarding racism.

In the wake of country star Morgan Wallen facing backlash following a reported video of him using a racial slur, debate has sprung up regarding race and country music.

"I'm embarrassed and sorry. I used an unacceptable and inappropriate racial slur that I wish I could take back," Wallen said in a statement. "There are no excuses to use this type of language, ever. I want to sincerely apologize for using the word. I promise to do better."

"How do you change it?" guitarist Tomi Martin, who is Black and has worked extensively with country artists, asked. "That's a good question because this is the way country music has always been."

It's a genre that has a long history of being associated with racism and its symbols.

The good ole boy with a Confederate flag has shown up in everything from album covers to music videos.

Much like the contested monuments to Confederate heroes, those who embrace country music could argue that it's more about pride in Southern roots than racism.

Not that there haven't been and aren't Black artists in the genre.

From the late Charley Pride to Darius Rucker and Kane Brown, the genre is more diverse than history sometimes allows.

"I think it's more than just an image of country music — it's been sold as the story of country music," British country singer Yola told Rolling Stone last year. "This myth that won't die of it being 'the white man's blues' is both a good origin story, and kind of erases a lot of what else went into making that origin."

Martin, who has worked with everyone from Michael Jackson to Madonna, as well as country artists like Grammy-nominated singer/songwriter Jamie Floyd, told CNN he believes country music was founded in the Confederacy, so true change could be slow in coming.

The the ongoing racial reckoning following George Floyd's death at the hands of police may be why there has been quick action against Wallen.

The singer-songwriter who last year won the Country Music Association Awards new artist of the year award and best new country artist at the iHeartRadio Music Awards has had his music yanked by CMT platforms, iHeartMedia, and other radio stations across the country.

Wallen's contract has been "suspended indefinitely" by his record label, despite his apology that seemed to follow a playbook of contrition used by other White celebrities that have found themselves in similar circumstances.

"It's like a mental illness -- they can't help it," cultural critic Wes Jackson told CNN of Wallen and other celebrities who have been caught using the N-word. "This White privilege kicks in and for a moment they lose their mind. It's almost like getting drunk. They wake up the next day and they feel so terrible."

Some in country music have signaled that they are no longer content to be associated with a painful history of racism.

The Dixie Chicks last year dropped the "Dixie" in their name and the group Lady Antebellum became "Lady A" (though their following legal battle with a Black artist already named "Lady A" undercut that move in some fans minds).

When rapper Little Nas X was kicked off the country charts in 2019 with his viral hybrid rap-country song "Old Town Road," country star Billy Ray Cyrus stepped up to perform on the remix which then became an award-winning smash hit, including snagging Grammys for best pop duo/group performance and best music video.

But there appears to be some hope that the industry can and will do better.

"Morgan Wallen has been called out and it's high time the Country Music Industry has taken a stand against this type of behavior," the younger sister of Dolly Parton also tweeted. "Now, if we could get them to stand up against sexual abuse! Just sayin' y'all."

Fork in the Road: Does the Micks It Up Diner have the best Beef Manhattan in the Wabash Valley?

If you've recently had the J&J vaccine, watch for these rare symptoms, CDC says

Significant Decline of Women in the Workforce

Practically everything is getting more expensive in America

Vincennes Police continue to search for suspects in recent shooting

The wetlands bill is headed to Holcomb's desk