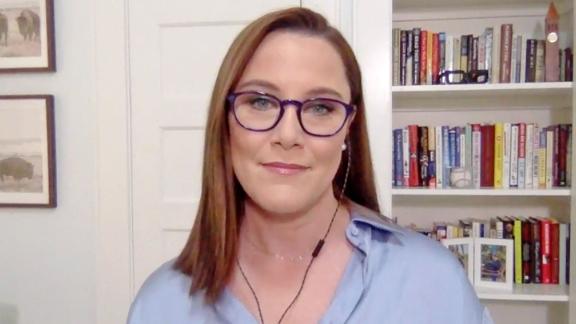 CNN's SE Cupp takes a closer look at Rep. Marjorie Taylor Greene (R-GA) and what, if anything, the GOP is going to do about her incendiary remarks in recent years.

Two decades ago, Secretary of State Colin Powell popularized the "Pottery Barn rule" of invading foreign countries: "You break it, you own it."

Today the Republican Party has been broken by members of its paranoid fringe, like the freshman Georgia Rep. Marjorie Taylor Greene. Now they own it.

CNN's review this week of hundreds of posts and comments from Greene's Facebook account from 2018 and 2019 -- before she was elected to Congress --revealed that she had repeatedly advocated executing prominent Democratic politicians.

It is as bad as it sounds. Greene "liked" a comment that said "a bullet to the head would be quicker" to remove House Speaker Nancy Pelosi, and other comments about executing so-called "deep state" FBI agents. In response to a question directly expressing a desire to "hang" Barack Obama and Hillary Clinton, in 2018 Greene wrote: "Stage is being set. Players are being put in place. We must be patient. This must be done perfectly or liberal judges would let them off."

Greene responded to the CNN report with a Twitter statement. She did not deny the likes and comments, according to CNN's reporting, "but claimed that many people have run her Facebook page. 'Over the years, I've had teams of people manage my pages. Many posts have been liked. Many posts have been shared. Some did not represent my views. Especially the ones that CNN is about to spread across the internet,' she wrote."

She went on to attack the media for trying to "cancel" her because she threatened "their goal of socialism."

Certainly, some might split hairs over how to judge Greene's conduct. Does it matter that she did those things as a private citizen, not an elected official? Would she be responsible if the comments were posted not by her but by her staff? How is an online "like" different from a written comment?

These questions are all beside the point. Greene's online behavior would likely get her fired if she worked at, well, a Pottery Barn. It should be disqualifying for someone in a position of public trust.

In a way, her online behavior is less troubling than the fact that hundreds of her congressional Republican colleagues have stayed silent about it. The reality is that her political party has been hijacked by the conspiracy theorist fringe she represents. A vocal element of the party, with Greene as its drum major, has neutered the party's leadership, and rendered it incapable of condemning even obvious threats to others' safety.

Take the reaction of House Minority Leader Kevin McCarthy to her comments. A spokeswoman for McCarthy called them "deeply disturbing" and noted that McCarthy "plans to have a conversation" with Greene about them.

What "conversation," short of "please pack up your belongings and never return to the Capitol," could possibly be appropriate? McCarthy's lame response suggests two things: either he and the caucus are OK with calls for the execution of political opponents, or they are too craven to denounce them.

The latter seems likely, given how similarly McCarthy's Republican counterparts in the Senate are approaching the impeachment of former President Donald Trump. Senators have privately expressed "disdain" about Trump's conduct both in undermining the result of the 2020 election and in the run-up to the deadly January 6 riot at the US Capitol that put all of their lives in danger. Still, it is widely reported that they are concerned about how a vote to convict Trump might lead to a political backlash.

If unrefuted revelations of online behavior calling for murder are not enough for a member of Congress to be asked to resign immediately, what is? Likewise, if using the power of the presidency to subvert and obstruct the certification of election results, and -- if that weren't enough -- to whip up a mob that attacked the seat of American democracy, leading to a police officer's death, isn't disqualifying from future office, nothing is.

There is a minority of the Republican party that is willing to vote its conscience and defy the party's base. However, it is clear that The Party of Lincoln has now become The Party of QAnon. We can thank Republican leaders, and their terror at the response from the mob -- and the former president -- for getting us to this point.

Cocaine, stolen lawnmowers, and a chase: Police in Knox County bust man they say he fled from traffic stop

A little rain chance - and then nice. Here's look at the weekend forecast