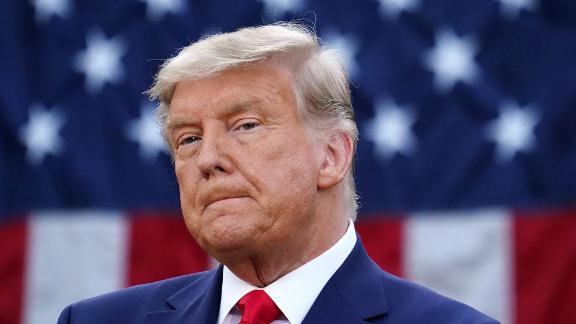 President Donald Trump is backing a lawsuit filed to the Supreme Court by Texas Attorney General Ken Paxton to block millions of votes from four battleground states that voted for President-elect Joe Biden.

By attempting to steal an election, President Donald Trump is waging a war against American democracy. So far, democracy is winning. But the damage he has inflicted on the country will not end with his presidency, and this won't be the last time we see a charismatic politician with dictatorial tendencies attack the US system of government.

That is a danger the United States cannot afford to ignore.

Even after dozens of failed lawsuits, multiple vote recounts, and attacks against election officials who reject Trump's patently false narrative that the election was stolen, the President has refused to concede.

Trump is also leaning on Republicans to act as his accomplices. He has requested to join an absurd lawsuit filed by Texas Attorney General Ken Paxton, asking the Supreme Court to invalidate the ballots of millions of voters in Pennsylvania, Georgia, Michigan and Wisconsin. Seventeen GOP states are also coming along in this unseemly charade, while Trump's ally Rep. Mike Johnson of Louisiana has pressured fellow House Republicans to join in on the effort to overturn the outcome of the election.

Meanwhile, Trump backers in the House intend to raise objections to the Electoral College vote during what is typically a rubber stamp meeting to affirm the results of the election. The process would be complicated, however, since objections would have to be raised by lawmakers from both the House and Senate (So far, Sens. Rand Paul and Ron Johnson have said they are open to that option). Regardless of whether members of both chambers play along, it's clear we are entering uncharted territory.

All of these are starkly antidemocratic moves. By making baseless claims about voter fraud, Trump is trying to cast his fight against the election results as a noble effort to bolster democracy. In reality, Trump is ignoring the mandate of the American people in a desperate attempt to keep his grip on power. Abusing the system and finding loopholes to stay in power is what all dictators do.

Despite a sustained attack by Trump, his lawyers, and his acolytes within the Republican party, American democracy is repelling Trump's attack. That is not only because the Constitution built in protections against tyranny but also because enough Americans believed in democracy to vote and defend it -- even when the President showed contempt for it. It's also a credit to the country's judges, including some chosen by Trump, who tossed out farfetched lawsuits. The decentralized electoral system allowed the states to control the process, making it more difficult for Trump to manipulate it, while the media highlighted Trump's efforts to cripple the postal service ahead of an expected barrage of mail-in ballots and allowed the public to watch the voting and vote-counting process as it unfolded, infusing it with a credibility that Trump has tried to undercut.

As a result, the country was ready for Trump's post-election machinations. We predicted what he would do. For months, Trump claimed without any basis that mail-in votes would be fraudulent. He told us he would refuse to accept the results if he lost. We knew. And we prepared.

While all signs suggest Trump's attempts to overturn the election will falter, the country may not survive another highwire act from another aspiring autocrat, perhaps one more skilled than Trump.

It is therefore imperative that President-elect Joe Biden and the next Congress take action to fortify our democracy before the next election.There are many ways to do this. First, we must make the voting and vote-counting process independent of partisan politicians. Every state should have a bipartisan commission led by individuals of recognized integrity to supervise the election, rather than an individual secretary of state, as happens in many states.

Election officials should also be forced to recuse themselves in situations that present conflicts of interest. We should never again repeat what Georgia experienced in 2018, for example, when then-Secretary of State and current Gov. Brian Kemp supervised the very election he was running in -- and won.

It's also time that we do away with the Electoral College and let the popular vote determine the outcome of the election. But as long as we're stuck with the current system, electors should be required to vote for the candidate who wins the popular vote in their state.

Democracy is winning because the power of the president is limited, local election officials have done their duty, and judges have so far been able to look beyond their personal political preferences and uphold their oath to the Constitution.

Americans breathed a sigh of relief after the country's top soldier, Joint Chiefs Chairman Gen. Mark Milley, declared last month that the military does "not take an oath to an individual...we take an oath to the Constitution."

Such reassurances should not be necessary in the United States. Presidents don't usually try to usurp power. But now that we know that the unthinkable is possible, we need to take action and safeguard our democracy against the next leader, whether it's Trump, or someone else following in his footsteps.

If you don't know where your onions came from, throw them away to prevent salmonella, CDC says

Trump announces launch of his very own social media site

All You Need to Know for Friday