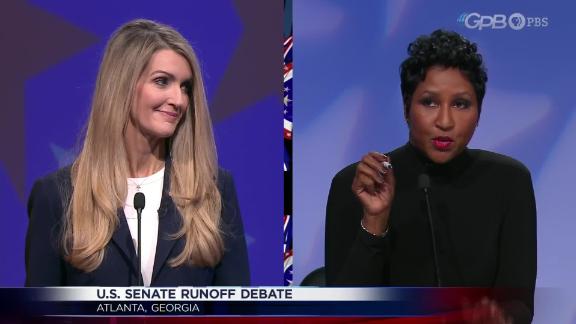 During a debate with Democratic challenger Rev. Raphael Warnock, Sen. Kelly Loeffler (R-GA) was asked about where her loyalties lie: with President Donald Trump or Georgia Gov. Brian Kemp. CNN's Maeve Reston says her answer was "the definition of a dodge."

In the classic holiday Movie "It's A Wonderful Life," George Bailey, played by James Stewart, learned that every time a bell rings an angel gets his wings.

Perhaps it was the holiday spirit coming upon me, but while watching the Sunday night Georgia US Senate runoff debate between Republican Sen. Kelly Loeffler and her Democratic challenger the Rev. Raphael Warnock, I couldn't help thinking that every time Loeffler referred to the pastor as a "radical liberal" or Warnock claimed to be standing up for "ordinary people," a political consultant got a bonus.

Thoughts of holiday cheer aside, while the debate will not go down in history next to the Lincoln-Douglas Senate debates, both candidates did what they needed to satisfy their fans and avoid any significant gaffes. Here were the key takeaways:

In the end, did the debate change the course of the election? Probably not. Both Loeffler and Warnock still face great challenges over the next four weeks until the runoff on January 5.

In ordinary political times, the path to victory for Loeffler should be smoother. Despite President-elect Joe Biden's narrow victory this year in Georgia, voters this fall did not deliver the decisive "blue wave" Democrats hoped for in the Peach State.

In the past, Georgia Republicans have been able to turn disappointment over a presidential race outcome into victories shortly thereafter in US Senate runoffs. Republican Paul Coverdell won his Senate seat in 1992 in a runoff only a few weeks after Bill Clinton won Georgia. In 2008, Sen. Saxby Chambliss similarly won re-election in a runoff after President Barack Obama's victory.

But like everything else in 2020, these are not ordinary political times. President Trump's relentless claims of voter fraud -- which his lawyers have failed to prove in court -- and attacks on Georgia Republicans he deems disloyal have weakened the faith of many Republican voters in the state's electoral system and damaged the reputation of state party leaders who Loeffler needs to spur turnout.

On Saturday, the President began the day with a call to Gov. Brian Kemp insisting that he call a special session of the General Assembly to overturn the election. When the Republican governor refused, Trump once again lashed out at him on Twitter.

That evening, at a rally in south Georgia intended to focus on Republican turnout for Loeffler and fellow Republican David Perdue, the President spent much of his time railing about his election and even saying that he could support someone like Congressman Doug Collins if he challenged the governor in 2022.

As a result, Chambliss called the President's performance a "mixed message" and feared "some people who think that their vote didn't matter [in November]" are "simply not going to come out and vote [in the runoff]."

For his part, Warnock has behind him a more unified party, but will Democratic faithful turn out to vote in the runoff? Key demographics he'll need to connect with will be African Americans and young people. And the challenge facing Democrats should not be understated; Republicans have won every statewide runoff since 1992.

Given that voter participation tends to drop off in runoff elections, Democrats, who will need every vote they can get to buck the Republican runoff winning streak, could face an uphill battle.

In this runoff election, Warnock does not have President Trump on the ballot, or for very long in the White House, to drive up opposition turnout. He has also, so far, proven to be no Stacey Abrams, the popular 2018 Democrat nominee for governor who has a gift for galvanizing her base.

Warnock's performance in the general election was lackluster despite a 10-to-1 financial advantage over all the other Democrats on the ballot combined. While Abrams has lent her formidable campaign infrastructure to the pastor, it is often more difficult to transfer voter enthusiasm.

In conclusion, to clumsily borrow from Shakespeare, the debate was filled with "sound and fury" but signified nothing -- or at least very little -- about the final direction of the campaign. That will be decided in the ground campaign over the next four weeks.

Cocaine, stolen lawnmowers, and a chase: Police in Knox County bust man they say he fled from traffic stop

Vincennes Lincoln falls on the road