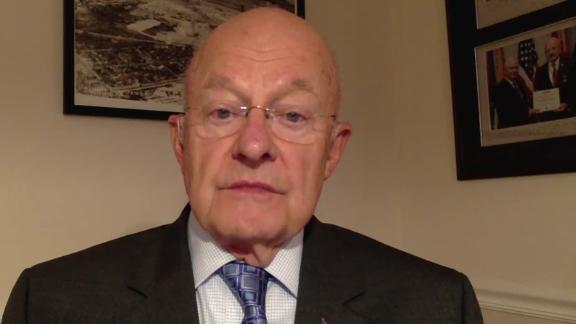 Former Director of National Intelligence James Clapper tells John Berman that the nation's polarization is why Russian disinformation campaigns are so successful against America.

I'm writing as someone who has never cast a ballot in the United States but who has a deep respect for your traditions of democracy. Let me explain why.

I was born in Liberia, where civil war raged from 1989 to 1996 and then again from 1999 to 2003. When I was 15, my family fled our homes to escape the violence, and we went to live in a displaced people's camp in Liberia's Salala district.

I spent a lot of time playing soccer, captaining a team of local kids.

In 1997, Liberia held its first national elections in 12 years. Everyone was nervous because the memories of violence were fresh, and even though a peace process had taken place the year before, we knew how quickly violence could break out. During the civil war, Liberian leader Charles Taylor had led forces known for their exceptional brutality, with violence spreading from Liberia to Sierra Leone. Now the warlord-turned-politician -- who was later to be convicted of war crimes -- was campaigning for President as some of his supporters chanted, "He killed my ma, he killed my pa, but I will vote for him."

When Taylor claimed a landslide victory, post-election violence forced my family to flee again, and I went to find them. Like many families, we had suffered greatly during the war, losing my father and one of my brothers -- may their souls and the souls of those before and after them rest in peace. I was so grateful, however, to reunite with my mother and siblings in Nimba County, near the Ivory Coast border, and to begin a new chapter for Liberia.

In 2005, we faced a great test as a nation, voting again in national elections. What would happen if Ellen Johnson Sirleaf, the candidate for the Unity Party and loser of the 1997 election, emerged triumphant? Would a peaceful transition happen, or would we return to the dark days of violence? No one knew for sure because we had few precedents.

At that point, I was president of the National Youth Council, representing the voices of young Liberians. The election taught me that local groups like the YMCA of Liberia, where I served as a youth leader, had earned everyday trust. In 2005, institutions like the YMCA helped to boost confidence in a fair vote, and Johnson Sirleaf stepped into office on the strength of ballots, not bullets.

For the next post-war elections in 2011, I was working for the peace-building organization Search for Common Ground.

We were worried again about voter confidence, so we helped to form a public committee to oversee and monitor votes, led not by politicians but by prominent citizen-leaders: women activists, religious authorities and media officials. Thanks to years of steady work, these figures had earned community trust and could promote a fair and peaceful vote.

When I think about your choice, American voters, it brings to mind these memories. I think about the winding path of Liberia and also Sierra Leone, where I worked similarly to help strengthen the electoral process. Today, as I read news about the US and observe all your fears, debates and worries, I wish to share some thoughts.

Democracy is a beautiful, fragile thing, so please respect it. Go vote! Billions of people in the world do not have the right that you do, and that -- with great respect -- many of you seem to take for granted: to speak and have your voices heard, to pick the candidate that stands out for you. In Liberia, we waited for decades before we could cast a vote that mattered.

However, democracy is much more than the day of elections. It is about community and trust -- the feeling that all of us are together in the country. In Liberia, elections never would have succeeded if not for the local, everyday groups that served on the Elections Observation Committee. You can play a vital role in building such community trust outside elections. Care for your neighbor, call out injustice and advocate for people who lack a voice. Voting is just one part of citizenship. Helping other people vote, especially those with barriers in their way, is also important.

I know also that democracy can slip away. Hateful rhetoric sows fear and division, which can lead to outright conflict. Take care, be vigilant and do not dismiss the warning signs of violence. One of the strange secrets of war is that ordinary life continues. Violent conflict can creep up on you, like the darkness of night arriving in gradual shades. The creeping menace can desensitize you until the hour is too late.

Liberia is not a perfect country, and we have many economic and social problems that desperately need solving. However, we managed to emerge together from a long, brutal civil war, and observers recognized our 2017 election as peaceful and credible. In the early 1990s, it felt like an illusion to think that we could live together in peace. Really, the only illusion was that hope was dead.

Today, as your neighbor and friend across the Atlantic Ocean, I am watching your election with great interest and care. Know that people before you -- in Liberia, Sierra Leone and many other countries -- have weathered difficult elections. Know that these people have found a resilience that they never imagined. And know that this resilience lives in you as well.

Your friend, always with kindness,