Covid-19 is surging in small-town America 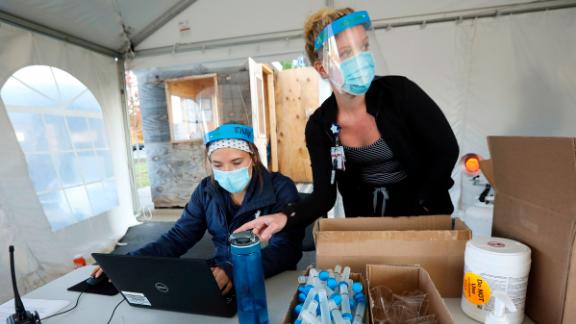 CNN's Erica Hill reports on the rising number of Covid-19 hospitalizations states are seeing as the US continues to see a steady rise in cases.

After more than half a year of fighting the novel coronavirus, many countries, including the United States, are now experiencing a calamitous upward turn in Covid-19 cases. Last week saw consecutive days of over 50,000 cases nationwide pushing the total number of diagnosed cases over 8 million.

The current surges across the nation, though, are occurring in different areas than the initial spring months of the pandemic, which was most pronounced in large northern cities, or the summer increase among southern states.

According to information from the US Centers of Disease Control and Prevention, the Autumn, 2020 wave of the pandemic is being led by small towns in rural areas.

From the start, Covid-19 data has been tracked according to county population as categorized by the Economic Research Service of the United States Department of Agriculture. The least populous two groups are "micropolitan counties" with 10,000 to 49,999 people and "non-core areas" with fewer than 10,000 people. These less populous counties constitute over 60% of the 3,143 counties in the US, though less than one-sixth of the country's population.

The CDC data reveals that for the last month, the micropolitan and non-core counties have had a sustained, multiweek run of the highest rate of Covid-19 cases per 100,000 population for the first time in the pandemic. In contrast, the new infection rate for large metropolitan areas, once by far the highest, now is the lowest in the country.

In other words, the current increase in the US Covid-19 pandemic is, for now, being felt most acutely by small-town America. Alarmingly, the death rate per 100,000 people for the "non-core" counties is now the highest in the US.

It is unclear why the pandemic is rising so rapidly in these areas but surely it is not because the rest of the country is "immune:" even in the areas hardest hit in spring and summer, the vast majority of the US population remains susceptible to infection.

Perhaps the adherence to social distancing in rural areas is weaker, given that the population density already is so low. Perhaps there is less belief in masking and other interventions to decrease the risk of viral spread. The role of the ongoing outbreaks across colleges also must be considered since many campuses are in small towns.

The correctional facility outbreaks in the state of Oklahoma are representative. More than 15,000 prisoners are incarcerated in the state's 32 Covid-19-affected facilities. According to the CDC, as of Tuesday, 4,597 inmates have developed Covid-19 and 22 have died in Oklahoma. In addition, 105 detention facility staff members have been infected. In the last month, many facilities have seen a substantial rise in cases.

The largest outbreaks to date have occurred at the Eddie Warrior Correctional Facility, a woman's minimum-security facility in tiny Taft, Oklahoma, where 781 of the more than 900 prisoners developed Covid-19 and at least one died and, across the state, in the William S. Key Correctional Center in the even tinier town of Fort Supply, Oklahoma, where there have been at least 900 positive Covid-19 tests among inmates, though most of the infected individuals have since recovered.

That's not all: in September, Craig County, home to the Northeast Oklahoma Corrections Center, had an outbreak affecting almost half of the prisoners, and at one point ranked as the county with the second highest new infection rate in the country.

This phenomenon is occurring in other states. Toole county in Montana, home of Crossroads Correctional Center, spent time in the first half of October at or near the top of the same New York Times' hot-spot list and Bon Homme County in South Dakota, where Mike Durfee State Prison has a Covid-19 test positivity rate of 85%, sits near the top of the list now.

The national impact is alarming. The incarcerated population in the US is over 2 million with an additional 423,050 correctional staff. The CDC reports that, as of Sunday, 1,302 correctional facilities in the US have diagnosed 154,398 cases among residents with 1,151 deaths and 33,459 cases among staff, including 59 fatalities.

The specifics of prison life make this not just a humanitarian but an epidemiologic crisis. Many prisons are overcrowded, provide uneven access to medical care, lack capacity to isolate, and are the object of societal neglect. In addition, prison employees may both introduce infection to the facilities or else catch Covid-19 at work and bring it into the community.

The current spike of Covid-19 cases in small, sparsely populated areas is evidence of the interconnectedness of communities, which makes the spread of this contagious respiratory virus an easy piece of business. Surely new investigations will lead to new guidelines and this latest pandemic wrinkle will come under better control, though probably later rather than sooner.

But the endless stream of outbreaks here, there, and everywhere will not stop until we have an actual evidence-based, thoughtfully enforced national plan to reduce spread at places -- prisons, nursing homes, meatpacking facilities, schools, stadiums, political rallies -- where people gather.

Until then, we should anticipate that every few months will just be déjà vu all over again.