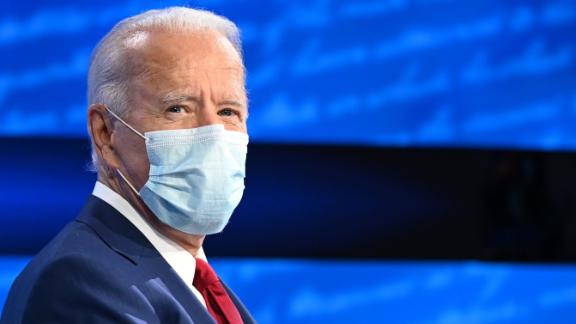 Democratic presidential nominee Joe Biden would not answer whether he supports expanding the number of Supreme Court justices, but said he would answer before Election Day.

There's some comfort after watching former Vice President Joe Biden's Town Hall on ABC: The 17 million Americans who have already voted didn't miss a thing. It was 90 minutes of nothing new, nothing eventful, nothing earth-shattering. The truth is, no news is just fine when you are the frontrunner. When you're leading key polls by double digits with less than three weeks until the election, you don't run your mouth, you let the clock run out.

I'll lay out the good, the bad, and the ugly from the night.

The good point for Biden is that he managed to often make this a referendum on President Donald Trump. Democrats have to think this is their best strategy. Try and convince the American people that the current President has failed on key issues such as Covid-19, the economy and race relations.

On Covid, Biden said that the words of a President matter and "when a president doesn't wear a mask... then people say, well, it mustn't be that important."

Biden said if he were president, he would lean on governors to mandate mask use.

On race relations, he hammered President Trump by saying if he's president voters won't hear him "race-baiting" or "dividing." Instead, they will hear him "trying to unify."

The bad is Biden's not-too-credible answer on fracking. Despite saying that he does not propose banning fracking, he pledged during the primaries to "establish an enforcement mechanism to achieve net-zero emissions no later than 2050," which, as CNN has reported, "would almost certainly require a significant reduction in fracking."

His denials that he would ban fracking are simply not credible. Even host George Stephanopoulos said "not everyone buys your denial."

This is an important issue for voters in the key state of Pennsylvania.

Instead of answering the question, he filibustered on renewable energy, zero emissions, and hauling chicken manure. While he talks of transitioning to new technologies, the truth is Biden is beholden to the far-left policies of the Green New Deal. In an effort to not alienate moderates, his campaign site calls the policy "a crucial framework." You can't have it both ways.

Another bad reply deals with the 1994 Crime Bill. When asked if it was a mistake to support the bill, Biden said yes, but only with regard to what happened on the state level. He neglected to mention he wrote the bill; it was his signature piece of legislation.

The ugly is Biden's outright refusal to tell us where he stands on the issue of expanding the Supreme Court if elected president. The Democratic nominee again refused to go on record about court packing. Expanding the court is supported by the far-left base attempting to dilute the power of the majority of conservative justices on the Supreme Court. Even CNN Democratic commentator Van Jones gave Biden a "D-" on this response when talking with Anderson Cooper.

Biden says he's "not a fan" of court packing, and claims he will provide a more clear answer before Election Day. I don't believe it.

The former vice president heads into next week's scheduled debate in the pole position: in the front row, leading in the polls, with momentum on his side. From a campaign standpoint, I expect him to play it safe. From an American voter standpoint, I'd prefer him to come clean on key issues.