The only sure way to prevent Trump from killing democracy 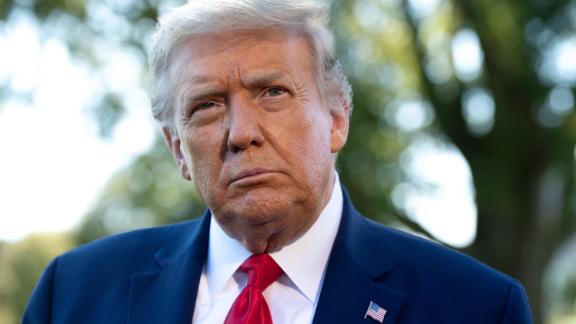 The Atlantic staff writer Barton Gellman tells CNN's Don Lemon that he believes President Trump will not concede defeat if he loses the 2020 presidential election.

President Donald Trump refused to commit to a peaceful transfer of power if he loses the election, raising the already blaring alarms over threats to America's democracy to a deafening volume.

There's no clearer demarcation between democracy and autocracy than the peaceful transfer of power after an election. Trump showed us on Wednesday that he is prepared to cross that line.

Any other president, at any other time in the history of this country, would have had a simple, straightforward answer, when asked if he would accept the results of the election. Any other president would have affirmed his respect for the will of the people -- the hallmark of democracy. But when Trump was asked that question, his response was a shrapnel-filled grenade. Here's what he said:

I'll resist the temptation to clean up Trump's syntax in search of a cogent answer. But it is clear he's signaling -- once again -- that he has no intention of accepting the results if he loses. It is also evident that his monthslong effort to claim mail-in ballots are prone to fraud -- something experts agree is extremely rare -- is designed to hand Trump and his backers a path out of defeat.

US Attorney General William Barr has previously dismissed claims that Trump would try to seize power if he lost the election and accused Democrats of fearmongering instead. But Barr has also supported Trump's attacks on mail-in voting, and experts fear he could play a role in influencing the outcome of the election.

When asked about Trump's comments, Democratic candidate Joe Biden responded with disbelief and asked, "What country are we in?" Biden, knowing how Trump might play the comment, went on to say, "I'm being facetious -- what country are we in? Look, he says the most irrational things. I don't know what to say about it, but it doesn't surprise me."

The President has made clear that this election is not simply a choice between Trump or Biden. It's a choice between an accelerated dismantling of America's democracy, or a return to America's centuries-long struggle to become a more perfect union -- a nation that more faithfully reflects its founding ideals of democracy and equality.

Trump also revealed, perhaps unwittingly, that he does not think he will handily win the election. He seems intent on sowing chaos and confusion and attacking mail-in ballots, which could potentially tear the country apart in an ensuing fight over the election results.

"I think this will end up in the Supreme Court," he said, "and I think it's very important that we have nine justices." Note that there were only eight justices on the court at the time of the 2016 election. Trump could very well pressure his nominee to replace the late Justice Ruth Bader Ginsburg to pledge loyalty to him and his electoral aspirations, rather than a commitment to fairness and the Constitution.

Whatever Trump has in mind, there is only one sure way to prevent a disaster that could engulf the entire country: A landslide victory for Biden would make it more difficult for Trump to remain in office by leveraging the courts, congressional Republicans and even the bands of extremists roaming anti-racism protests aiming to spark more chaos. A decisive electoral result could defang Trump's postelection troops.

But even then, we must prepare for what may lie ahead. The 2016 election offers some clues. Trump, who repeatedly claimed the election was rigged against him, refused to commit to accepting the outcome during the final presidential debate in 2016, saying, "I will look at it at the time. I will keep you in suspense."

Moscow had expected Democratic nominee Hillary Clinton to win, and pro-Kremlin bloggers were prepared to call into question the validity of the results with the hashtag #DEMOCRACYRIP, according to a 2017 US intelligence report.

If Trump loses and rejects the election results this time around, he would create the perfect opening for Russia to delegitimize the new US president. Russia, along with other rivals and enemies of the United States, would delight in the electoral chaos and foster distrust in Biden's mandate.

Trump's most recent assault on democratic practices is hardly his first.

The President has broken the most basic democratic norms by attacking the media, praising tyrants, demanding personal loyalty from government officials, turning the Justice Department into a personal political tool, pressuring public health agencies to downplay a pandemic and stoking internal divisions instead of trying to unite the country.

These are all affronts against democracy, but they are more arcane, perhaps more subtle. Refusing to commit to a peaceful transfer of power after losing an election is pointing a loaded gun to the heart of democracy. Refusing to surrender power is pulling the trigger.

Trump has signaled to his supporters -- in the streets and in the halls of Congress -- that the battle will not end after November 3.

According to Barton Gellman of The Atlantic, Trump's team is already preparing a legal attack on the election results in key battleground states. Multiple scenarios are possible. Gellman envisions one where the battle drags all the way to January 20, with two men showing up to be sworn in.

Others have looked at possible outcomes that might follow an election in which Trump has told his followers, who have shown a willingness to do almost anything to support him, that the vote is rigged. We cannot rule out the prospect of violence. Those wargaming the possibilities have also floated scenarios in which states with Republican-led legislatures, and Barr put their thumbs on the scale to help Trump.

When the election results were inconclusive in 2000 and the Supreme Court handed the victory to George W. Bush, the Democratic candidate Al Gore decided to accept the outcome for the sake of the country.

But looking at the smoldering rage across Americans cities and the polarization that Trump has deliberately stoked, does anyone think a similar outcome is likely this time?

The only way Americans avoid disaster is if they hand Joe Biden an overwhelming, indisputable victory.

Indiana released a draft of their vaccine distribution plan

After visiting a haunted house, an ISU student thought that would be the only scare of his night. He