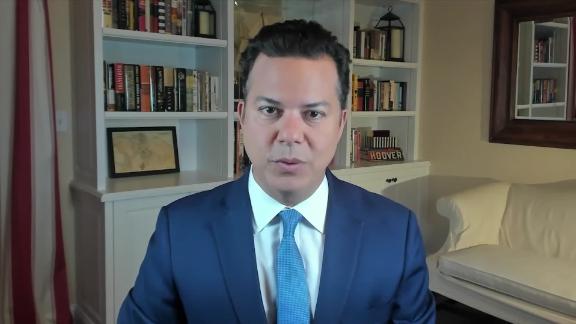 The Senate Intelligence Committee released the most comprehensive and meticulous examination to date explaining how Russia interfered in the 2016 presidential election and the Trump campaign welcomed the foreign adversary's help. CNN's John Avlon breaks down this information.

The news was explosive, but it failed to detonate. Why?

A bipartisan report this week from the Senate Intelligence Committee, which has a Republican majority, laid out in excruciating detail the mutually beneficial actions of the Trump campaign and the Kremlin operation against American democracy in 2016.

The evidence went beyond the Mueller report, more damning than anything we have heard until now. But, with so much going on, and with Trump's time in office possibly coming to an end, few people seemed to pay enough attention.

Perhaps Americans, particularly supporters of President Donald Trump, are looking at this from the wrong angle.

We keep thinking Russian President Vladimir Putin is trying to help Trump. If you like Trump, that may be a good enough reason to look the other way.

But consider that the Kremlin doesn't really care about Trump. Moscow's apparent goal is not to help him. It's clear now that the goal is to undercut, even destroy American democracy. To that end, Trump is nothing but a tool.

The only logical reason Putin is again working to get Trump elected now, which US Intelligence recently concluded, is because Trump is doing such a fine job of chipping away at US democracy. At this rate, Russia could just sit back and watch.

Imagine the exhilaration in the Kremlin as Trump repeatedly refuses to say he will accept the results of the 2020 election, essentially rejecting one of the most fundamental elements of democracy, the peaceful transfer of power.

Putin has almost, almost achieved his goals. In 2016, according to US intelligence agencies, "Russia's goals were to undermine public faith in the US democratic process." Russia's 2016 plan included plans to deploy a hashtag, #DemocracyRIP, to counter an expected Hillary Clinton victory.

Clinton didn't win, but now DemocracyRIP, Putin's evident dream of crippling US democracy, lives on, and it looks distressingly within reach.

In 2016 operation, as the new Senate report shows, the Kremlin slid its tentacles deep inside the Trump campaign, and instead of informing law enforcement, key members embraced it.

Not perhaps, not suspected: a Russian intelligence officer.

Remember all those communications between Trump's now-rescued friend Roger Stone and Wikileaks, which released emails from inside the Democratic campaign just in time for maximum damage at the 2016 Democratic National Convention?

Trump told special counsel Robert Mueller he did not recall talking about it with Stone or anyone in the campaign. The Senate report said, "Trump did, in fact, speak with Stone and Wikileaks and with members of his campaign" about it on "multiple occasions."

And on and on. The Committee provides a litany of examples of mutual benefit enjoyed by Russia and the Trump campaign, and Trump's personal involvement.

Predictably, the takeaway from the report has been twisted by Trump, Fox News and even Sen. Marco Rubio, who chaired the committee when Sen. Richard Burr stepped down after chairing the investigation. "No collusion!" is the crux of their phony claim.

But, as Daniel Goldman, the counsel in the House impeachment replied, "There was plenty of evidence of a criminal conspiracy...there not only was evidence of collusion but there was, in fact, collusion."

Russia's 2016 operation was a raging success. And now, it's on again. US intelligence tells us that Russia is now "using a range of efforts...designed to undermine confidence in our democratic process" and denigrate Joe Biden, the Democratic candidate.

The most striking aspect of this new US intelligence assessment of Kremlin objectives is how closely it aligns with Trump's tactics. To a casual observer, Putin and Trump look like they're on the same team. But that's not quite correct. Putin wants to weaken America. In his desire to win, Trump is helping him.

It's worth noting that Trump could try to win without helping Putin (or anyone else) disparage democracy.

The Senate report suggests that Kilimnik "may have been connected" to Russia's false claim that it was Ukraine that interfered in the 2016 elections. Trump eagerly promoted the theory.

And just a few days ago, Trump retweeted to his 85 million followers an audio recording that US intelligence say is part of the Kremlin's operation against the 2020 US election.

As Trump was amplifying Kremlin disinformation, Russia television was gleefully showing images of America's blue mailboxes, stacked high on the back of a truck, as evidence of America's dysfunctional, untrustworthy democracy - the message from the Kremlin and from the Oval Office are one and the same.

The real "Russia Hoax," we now know, is Trump's absurd claim that the entire investigation into his ties with Moscow in 2016 were fabricated out of thin air. If Trump has one talent, it is marketing, branding, creating something out of nothing. Or, in this case, nothing out of something.

It is happening again. Putin wants Trump to win, but not because he cares about Trump; not because he respects or admires him. Russia's target is American democracy, but this time it doesn't need to work very hard at trying to destroy it.

Trump is trying to bulldoze the system, using Russian propaganda in the process, and he's not even being subtle about it.

Arrest made after brief standoff

No more Work permits for minors in Indiana

Police: Man involved in a two-state chase on I-70 killed himself following Clark County crash

Marshall teenager set to join the Space Force after graduation

Judge says CDC doesn't have authority to issue an eviction moratorium. It's unclear what happens next

Arrest made after brief standoff

How to get your power back after a storm

It is National Travel and Tourism Week, and Southern Illinois is ready for visitors