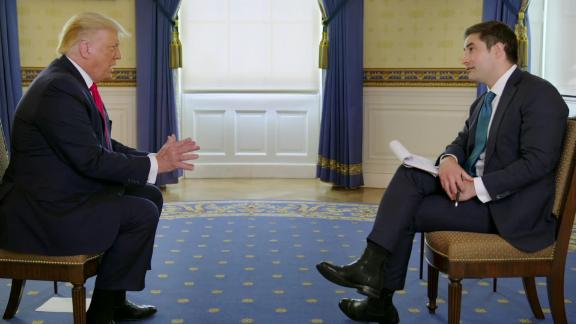 President Trump sat down with Axios reporter Jonathan Swan to discuss a wide variety of topics including the coronavirus pandemic.

President Donald Trump's interview with the Axios reporter Jonathan Swan, published this week, was an abject disaster -- not for Swan, who was admirably dogged and professional, but for the incoherent, appallingly ignorant President of the United States, and for all of us who live in the country he leads.

This was not Trump's first failed interview. Nor did it break entirely new ground in laying bare his inability to grasp basic concepts, his disregard for American lives, his narcissism and pettiness. But the interview did reveal a new set of outrageous and alarming moments from the man who, regrettably, is in charge.

Asked about the legacy of John Lewis, the civil rights icon and longtime Georgia congressional representative, the President said, "I don't know." Given a chance to think about it and try again, he declined.

Instead he went back to his well-worn playbook: first he nursed personal grievance ("He didn't come to my inauguration"), then he bragged about an achievement he hasn't actually accomplished ("Nobody has done more for Black Americans than I have") and then returned to the grievance (Lewis "should have come. I think he made a big mistake by not showing up").

He finally allowed: "He was a person that devoted a lot of energy and a lot of heart to civil rights, but there were many others also."

Asked about America's handling of the coronavirus -- our country has 4% of the world's population but 22% percent of coronavirus deaths -- the President said: "If you look at death ... United States is lowest in numerous categories. We're lower than the world. We're lower than Europe." This is obviously untrue, but Trump brought simple, almost childlike charts showing US deaths as a proportion of total cases, which he thrust at Swan as evidence.

It's hardly a victory that the United States not only has the highest number of total deaths but also extraordinarily high numbers of people who have been infected with coronavirus, the long-term health impacts of which are still unknown. When Swan clarified that "you're doing death as a proportion of cases. I'm talking about death as a proportion of population," Trump lashed out, snapping, "You can't do that." But of course he could -- and as a journalist, should.

When Swan emphasized that a thousand Americans were dying every day from coronavirus, the President responded, "They are dying. That's true. And it is what it is."

Then he claimed the virus was under control "as much as you can control it."

There is no question, at this point, that we in America have a big Donald Trump problem. This President is incompetent. He puts American national security at risk. He has annihilated democratic norms and the institutions that make our nation function. He is reckless with American lives. And by continuing, many months in, to so stunningly fail in his response to the deadly coronavirus pandemic, his presidency should always be mentioned alongside a heartbreaking body count.

But we also have a Republican Party problem, and, let's be honest, a White America problem.

Trump would not be in office if his party did not support, aid and abet him. He would not have succeeded in so thoroughly obliterating the basic principles of the rule of law -- and would not have been able to avoid removal from office -- if the GOP had not completely rallied around him and if so many dyed-in-the-wool Republicans had not gone to work for him and implemented his agenda.

His message would not have resonated if Republicans had not spent decades honing their racist Southern strategy in the wake of the Civil Rights Act of 1964, a tactic of dog-whistle racism perhaps best explained by the late Republican campaign consultant Lee Atwater.

Trump ran to lead a party that had already accrued a base of racist Whites who liked that rhetoric. And he took the longstanding strategy that Atwater so bluntly laid out -- to couch racist politics in race-neutral terms -- and exaggerated it, often eliminating the subtext.

From claiming Barack Obama was born in Kenya to telling an African American audience to vote for him since they were poor and unemployed ("What the hell do you have to lose?") to fear-mongering about immigrants as "rapists" to retweeting White supremacists, Trump took the pervasive but often veiled racism of many in his party and pulled back the cover.

Many in his conservative audience, it turned out, loved it. After his election, he called the White supremacists at whose Virginia protest a woman was murdered "very fine people." For all of the hand-waving about the "economic anxiety" of the White Trump voter, it should have come as no surprise when researchers found that, actually, racial anxiety, xenophobia, and sexism were much larger motivators than finances.

Trump's presidency would be impossible without his base of overwhelmingly White, mostly male, less-educated and disproportionately older supporters. But he also wouldn't be in office without the great many Americans who claim to find him distasteful but voted for him anyway.

Many of them may say their moral compromise means more conservative judges (something Trump has indeed delivered), lower taxes (at least for the wealthy, it turns out), and an end of America playing global policeman (and, they complain, global bank). But they don't seem to think Trump's behavior in office is a deal-breaker: While the President's general approval ratings are in the toilet, 91% of Republicans approve of the way the President is doing his job, according to Gallup polling; just 4% of Democrats say the same.

Monsters don't make us; we make them. It is largely conservative White Americans, long subtly encouraged in their bigotries and entitlements by politicians seeking power, that made Donald Trump.

And until the Republican Party and the people who vote for its candidates decide to put country first -- before their hunger for political dominance, before their desired return to a harsh racial and gender hierarchy -- we will never be free of the Trumpist racism, fecklessness and stupidity that is embarrassing to watch in an interview, and has brought our nation to its knees.

Cade Comes Home: A motorcycle ride to honor local 18-year-old who took his own life

Local bar and restaurant to stay open for Thanksgiving

New rule could allow gas, firing squads for US executions

Business owners gear up for Small Business Saturday at The Meadows

As suicide rates climb, this local group wants to remind people that help is out there

Business owners gear up for Small Business Saturday at The Meadows

As suicide rates climb, this local group wants to remind people that help is out there