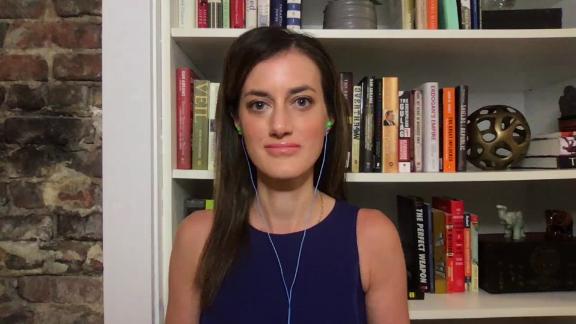 Amid a global pandemic, President Donald Trump's priorities are on full display. With the federal workforce under an unprecedented amount of pressure, Trump chose to engage in his latest, dangerous round of spring cleaning Friday night when he notified Congress of his intent to remove State Department Inspector General Steve Linick.

Linick is the fourth IG or acting IG to be removed in six weeks, and his ouster goes to show that for Trump, getting rid of inspectors general without just cause isn't a coincidence -- it's a trend.

The Inspector General Act of 1987 and other related legislation lay out the IG's responsibility and mandate: to prevent waste, fraud and abuse within the government's bureaucracy -- independently and objectively. The President's attempts to sideline or silence IGs who are fulfilling these responsibilities will only support the politicization of our federal government and prop up officials who accede to pressure and turn a blind eye to wrongdoing.

President Trump is also placing an unnecessary burden on the State Department IG's office, which now has to handle a transition during the pandemic. With many staff members working from home and dealing with the coronavirus, it's hard to imagine that a fully informed handoff can occur.

Linick played a small role in Trump's impeachment inquiry, briefing House and Senate committees and giving them documents that the State Department had received from Trump's private attorney Rudy Giuliani. He also issued reports on allegations that President Trump's political appointees inappropriately retaliated against career civil servants including one of Iranian descent who was, the report found, targeted in part due to her ethnic background. But it's Linick's investigation into whether Secretary of State Michael Pompeo misused a political appointee to perform personal tasks for him and his wife that may be the straw that broke the camel's back.

Trump hasn't yet expounded on why he intends to remove Linick. A president is required to give Congress a 30-day notice of his intention to remove an inspector general, and Trump's letter to House Speaker Nancy Pelsoi on Friday said Linick no longer had his "fullest confidence." (He's disingenuously played this "confidence" card before -- Trump used the same wording when he fired former Intelligence Community Inspector General Michael Atkinson in April). Confidence should be related to a president's assessment of whether IGs are performing their statutorily outlined responsibilities, not whether they meet his personal or political needs.

The Inspector General Act of 1978 says that the head of the department (Pompeo, in Linick's case) "shall not prevent or prohibit the [IG] from initiating, carrying out, or completing any audit or investigation." We don't know specifically if Linick was fired because of this investigation -- which, in a law-abiding administration, would be transitioned to Linick's successor (Stephen Akard, a former Foreign Service officer and an ally of Vice President Mike Pence) -- but a State Department source confirmed that Pompeo made the recommendation for Linick to be removed.

Trump has, for months, retaliated against US government officials such as Health and Human Services Principal Deputy Inspector General Christi Grimm, impeachment witness Lt. Col. Alexander Vindman and others. Aside from pending legislation to safeguard inspectors general, Congress has -- up until now -- not held the President accountable for his recent firings, and Trump may have felt omnipotent in this regard.

Back in April, some Republican senators joined with Democrats and sent Trump a letter demanding an explanation for Atkinson's removal, noting that "Congress intended that inspectors general only be removed when there is clear evidence of wrongdoing or failure to perform the duties of the office, and not for reasons unrelated to their performance." But this letter clearly fell on deaf ears. Trump, in defending his removal of Atkinson, explicitly pointed to the fact that the former IG notified Congress of the whistleblower complaint that eventually led to the President's impeachment. It must be said that Atkinson was acting entirely in line with the law. Despite this blatant act of retaliation, there hasn't yet been a congressional hearing on Trump's actions.

Linick's likely removal in 30 days -- along with Trump's firing of other government officials who, in doing their jobs, dared to upset or defy the President -- comes at a great cost.

The US government is filled with career civil servants who want to serve their country and fulfill their taxpayer funded and often statutorily outlined roles and responsibilities. But the President is sending the message that he is intent on retaining personal publicists and private investigators.

Domestically, this will open the door to the politicization of policy, as well as unchecked waste, fraud and abuse, while creating an environment where government officials will be afraid to speak up out of a fear of retaliation. Plus, it will affect the recruitment and retention of honest and qualified people in the US government.

When it comes to our standing in the world, the President is the US government's worst enemy. Our ability to credibly promote the rule of law, oversight, and accountability overseas -- core priorities for the State Department, Justice Department, and other agencies -- is undercut because Trump is dismantling it here at home.

Congress needs bipartisan support to hold the President accountable for his assault on oversight, otherwise Trump will continue turning the US government into a personal political and vendetta machine.

'The easy thing to do would be to pull the plug, they never took that route,' City of Brazil to host celebration despite COVID-19

NASCAR and IndyCar collide for racing extravaganza at Indy

Rubber Duck Regatta set for Saturday, precautions in place due to COVID-19

Will you be near the water on the 4th of July? Download the Storm Team 10 App