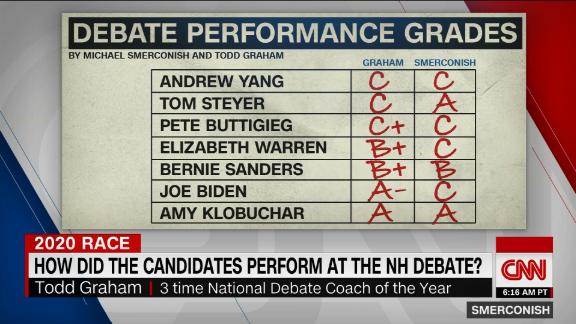 How did the Democrats perform in the crucial debate before the NH primary? 3-time national debate coach of the year Todd Graham matches grades with Smerconish.

Several candidates made strong cases for themselves in the New Hampshire debate on Friday. While Amy Klobuchar came out on top, the grades below indicate just how close the debate was (and unlike the Iowa caucus, you don't need some new app to figure out who performed well).

Sen. Amy Klobuchar avoided most of her previous mistakes (interrupting other candidates and speaking over the moderators) and had her best debate yet. Klobuchar was particularly terrific in the last half of the debate. Her final answer -- in response to a question about the state of our country, where nearly one in five preschoolers live below the poverty line -- was by far the best on stage. She slammed the "complete lack of empathy" from President Trump and made clear that she would support those who have trouble stretching their paychecks to pay for rent. To highlight the contrast between her and Trump, Klobuchar continually repeated, "I know you and will fight for you."

But it wasn't just her final answer. Senator Klobuchar was solid on her defense of voting for the United States-Mexico-Canada Agreement and why big money, voter purges, and gerrymandering are hurting the political process. Finally, Klobuchar pointed to the popularity of the Affordable Care Act, and delivered an excellent defense of keeping it in favor of Medicare for All.

Biden defended the "politics of the past" with more vigor than in any previous debate. He began by mentioning many of the policies he supported, from fighting domestic violence, to banning chemical weapons, and allowing same sex marriage, going on to say, "I don't know what about the past of Barack Obama and Joe Biden was so bad."

Finally, in a uniting stance, Biden asked the audience members to stand and applaud the actions of Lt. Col. Alexander Vindman, who testified in the House impeachment inquiry, only to be fired on Friday by President Trump.

Biden should reiterate his commitment to African-American voters, instead of simply repeating poll numbers that point to their strong support for his candidacy. Finally, Biden should try to remember that his newly found energetic anger isn't appropriate for every answer in the debate.

Senator Sanders was effective in his overall message about corruption, taking on drug companies, and price fixing. And toward the end of the debate, Sanders was persuasive when he brought up the climate crisis and argued that military spending around the world could be better used to fight "our common enemy, which is climate change.".

Senator Sanders took some shots at Pete Buttigieg for courting wealthy donors, which would have been more effective if the Senator had been able to provide clear examples of how campaign money might have influenced specific policy decisions. Sanders also had a bit more trouble on issues like the cost of his health care plan, and gun control, but ultimately came out with decent defenses.

Even though Warren may not have stood out in the first half of the debate, she set up her answers with a clever theme and reiterated the values of the party by stating: "We are Democrats." This played well with her indictment of the overarching corruption in the political system that favors corporations and the wealthy.

Perhaps her best moment came when she criticized Pete Buttigieg's answer on racial disparity in policing, and easily pivoted to the broader topic of why we need race-conscious laws in all areas, including housing, education, employment.

Finally, while I like that Warren seemingly stood her ground on the need to withdraw troops from the Middle East, she then hedged her answer when she was pressed on whether she would maintain a US military presence in the region if her generals advised her to do so by saying, "I want to hear the plan." In the end, I wasn't sure precisely what her position was.

Buttigieg's best moments came when he talked about his own experiences. As a veteran, Buttigieg was excellent when talking about Trump being unfit to serve as a commander-in-chief. He argued that Trump has no regard for the military when he does things like refusing to read the intelligence reports or pardoning war criminals.

Buttigieg had trouble answering a question about why marijuana arrests of African-Americans increased while he was mayor of South Bend, Indiana. And Buttigieg missed his moment when he was criticized for accepting big money donors. His defense -- that Democrats needed to "bring everybody into the fold" -- fell flat. Buttigieg delivered a stronger answer in the previous debate when he said that Democrats needed all the financial help they could get in order to beat Trump.

Steyer's theme was that the Democratic nominee must be able to hit Trump on Trump's best talking point: the economy. Over three different questions, Steyer mentioned how the economy must be central if a Democrat wants to beat Trump. This strong use of repetition played to his strength.

While Steyer's eye contact with moderators, other debaters, and audience members was much better than in previous debates, he still made a basic debating error by bringing up a point without explaining it. Steyer claimed one of Biden's campaign surrogates made a racist remark. Steyer refused to drop this point but did not clearly explain the situation. What happened? I don't know -- because Tom Steyer didn't offer an explanation. Steyer's attack left viewers confused, and Biden went on to brag about his support among the Black Caucus.

I liked that Yang went back to his "Freedom Dividend" -- a $1,000 a month stipend -- as his theme. What hurt Yang in this debate was his inability to tie the idea of a universal basic income to solid evidence that it will help issues from social justice to employment and even addiction. When Klobuchar pressed him, Yang should have interjected and spoken up about how he'd pay for his addiction treatment centers.

Overall, I thought Yang was a bit off in his delivery last night with misplaced pauses, a lackluster speaking style and a rare inability to focus on presenting his most persuasive answers. To be honest, I think not being in the Iowa debate might have thrown off his timing. Both in substance and in style, I've heard Yang give better answers in previous debates.

If you don't know where your onions came from, throw them away to prevent salmonella, CDC says

Trump announces launch of his very own social media site

All You Need to Know for Friday