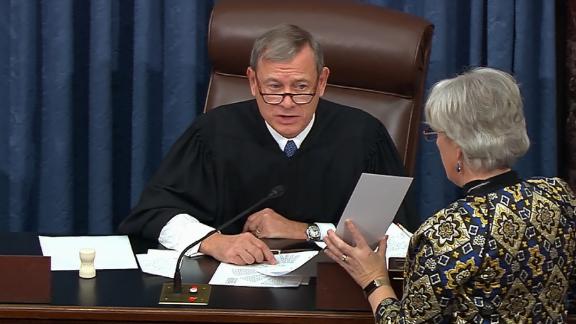 The Senate voted down a motion to compel witnesses and documents at the impeachment trial. The final vote was 49-51 to defeat the motion. Republicans Susan Collins and Mitt Romney voted with the senators who caucus with the Democrats in support of the motion.

The Department of Justice revealed in a court filing late Friday that it has two dozen emails related to the President Donald Trump's involvement in the withholding of millions in security assistance to Ukraine -- a disclosure that came just hours after the Senate voted against subpoenaing additional documents and witnesses in Trump's impeachment trial, paving the way for his acquittal.

The filing, released near midnight Friday, marks the first official acknowledgment from the Trump administration that emails about the President's thinking related to the aid exist, and that he was directly involved in asking about and deciding on the aid as early as June. The administration is still blocking those emails from the public and has successfully kept them from Congress.

A lawyer with the Office of Management and Budget wrote to the court that 24 emails between June and September 2019 -- including an internal discussion among DOD officials called "POTUS follow-up" on June 24 -- should stay confidential because the emails describe "communications by either the President, the Vice President, or the President's immediate advisors regarding Presidential decision-making about the scope, duration, and purpose of the hold on military assistance to Ukraine."

Trump's decision to withhold nearly $400 million in US military aid to Ukraine as he pressed the country to investigate Hunter Biden and Joe Biden, his potential 2020 general election rival, are at the center of the President's impeachment trial. Trump and his allies have repeatedly made unfounded and false claims to allege that the Bidens acted corruptly in Ukraine.

The Senate on Friday defeated an attempt to subpoena documents and witnesses, which could have revealed more about the actions of Trump and the officials closest to him related to Ukraine. Senate leadership on Wednesday plans to hold the final vote to acquit Trump on charges of abuse of power and obstruction of Congress.

Government officials testified in the House's impeachment inquiry to the existence of what appears to be some of the emails.

"The day after DOD issued its June 18 press release announcing $250 million in security assistance funds for Ukraine, President Trump started asking OMB questions about the funding for Ukraine," the House outlined in its impeachment report.

The House noted that the OMB refused to turn over any documents when subpoenaed during the probe, and that emails may exist showing acting White House chief of staff Mick Mulvaney passing along the President's order to halt the aid to Ukraine.

"The Committees also have good-faith reason to believe that the Office of Management and Budget is in possession of and continues to withhold significantly more documents and records responsive to the subpoena and of direct relevance to the impeachment inquiry," the House wrote before it voted to impeach the President for obstruction of Congress.

The filings from the executive branch came Friday to meet a court-ordered January 31 deadline. A judge had specifically asked for an email-by-email breakdown of what the Justice Department redacted or withheld in Defense Department and OMB emails about the aid, and why it did so, after the Center for Public Integrity sued and got access to them in December through the Freedom of Information Act.