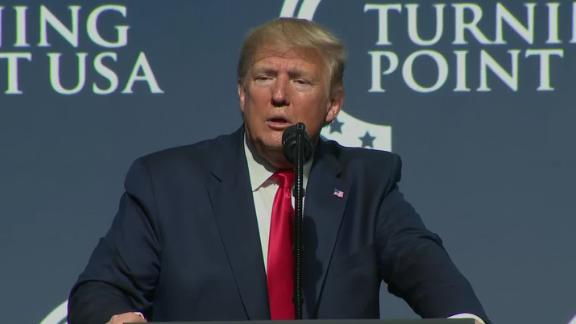 President Trump addressed wind turbines as a source of energy and confused the technology with windmills while speaking at the Turning Point USA conference in Florida.

President Donald Trump kicked off his holiday week with a speech at the Turning Point USA Student Action Summit in Florida on Saturday. Speaking to the crowd of young conservatives, the President touted his knowledge of wind power and turbines, saying "I know windmills very much. I've studied it better than anybody I know." However, several of his claims were false or misleading.

Here's a breakdown of five things Trump got wrong about wind turbines.

Trump referred to wind turbines as "a bird graveyard" telling the crowd that if they "go under a windmill someday, you'll see more birds than you've ever seen ever in your life."

Facts First: Research suggests that while wind power does contribute to bird deaths, more birds are killed by cats or other types of power plants.

According to the US Fish and Wildlife Service, collisions with turbines kills between 140,000 and 500,000 birds annually. Other energy sources, such as coal, oil and power lines, contribute to millions of bird deaths. However, cats remain the biggest threat to birds, killing an estimated 1.3 to 4 billion birds each year.

Trump was adamant that several of his claims about birds and wind turbines were true, saying that "a windmill will kill many bald eagles. It's true. And you know what? After a certain number, they make you turn the windmill off. That's true, by the way."

Facts First: It's misleading to claim that after a certain amount of eagles die, the government makes wind farms "turn the windmill off." However, there is a limit of incidental eagle deaths the wind farms are expected to remain within.

Since 2017, wind farms have been able to apply for an up to 30-year permit that exempts them from prosecution for up to 4,200 eagles killed as a result of the wind turbines. These permits are subject to a five-year review by a third party and require wind facilities to report how many eagles they kill. However, exceeding this limit does not result in a fine or require the facility to shut down its turbines.

Concurrently, the Fish and Wildlife Service does have an Eagle Conservation Plan which suggests "seasonal, daily or mid-day shut downs" as an advanced conservation practice that project developers could be asked to implement if the amount of post-construction fatalities reaches a concerning level, but this is not a requirement under existing regulations.

Trump claimed that wind turbines leave a large carbon footprint, specifically that the manufacturing of wind turbines results in "tremendous amount of fumes and everything."

Facts First: Wind power has the smallest carbon footprint compared to other energy sources, according to the Department of Energy. A 2014 study additionally found that after operating for five to eight months, the average wind turbine will have offset the energy expended during its manufacturing.

The same study noted that "wind turbines produce energy with virtually no emissions." According to the Department of Energy's National Renewable Energy Laboratory, coal-powered electricity releases about 20 times more greenhouse gas per kilowatt-hour than wind.

"You know what they don't tell you about windmills?" Trump told the crowd, "After 10 years, they look like hell. You know, they start to get tired, old. You got to replace them. A lot of times, people don't replace them. They need massive subsidy from the government in order to make it."

Facts First: The government does not provide subsidies for wind turbine repair or replacement. Though wind farms receive a tax credit if they produce a certain amount of energy within their first decade, this subsidy will be phased out by 2020. Furthermore, the average lifespan of a wind turbine is 20-25 years, not 10.

Trump claimed, "If you own a house within vision of some of these monsters, your house is worth 50% of the price."

Facts First: This is not the first time Trump has claimed proximity to a wind turbine impacts property values. However, several major academic studies found no statistically significant decrease in the average property value due to wind turbines in the US.

While some properties may see a decrease in value when turbines are constructed nearby, a 2016 study that analyzed home sales within 10 miles of wind turbines and over 15 years in one state found "no unique impact on the rate of home sales near wind turbines."

Ben Hoen, one of the authors of the study and a researcher at the Lawrence Berkeley National Laboratory, told CNN that the study also found a "majority of those living within a half a mile (from wind turbines) do not believe their property value has been inversely impacted."

You can read a longer fact-check here.