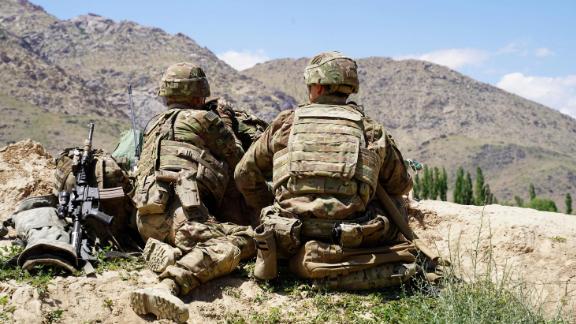 The Washington Post published US government papers about the 18-year war in Afghanistan. CNN's Jim Sciutto takes a closer look.

Sen. Kirsten Gillibrand and Rep. Eliot Engel called for hearings in both the Senate and the House last week after a Washington Post exposé revealed US officials misled the public and concealed unflattering assessments of the country's prospects of winning the war in Afghanistan.

US forces first landed in Afghanistan in 2001, and after 18 years, this has become America's longest war. The conflict, which has led to the deaths of 2,300 US troops, with 20,589 more wounded in action, carries a price tag approaching $1 trillion. According to the Washington Post, which obtained thousands of pages of interviews with people who played a direct role in the war, "U.S. officials acknowledged that their warfighting strategies were fatally flawed and that Washington wasted enormous sums of money trying to remake Afghanistan into a modern nation."

Members of Congress on both sides of the aisle seem suddenly shocked and horrified by the news. But the fact is there have been 45 quarterly reports issued by the Special Inspector General for Afghanistan Reconstruction (SIGAR) since it was created by Congress in 2008.

Each report has clearly demonstrated just how bad the situation on the ground has become. These reports, along with a veritable tsunami of other interim papers, have detailed the failures of these reconstruction programs, along with the egregious waste of taxpayer money and the deadly cost of the war. None of this has been a secret -- I've been monitoring this waste, abuse and corruption through SIGAR's public e-mail list since the beginning. And in all this time, it appears no one has been held to account.

Take the 44th quarterly report that dropped on July 30. In it, SIGAR observed that in the previous three-month period, the size of the Afghan security forces fell to the lowest level in more than four years, while violent incidents surged compared to the same period the year before. SIGAR also noted that the number of attacks on schools in 2018 was triple the number in 2017. To top it off, more than 1,000 schools closed at the end of last year due to the ongoing conflict, and 2.6 million girls across the country were out of school.

And in terms of corruption, SIGAR noted that the Afghan government recovered just 0.2% of $185 million worth of fines and penalties issued by the Anti-Corruption Justice Center of the Ministry of Justice in the three years since its creation.

SIGAR, which has also produced reports examining specific issues like the reintegration of Taliban fighters, offers recommendations to Congress as well as agencies under the executive branch. In one report released in September, John F. Sopko, the Special Inspector General of SIGAR plainly states the failure of the US' reintegration programs, warning that "it is reasonable to assume that millions of unemployed young men will remain at risk for recruitment by criminal groups and terrorist organizations."

Failure of such integration, Sopko wrote, "will only lead to the continuation of a forty-year cycle of war that has led to generations of Afghans growing up knowing only death and destruction."

In the latest "Lessons Learned" report on July 29 SIGAR bemoaned the absence of any "single person, agency, military service, or country responsible for the oversight of all U.S. and international activities to develop the Afghan security forces," despite the reality that "the United States taxpayer has expended more than $18 billion to equip the Afghan security forces, providing over 600,000 weapons; 70,000 vehicles; and more than 200 aircraft."

An audit of the Afghan Air Force Modernization Program earlier this year revealed the Department of Defense was meeting the planned delivery schedule for 159 black hawk helicopters -- with an estimated cost of somewhere between $5.75 billion to approximately $7 billion -- even though the training program to ensure there would be enough Afghan pilots to fly them was not keeping pace.

All this is just a small sampling of findings after 11 years of SIGAR reports. To anyone reading them it comes as little surprise that, as the Washington Post notes (based on confidential government interviews), "President Barack Obama escalated the war and Congress approved billions of additional dollars in support" and "promised to crack down on corruption and hold crooked Afghans accountable. In reality, U.S. officials backed off, looked away and let the thievery become more entrenched than ever."

In his statement calling for hearings in the House next year, Rep. Engel says he's "pressed the Administration to talk directly with the Taliban to find a responsible way to end the war and bring our troops home."

The problem is that these negotiations won't work -- just look at what happened in Vietnam. The North Vietnamese and Viet Cong were waiting for the Americans to leave. I saw, first-hand, the Khmer Rouge do the same in Cambodia. It's likely the Taliban fighters are adopting the same strategy.

Indeed, NBC News reported Monday night that according to three current and former US officials, the Trump administration could be moving in just such a direction -- preparing to announce the withdrawal of some 4,000 troops now and most of the remaining 8,000 by the 2020 elections.

American's failures in Afghanistan have long been chronicled thanks in large part to SIGAR, while Congress has done little more than appropriate more money for a war we haven't been able to win. We must find a way to break this vicious cycle. Perhaps really recognizing what SIGAR has to say would be a good first step.

'This is it. Just relaxing.' Reconnecting with nature during the pandemic

Fork in the Road: Getting a little help from Governor Holcomb