Calls between Giuliani and White House budget office in doubt 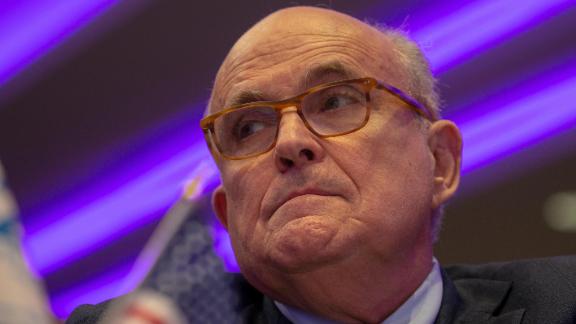 Rudy Giuliani's phone calls with a number that House investigators say is associated with the White House's Office of Management and Budget may have simply been calls to and from the White House, according to information obtained by CNN.

Rudy Giuliani's phone calls with a number that House investigators say is associated with the White House's budget office may have simply been calls to and from the White House, according to information obtained by CNN.

CNN has learned that the number the House Intelligence Committee's impeachment report said was "associated" with the Office of Management and Budget is a number that could go to multiple officials within the White House complex, including the White House itself. Real Clear Politics was first to report on the phone number issue.

The new details cast doubt on whether Giuliani was talking to the Office of Management and Budget in the spring, a critical time in which the ousted US Ambassador to Ukraine Marie Yovanovitch was facing a barrage of now-discredited rumors that she wasn't loyal enough to the President. The calls, in April 2019, were well before any known action by the White House to hold Ukrainian military aid, raising questions as to whether there were discussions earlier than previously known.

The OMB designation appears again, according to the report, in calls with Giuliani on August 8, when US military aid to Ukraine had already been held back.

"The Committees were unable to identify the official associated with the phone number. In the mid-afternoon, someone using a telephone number associated with the Office of Management and Budget (OMB) called Mr. Giuliani, and the call lasted for nearly 13 minutes. Mr. Giuliani called the OMB number and the White House Situation Room several more times that evening, but each time connected for only a few seconds or not at all," the report stated.

The new information does not cast doubt that Giuliani had calls with the White House, only whether those calls were specifically with the Office of Management and Budget.

After the House Intelligence Committee published their report, one senior committee official told CNN that a number that had been associated with the Office of Management and Budget in the report had been "based on public directories," but that they are "continuing to investigate these call records as part of our ongoing work, including to assess whether that number, associated with OMB landlines, may also indicate calls received from elsewhere within the White House. "

After the call logs emerged Tuesday in the Intelligence Committee's report, questions arose about why Giuliani was speaking with someone at OMB.

A spokesperson for OMB told CNN that no one from the agency was ever in contact with Giuliani.

One possibility was that the phone was connected to Mulvaney, who still held his position at OMB. A White House official told CNN on Wednesday that Mulvaney and Giuliani had not discussed Ukraine and Mulvaney's call records never showed he spoke to the President's personal attorney by phone on the dates listed in the report.

Giuliani also said he wasn't involved in withholding the aid to Ukraine and that he never discussed the issue on any call to OMB.

"(I) don't remember calling OMB and not about military aid never knew anything about it," he told CNN via text on Wednesday.

The call log still reveals Giuliani was in regular contact with the White House at a time that House intelligence investigators say was critical to the withholding of US military aid.

The discrepancy comes as House Speaker Nancy Pelosi announced Thursday she asked her committee chairmen to move forward with articles of impeachment against President Donald Trump. The House Judiciary Committee will hold a hearing Monday in which lawyers will present the evidence from the Intelligence Committee's report. The call logs could become a target for Republicans in the hearing.

Hi: 56° Lo: 42°
Feels Like: 42°
More Weather
Tracking showers for the morning and afternoon