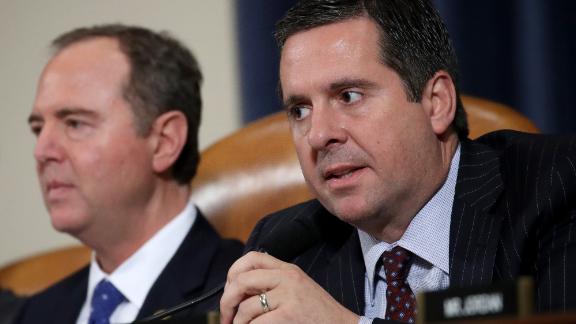 The big takeaways in the House Intelligence Committee report on its impeachment inquiry point to the inescapable conclusion that President Trump abused his office as he asked Ukraine to dig for dirt on his rival Joe Biden.

The report is also filled with a blizzard of details about the President's trusted men. What it says about the culture they inhabit is just as troubling.

One by one, officials in Trump's administration, including cabinet members, seem to have set aside duty and morality in service to a President who considers himself the embodiment of the state. Trump came before country in breathtaking displays of subservience.

In its 300-page report, the committee reveals that the point man was the President's lawyer Rudy Giuliani who schemed for months to set up the Ukraine gambit. In that time, Giuliani, former mayor of New York, frequently called a number the report said was associated with the Office of Management and Budget, which is run by White House Chief of Staff Mick Mulvaney.

The OMB matters because it is the agency that held-up nearly $400 million in approved war-fighting aid Ukraine needed to withstand Russian-backed proxies waging a civil war in its eastern region. Mulvaney matters because he's the man who told the press, falsely, that the politicization of foreign policy engineered by Trump is common and everyone should just "get over it.

The report also notes that Vice President Mike Pence was among the officials who were "either knowledgeable of or an active participant in" the effort. He also joined in the obstruction of Congress alleged by the committee, refusing to supply a single document it requested.

Also in the mix was the ranking Republican on the committee, Rep. Devin Nunes, who it seems was in touch with Giuliani and his helper in this escapade, Lev Parnas, at key moments. No one has been more devoted in his support for Trump than Nunes. The fact that he participated in the committee's work without revealing he was in touch with the Ukraine plotters is at best a profound ethical breach. (The phone records cited in the committee's report don't reveal what Nunes, Giuliani and Parnas discussed.)

The report's rogues' gallery is rounded out by recently departed Secretary of Energy Rick Perry and Secretary of State Mike Pompeo. Both men are noted for their obstruction. Perry is also cited as one of the "three amigos" who worked together to bring Ukraine in line.

As revealed in the report, Giuliani, Nunes, Pence, Perry, Pompeo and Mulvaney are glaring examples of the kind of behavior Americans fear is common at the upper reaches of power. They are depicted in the report as people of poor character who are devoted to winning by any means necessary. (All of them have denied wrongdoing and have contended their actions were proper.)

Your character is what you do when no one is looking. It is driven by virtues like honesty, respect for others, reverence for the law. All of these people appear to lack these virtues. They've gone around doing manipulative and deceptive things and striven to keep them secret.

That they made their way to power is no surprise given who Trump is. Like attracts like in this case. Besides, who else was Trump going to draw near? In rare cases where he has attracted top talent like James Mattis and Gary Cohn, he has been unable to keep them. The ones who stick are the ones who have been tested and shown themselves either to be weaklings or suck-ups who are OK with schemes, conspiracy theories and lies.