Nigeria's 'Lionheart' disqualification is bigger than the Oscars 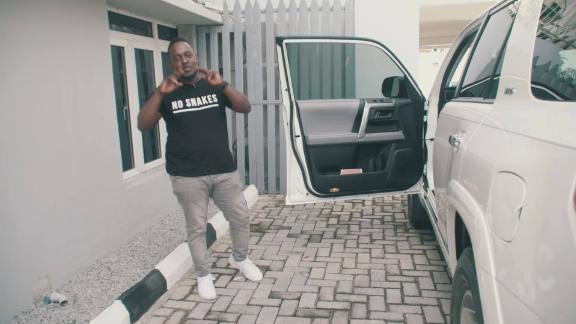 Award-winning Nigerian hip-hop artist, producer and entrepreneur M.I Abaga shares advice for up and coming artists as he drives us to one of his Lagos establishments.

Nigeria's recently disqualified premier Oscar entry "Lionheart" had the makings of a good film -- a film you want to root for.

Acquired by Netflix last year, it was also the company's first original produced in the country, and starred A-list actors from Nigeria's film industry, Nollywood, including Chief Pete Edochie, Nkem Owoh and Genevieve Nnaji. Nnaji also made her directorial debut in the film, a story that centers on a transportation family business and a daughter that seeks to run it -- and save it -- after her father is forced to step down for health reasons and the business's financial troubles come to light.

The rules of the award however, remain the same: Only one film can be submitted per country, it must be produced outside of the United States and, most importantly in this case, must feature a "predominantly non-English dialogue track."

In its statement, The Academy made it clear that the rules would not change: "The intent of the award remains the same -- to recognize accomplishment in films created outside of the United States in languages other than English."

But what if they did change the rules? It could have the unintended consequence of allowing English-language films from Western English-speaking nations such as the United Kingdom

While the UK currently submits non-English language films in this category, including this year's "The Boy Who Harnessed the Wind" which is in both Chichewa and English, it is quite possible that British independent films could eventually dominate the category were the Academy to change only the non-English language aspect of the rule.

Far be it from me, a Nigerian, to demand a rule change that might come to favor my former colonizers.

Still, one cannot help but feel that Nigeria is ultimately being penalized for being a former British colony in using the very language that was imposed on its people, to communicate between them, and especially for art. Former French, Spanish and Portuguese colonies certainly don't have this problem. And in truth, the Academy may be demonstrating a short-sighted or surface-level understanding of its purported inclusivity in this category.

If you're familiar with Nigerian movies, you may have certain expectations of them: regardless of genre, they are often dramatic to the point of hyperbole, are almost always unintentionally funny, usually have some religious underlying themes and what they sometimes lack in production value, they more than make up for in heart and unadulterated entertainment in a Nigerian way.

Indeed, despite criticisms of Nollywood that challenge everything from the quality of its exorbitant output to their class stratification, what is most pleasing as a Nigerian about watching Nigerian movies is that they don't posture to be anything else.

Though it received some favorable reviews, "Lionheart" failed to live up to its potential and even the most avid Nollywood film buff can be forgiven for not taking to it.

Yet, film criticism aside, the disqualification of the country's first Oscar submission in the Best International Feature Film category could spark a much bigger conversation about language and culture. Because it was disqualified for not having most of its dialogue in a language other than English, the film has now become the focus of discussion of The Academy's rules of what can be (or ought to be) considered in the category.

And this discussion is really much bigger than "Lionheart" itself.

There is an argument to be made that with its incredible diversity, Nigeria can simply submit films in any one of its over 500 languages in keeping with the Academy's rules. In fact, contrary to popular belief, most Nigerian films are made with dialogues in one of the country's native tongues. While I couldn't obtain more recent statistics from the Nigerian National Film and Video Censors Board, according to 2011 data, 75% of all Nigerian productions are made in Nigerian languages.

But the reasons English is used in Nigerian films (that are expected to be popular beyond its borders) are historical and practical: Nigeria was colonized by the British, and English is the country's official language. Moreover, in a nation-state with hundreds of languages, the obvious rationale is that English will most likely reach the widest national audience and ensure a potential built-in, English-speaking audience abroad.

What is also usually left unsaid is this: In a country that is so ethnically and linguistically diverse, but also one that is still heavily tribalist, the colonizer's language is more unifying than its citizens might ordinarily like to admit. In a two-part Twitter thread, Nnaji somewhat touched on this: "This movie represents the way we speak as Nigerians. This includes English, which acts as a bridge between the 500+ languages spoken in our country; thereby making us #OneNigeria. It's no different to how French connects communities in former French colonies. We did not choose who colonized us. As ever, this film and many like it, is proudly Nigerian."

Although "Lionheart" has dialogues in Igbo, in its statement, the Academy noted the film "includes only 11 minutes of non-English dialogue." Like many popular Nigerian films that make their way to the global stage, "Lionheart" is predominantly in English -- Nigerian English -- but apparently not distinguishing enough to qualify for the category. In order to meet the Academy's requirements, the 95-minute feature would have needed more than 50% of its dialogue in a language other than English.

If Nigeria's most well-funded, most celebrated, most watched films globally are likely to be in English, then it stands to reason that they will almost certainly never be eligible under the Academy's current Best International Feature Film rules.

As such, whatever the intentions, do the category rules not pragmatically exclude a country that is a significant powerhouse in the business of making movies, and ones that, in spite of its English dialogues, are ultimately "foreign" or "international" relative to the American (film) imagination and experience?

Nigerians subvert the Western understanding of the English language in the country's own standard English, as well as in the use of Nigerian Pidgin English, which is also widely spoken in the country. Were I to speak my linguistic variation of Warri Pidgin from Warri, Delta State -- I can almost guarantee that non-speakers would not understand it.

When I reached out to the Academy to ask whether Pidgin English would be considered a separate language, I didn't receive a direct response, only the standard issued statement.

So it begs the question: Would the Academy have distinguished and not disqualified "Lionheart" if the film had mostly been in Pidgin English? Does the Academy recognize English-based creole languages as English or not? If it doesn't, what does this mean for not only Nigerian Pidgin but say, Sierra Leone's Krio or the variations of Patois spoken throughout the Caribbean? Clearly, the Academy's requirements for this category might not just need a name change, but further review.

As for Nigeria, the country will have to rethink its Oscars strategy if it deems this award category important enough. Until further notice, where the Academy is concerned for Best International Film, Nigeria will have to pick one with predominantly non-English language dialogues.

This way forward will not only be a test of how far Nigeria has or hasn't come with tribalism, but a test of Nigerian unity, and our ability to see ourselves in each other, regardless of what languages we speak.

Indiana on course for school reopenings despite virus jumps

Shortage of court reporters: Officials offer classes for people to explore the job

Fork in the Road: Does the New Goshen Pub have the best burger in the Wabash Valley?