Joe Biden is a man of heart and purpose. But he shouldn't be president 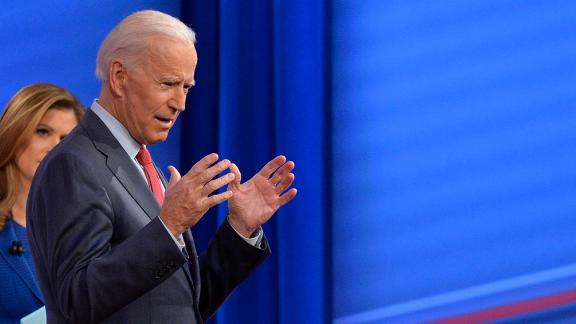 CNN's Erin Burnett asks Democratic presidential candidate Joe Biden if he believes his son Hunter should have to testify in open impeachment hearings.

If anything was clear from Joe Biden's CNN town hall on Monday evening, it is that Biden has served his country honorably -- and that he should not be president of the United States.

There were a handful of bright moments for Biden during the town hall, beginning (and perhaps ending) with foreign policy, a weak point for many of his opponents. Asked whether we need so many US troops overseas, Biden differentiated between bases abroad and troops in combat, outlining a hope to scale back foreign wars without making America retreat from the global stage. It was the kind of lucid and thoughtful answer that has earned Biden the trust of so many Democratic voters, and that stands in such sharp contrast to the current President.

But after that moment of coherence, things went downhill. Over and over again, Biden's answers were rambling and discursive, digressing into only tangentially related side stories and aborted half lines. Over and over again, he failed to answer the questions asked of him. Over and over, he sounded like exactly the man he should be: An elder statesman who had his time in office and now is sitting back and sharing stories of the good old days when politics were kinder and he made the world a better place.

Instead, he's running for president.

Joe Biden is an affable guy. It's no secret why people like him, and why so many connect with his story of familial love and loss. He's a comforting figure, especially in a time when the world seems topsy-turvy and we have a President who has steered America so far away from our ideals. President Trump breaks things -- norms, the rules of American democracy, possibly even laws (though he denies this) -- while Biden promises to patch it all up. Of course a great many voters, according to recent polls, are attracted to that promise of calm and stability, of a return to business as usual.

One problem, though, is that business ceased being usual well before Trump -- something Biden himself witnessed during his time as vice president, but seems to have forgotten (he mentioned Merrick Garland, but didn't seem to draw the right conclusion from that debacle). And another is that Trumpism has severely damaged our democracy.

We need someone who will fight not just to right the ship, but to set it on a better course. Biden made clear in his town hall performance that he just doesn't have his eyes on any particular horizon. On health care, he has values and ideas about what we can't do, not clear and ambitious policy proposals of his own. Medicare for All, he says, will be too expensive (a fair point), but he didn't convincingly articulate why his own policy would be superior. Same with the environment: While he offered up a great start (more trains, more electric car charging stations), he didn't paint the kind of big picture we need to deal with a global emergency.

What Biden was clear on was entitlement: "I'm more of a Democrat from my shoe sole to my ears than about anybody running in this party," he said. Elizabeth Warren in particular seems to stick in his craw. He called her "elitist" for her plan to get everyone health care, accusing her of telling other people what to do -- never mind that that is, in part, the job of a president.

Joe Biden was a good vice president. He is a man of purpose. But he is not a man of vision. He would be head and shoulders better than Trump -- so much better it's laughable and borderline offensive to even compare the two -- but the current race is between Democrats. And this town hall made clear that Biden is not the person who should win.